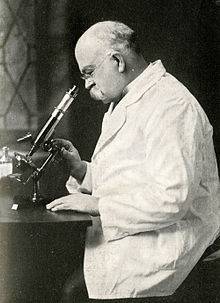 Charles E. Fairman at about age 60

Charles E. Fairman (28 December 1856 – 27 December 1934) was an American physician who published in the field of mycology. He was for many years the health officer of Yates, New York, and on the staff of the Medina (New York) Memorial Hospital. A charter member of the Mycological Society of America, Fairman published several papers relating to fungi including the pyrenomycetes, the Lophiostomataceae, and the fungi imperfecti.

Fairman was born on December 28, 1856 to parents Prof. and Mrs. Charles E. Fairman in Yates, New York, both of whom were teachers.[1] He entered the senior class of the University of Rochester at the age of 16, and was at the time the youngest graduate the university produced. He graduated from that institution in 1873 with an A.M. degree and received his M.D. degree when he graduated from Shurtleff College in Alton, Illinois, in 1877. On February 5, 1878, he married Lois Warren, who died on August 23, 1912.[1]

Fairman had returned to Lyndonville to practice medicine before his 21st birthday. He was a member of several medical societies and wrote for a number of medical periodicals.[1] The fraternity journal Delta Upsilon Quarterly, in their 1890 alumni report, reports him as being employed as the Examining Surgeon for the United States Pension Department in Medina, New York.[2] In July 1927, the New Orleans Medical Association gave him a testimonial dinner in celebration of his 50th year in the practice of medicine.[1]

Fairman achieved worldwide renown as a mycologist. He began studying the fungi at about age 30, when his interest was piqued when he and his father-in-law (Dr. John D. Warren) undertook to cultivate mushrooms. He corresponded with various noted authorities in mycology, including Job Bicknell Ellis, Charles Horton Peck, Pier Andrea Saccardo, Heinrich Rehm, and Joseph Charles Arthur. Fairman also accumulated a large personal collection of mycological books, as well as a personal herbarium of 23,000 various fungi, some of which has been incorporated in the Plant Pathology Herbarium at Cornell University.[3] Fairman also collected specimens for the New York Botanical Garden Herbarium.[4] Fairman was also noted as an authority on many plants.[1]

He spent the majority of his life in Lyndonville, New York, where he was one of the "best known and beloved physicians".[5] He specialized in pyrenomycetous fungi, and mycologist Curtis Gates Lloyd once wrote "Dr. Fairman has probably the best critical knowledge of this difficult group of any one in our country."[6] Fairman died suddenly of a heart attack on December 27, 1934, a day before he was to be honored for his 78th birthday. He is buried in Lynhaven cemetery in Lyndonville.[5]

Fairman's taxonomical contributions were mostly related to pyrenomycetes and the fungi imperfecti. In his later years he specialized in the Lophiostomataceae.[1] Taxa described by Fairman include:[7]

The standard author abbreviation Fairm. is used to indicate this individual as the author when citing a botanical name.[8]