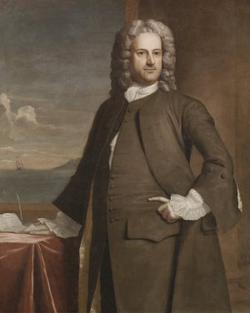 Charles Apthorp (1698–1758) was a British-born merchant in 18th-century Boston, Massachusetts. He ran his import business from Merchants Row, and "in his day he was called the richest man in Boston."[1] He acted for the British government, and supported King's Chapel.

Among the goods imported and/or sold through Apthorp on Merchants Row in Boston were "choice madera wines, ... a parcel of Russia duck and several sorts of European goods";[3] "British duck of all sorts";[4] "choice good sea coal, ... several second hand cables, little the worse for wear, and anchors suitable, with window glass of most sorts, and a parcel of lead and shot";[5] "a good new still and worm of about 600 gallons";[6] "Connecticut pork by the barrel";[7] salt;[8] "a parcel of guns, 4-pounders, with carriages and shott, also a parcel of swivel-guns with shott suitable;"[9] a "well fitted" 50-ton sloop";[10] and "a brigantine about 90 tuns, and three years old, now lying at the Long Wharfe".[11] In the 1730s and 1740s he repeatedly traded in slaves, for instance: "a parcel of likely negros just imported".[12] 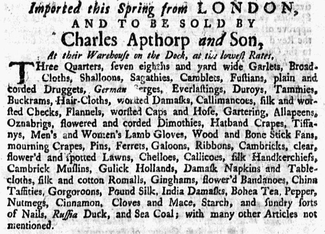 In 1733 Apthorp acted as agent for a man seeking his servant, Hannah Smyth, who had run away with a stolen diamond "and has lately been seen here in Boston."[13] He performed a similar role in 1742, authorized to furnish "five pounds reward" for the return of a "negro man named Jack about 35 years old" to "his master Capt. Stephen Eastwick."[14] In 1756 Apthorp & Son served as agent for someone looking for an anchor lost on Cape Cod "with two iron clasps on one of the flukes, a solid pine buoy, and buoy-rope."[15]

Along with Thomas Hancock, Apthorp represented the British government in its efforts to recruit personnel to Nova Scotia -- ship pilots, bricklayers, carpenters, land settlers, etc.[16][17][18][19] He also served as "paymaster and commissary under the British Government of the land and naval forces quartered in Boston."[2] He was "one of the first wardens of Trinity Church"[2] and donated some 1,000 pounds to the "rebuilding" of King's Chapel.[2]

Apthorp and Hancock together supplied many of the boats used to ethnically cleanse Nova Scotia of the Acadians in the Great Upheaval. The firm also lent money to finance the operation. The poor quality of the ships led to widespread malnutrition, disease, and death among the deported Acadians.[20]

Portraits were made of Charles Apthorp by Joseph Blackburn; John Singleton Copley;[25] and Robert Feke.[26][27] Among the Apthorp's personal possessions were "a set of eight chairs ... probably purchased from the chairmaker and upholsterer Samuel Grant, [with] carving ... attributed to John Welch."[28]

Apthorp died suddenly in November, 1758; he complained "of a slight cold a few minutes before he expired."[29] A New England newspaper reported "the greatest merchant on this continent is gone."[30] His "funeral was attended by very many gentlemen of distinction and principal inhabitants of the town. The streets and windows of the houses, as the solemnity passed along, were thronged with spectators. ... [At King's Chapel] the Reverend Mr. Caner preached a suitable sermon to a crowded audience."[31] A wall marker carved by Henry Cheere memorializes Apthorp inside King's Chapel; it "is crowned by a cherub weeping over a cinerary urn."[32]