The Chard Branch Lines were two railway lines in Somerset, England, that met end on in Chard. The first was opened in 1863 by the London and South Western Railway as a short branch line from their main line. This approached the town from the south. The second and longer line was opened by the Bristol and Exeter Railway in 1866 and ran northwards from Chard to join their main line near Taunton.

From 1917 they were both operated by one company, but services were mostly advertised as though it was still two separate lines. It was closed to passengers in 1962 and freight traffic was withdrawn a few years later. 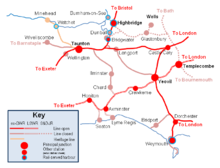 The London and South Western Railway (LSWR) opened its first station serving Chard at 'Chard Road' in 1860 on its new Yeovil and Exeter Railway. The Chard Railway Company was established in 1859 and work started on the branch line from Chard Road to the town on 1 November 1860. The following March the LSWR agreed to purchase the company, a deal that was completed in 1864. The line was opened to the terminus at Chard Town on 8 May 1863 (the original station was renamed 'Chard Junction' in 1872).[1]

Chard had been connected to Taunton in 1842 by the Chard Canal but early proposals to convert the canal into a railway line failed to materialise.[2] Instead the Bristol and Exeter Railway (B&ER) opened a line parallel to the canal on 11 September 1866 using powers initially granted to a Chard and Taunton Railway Company by an Act of Parliament in 1861. In the following year the B&ER purchased the little-used canal for £6,000 and closed it. The B&ER line was single track and connected a new 'Chard station', to the B&ER’s main line at Creech St Michael. Intermediate stations were situated at Hatch and Ilminster, but another was opened at Thorn in 1871.[3]

The LSWR was built to 4 ft 8 1⁄2 in (1,435 mm) standard gauge but the B&ER was a 7 ft 0 1⁄4 in (2,140 mm) broad gauge line until 19 July 1891 when it was converted to standard gauge. Other branch lines around Taunton had been converted between 1879 and 1882 but the Great Western Railway (GWR, which had amalgamated with the B&ER in 1876) left the Chard branch as a broad gauge line to prevent the LSWR requesting access to Taunton.[3] The LSWR extended its line to the B&ER station two months after it had opened and it was then operated as a joint station. During World War I the GWR undertook to work the line from Chard Joint station to Chard Junction station from 1 January 1917,[4] although separate signal boxes were maintained until 1928.[5]

In 1923 the LSWR was itself merged into the new Southern Railway (SR). Two additional stations were opened in 1928 on the GWR section. Both railways were nationalised in 1948 but were initially managed as two separate regions – the GWR becoming the Western Region and the SR became the Southern Region. A fuel shortage in 1951 led to the line being temporarily closed from 3 February to 7 May. Eleven years later passenger services were withdrawn permanently on 10 September 1962 and the line closed completely between Creech and Chard on 6 July 1964. Public goods traffic was retained at Chard until 1966.[4]

The town's public transport links to Taunton are now provided by First Somerset & Avon (bus route 30)[6] and Stagecoach Southwest (bus route 99).[7] Some of the line between Ilminster and Chard, and running through Donyatt and Knowle St Gilesserves as a local cycle path.[8]

All stations were closed on 10 September 1962 unless noted otherwise.[4]

The B&ER opened a station to serve Thornfalcon village in 1871. Originally named 'Thorne Falcon', 'Thorn' by the GWR in July 1890, but was renamed again to 'Thornfalcon' on 1 January 1902.[9] After passenger services were withdrawn the goods yard remained open for nearly two more years, finally closing on 6 July 1964. Just one wooden platform was provided, but this was later rebuilt in concrete. The station has been demolished to make way for the A358 road.[4] A nearby road bridge over the route has been designated as a Grade II listed building.[10]

This is one of the two original stations between Taunton and Chard. It is a Brunel inspired Chalet-style station that served the village of Hatch Beauchamp.[11] A goods shed was provided, and a signal box too from 1892 until 1956 to control a goods loop. Both the passenger and goods buildings are still standing and occupied by industrial users.[4]

Opened on 26 May 1928,[12] this was another simple single platform. This one was a concrete construction on an embankment to serve the village of Ilton. A small wooden shelter was provided, and a wartime pill box was built at the north end of the platform.[4]

This was one of the B&ER’s original stations. It had just a single platform by a loop was provided to allow goods trains to pass. A goods shed and yard was situated to the south of the passenger station. Both the main buildings still stand in commercial use.[4] 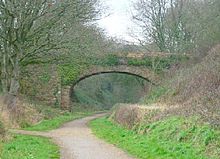 The site of Donyatt Halt

50°55′16″N 2°56′17″W﻿ / ﻿50.921°N 2.938°W﻿ / 50.921; -2.938﻿ (Donyatt Halt) This was a small single platform halt opened by the GWR on 5 May 1928 served the local community around Donyatt.[13] It was constructed from sleepers laid horizontally and pegged together to form a basic platform structure. A small over canopy "shed" served as a shelter during the winter months. Access to the platform was by crossing over the bridge at the Ilminster end of the station and going down an inclined path.

The halt is next to some World War II defences used on the Taunton Stop Line, with anti-tank traps around the station. During the threat of invasion, an inspection post could be quickly setup between Donyatt and Ilminster to stop and check the trains before allowing them to proceed.[4]

The halt has been rebuilt in 2009 as part of a cycle track enhancement project.[14] 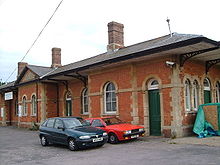 There was a platform covered by a train shed for through trains, and a terminal bay platform at either end. The southern bay platform fell out of use in 1917 when the GWR took to operating trains through to Chard Junction. The sidings at the Southern end of the station were all removed by October 1927 and the signal box at this end of the station was closed the following year.[5] Another name change under British Railways ownership saw it become 'Chard Central' on 26 September 1949.[15] Passenger trains ceased to be operated on 11 September 1962, public goods traffic on 3 February 1964, and private goods traffic on 3 October 1966. The station building and train shed still stand and are in use by engineering companies.[4]

50°52′27″N 2°57′24″W﻿ / ﻿50.8741°N 2.9566°W﻿ / 50.8741; -2.9566﻿ (Chard Town) The first station located in the town was the LSWR’s Chard Town terminus. This single platform opened in 1860 but in 1866 a new line was constructed from just short of the platform to allow trains to enter the new Chard Joint station. For five years trains from the Junction called at Chard Town and then reversed to the connecting line and then resumed their forward journey to the Joint station; trains in the opposite direction had to reverse into the Town station. In 1871 a new platform was opened on the connecting line. The station closed to passengers on 1 January 1917 and was then the main goods station for the town until it finally closed on 18 April 1966.[4] 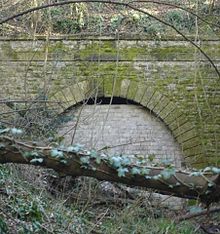 This station was opened by the LSWR on 19 July 1860, as 'Chard Road' on the route from London Waterloo station to Exeter.[15] The word 'Road' in a station name indicated that, whilst it was intended to serve Chard, it was not in the town but rather on the road outside. The branch to Chard opened on 8 May 1863 but the station was not renamed 'Chard Junction' until August 1872. The platform used by branch services was on the north side of the station forecourt, instead of alongside the main platforms which is the usual arrangement at most junction stations. The track layout did not allow trains to run directly between the branch and main line, instead traffic to and from the branch had to be shunted through a connection in the goods yard which was at the Exeter end of the station between the main and branch lines.[1]

It was closed by British Rail on 7 March 1966.[15] The signal box built in 1875 was retained to control sidings and a passing loop and was only replaced by a more modern structure in 1982.[4] There are proposals to re-open Chard Junction as part of a Chard town regeneration scheme; this has the support of Mayor Martin Wale and of David Laws, the Yeovil MP.[18]