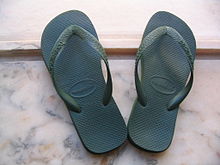 A pair of "Havaianas" flip-flops

Flip-flops, thongs, Japanese sandals, or jandals are an open type of outdoor footwear, consisting of a flat sole held loosely on the foot by a Y-shaped strap, like a thin thong, that passes between the first (big) and second toes and around either side of the foot. Flip-flops may also be held to the foot with a single strap over the front of the foot rather than a thong. 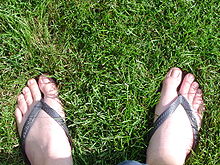 Flip-flops are secured to the foot by a strap of material passing between the toes.

The traditional woven soled Japanese zōri had been used as beach wear in the South Pacific since the 1930s.[1] In the post war period in both New Zealand and America, versions were briefly popularized by servicemen returning from occupied Japan. The idea of making sandals from plastics did not occur for another decade.

The latest design was invented in Auckland, New Zealand by Morris Yock in the 50s and patented in 1957[citation needed]. However, this claim has recently been contested by the children of John Cowie. John Cowie was an England-raised businessman who started a plastics manufacturing business in Hong Kong after the war. His children claim that it was Cowie that started manufacturing a plastic version of the sandals in the late 1940s and that Yock was just a New Zealand importer.[2] The children also say that their father claimed to have invented the name "jandal" from a shortened form of "Japanese Sandal". John Cowie and his family emigrated to New Zealand in 1959.

Despite 'jandal' being commonly used in New Zealand to describe any manufacturer's brand, the word Jandal is actually a trademark since 1957, for a long time owned by the Skellerup company[citation needed]. In countries other than New Zealand, jandals are known by other names. In Australia they are known as thongs. The first pair were manufactured there by Skellerup rival Dunlop in 1959.[3] Thongs became popular there after being worn by the Australian Olympic swimming team at the Melbourne Olympic Games in 1956[citation needed]. In the UK and U.S. they are most commonly known as flip-flops.

Flip-flops may have been familiar in the United States in the mid-19th century. An 1861 letter to the editor of The New York Times mentioned poorly equipped troops in the Seventh Regiment Volunteers wearing "flip-flaps": "The men were not in uniform, but very poorly dressed, — in many cases with flip-flap shoes. The business-like air with which they marched rapidly through the deep mud of the Third-avenue was the more remarkable." Later the letter reads: "The men have not yet been supplied with shoes, and yet still march flip-flop. Why?"[4] The letter does not describe the men's shoes in detail, so it is not clear whether it is referring to footwear of the flip-flop style, or perhaps to the poor state of their shoes.

Flip-flops now come in a variety of shoe styles other than the traditional flat sandal, such as women's heels, slides, and wedges. 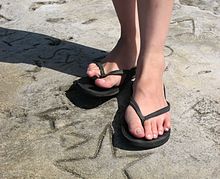 Flip-flops are secured to the foot by a strap of material passing between the toes.

Flip-flops are a common type of footwear. They are a thin rubber sole with two straps running in a Y shape from the sides of the foot to the gap between the big toe and its neighbour. The popular use of flip-flops as beach or outdoor wear has spread through much of the world, although it is most common in India and Pakistan (where it is immensely popular and is called a Hawaii chappal), Australia, New Zealand, South Africa, UK, USA, Brazil, Panama, Israel, the Pacific Islands, and Southeast Asia.

In most developing countries, rubber flip-flops are the cheapest footwear available, often costing less than a dollar. Measures have been made to reduce cost, such as making them out of recycled tires.[5] Because of their low cost they are very widely used in these countries as typical footwear instead of as fashion wear. Despite their disposable design, street vendors will repair worn sandals for a small fee.

However, in many developed countries flip-flops are typically treated as annual or seasonal, short lasting footwear. Depending on the material makeup of the shoe, some pairs of flip-flops last a year or less. The strap between the toes can snap after moderate use, and although this problem can be solved by using replacement straps that are easily "snapped" into the flip-flop, most people in developed countries do not bother to repair flip-flops because they are very inexpensive and easily replaced.

These disposal habits may pose an environmental problem because most flip-flops are made with polyurethane, which comes from crude oil. This material is a number seven resin and cannot usually be recycled in small amounts.[6] Because of growing environmental concerns, some companies have begun to sell flip-flops made from recycled inner tubes or car tires, as well as sustainable materials like hemp, cotton and coconut.

Flip-flops are also popular with those who enjoy being barefoot but need to wear shoes, since they allow the foot to be out in the open but still constitute a shoe for wear in places such as restaurants or on city streets, and can be quickly and easily removed. They are also popular because they are easy to carry and come in an assortment of colors and patterns.

On July 19, 2005, some members of Northwestern University's national champion women's lacrosse team were criticized for wearing "flip-flops" to the White House to meet with President George W. Bush. The women pointed out that their shoes were not "beach shoes," but were dressier thong sandals.[7]

Some flip-flops have a spongy sole, so when the foot hits the ground, it rolls inward and the sponge allows it to roll even more than usual.[8] This is known as overpronation and causes many problems in the foot.[9] Each time a foot hits the ground, the arch is supposed to be locked to absorb shock. But during overpronation, the arch opens and releases this locking mechanism, leading to problems such as pain in the heel, the arch, the toes and in the forefoot. Overpronation of the foot also results in flat feet, especially if flip-flops are worn throughout childhood and adolescence when the muscles, bones, and tendons of the feet are growing and developing. Exacerbating this, some flip-flops force a person to overuse the tendons in the foot, which can cause tendinitis.[citation needed]

Ankle sprains are also common due to stepping off a curb or stepping wrong; the ankle bends, but the flip flop neither holds on to nor supports it.[8] The open nature of flip-flops also makes the wearer more susceptible to stubbed toes, and exposes the foot to the environment. The toe grip can be useful for preventing the foot from slipping forward in a convenient sandal, but flip-flops with bands across higher areas of the foot or the arch are recommended for support and keeping the shoe on the foot. Thong sandals are also popular with the same proportions and structures of flip-flops, but with the addition of a slingback or an ankle strap that holds and supports the foot in a stable position.[10] Arch support is also found in many more expensive and better made flip-flops rather than the ubiquitous foam materials. Spending more on a better quality, better created shoe can influence the wearer's health and safety. Such shoes are also more commonly endowed with rubberized soles and better cushions.

In 2008, Auburn University researchers found that wearing thong-style flip-flops can result in sore feet, ankles and legs. The research team, who presented their findings at the annual meeting of the American College of Sports Medicine in 2008, found that flip-flop wearers took shorter steps and that their heels hit the ground with less vertical force than when the same walkers wore athletic shoes. When wearing flip-flops, the study participants did not bring their toes up as much during the leg’s swing phase, resulting in a larger ankle angle and shorter stride length, possibly because they tended to grip the flip-flops with their toes. This repeated motion can result in problems from the foot up into the hips.[11][12]

In India, flip-flops are referred to as "chappal." Along the east coast of the US flip-flops are sometimes referred to as zories.[citation needed] They are known as jandals in New Zealand, thongs in Australia, Plakkies and slip-slops (or just slops) in South Africa, and go-aheads in the South Pacific. In parts of Texas they are known as clam diggers because of the way they flip sand on a beach. In Brazil called chinelo, sandália or Havaianas. In the Philippines they are mostly called tsinelas. In Hawaii and several other places around the world, they are commonly called slippers. In Greece they are known as sayonares (σαγιονάρες), probably from the Japanese word sayōnara, that means goodbye, because of their Japanese origin. In Poland they are commonly called japonki which indicates their Japanese origin. In Russia and Ukraine they are sometimes called lapti. Americans call them flip-flops.

In recent years, most mass production of flip-flops has moved to developing countries with affordable labor costs. Brands manufacturing in Brazil include Havaianas (São Paulo Alpargatas), Ipanema and Musewear,[13] and in the United States include Craabs (based in California) and Island Slipper.[14](based in Pearl City, HI)

In Japan tabi are a traditional sock with a slot for the thong, and toe socks (with separate compartments for each toe) also mate with flip-flops.