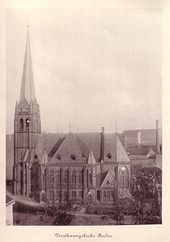 The Church of Reconciliation, pictured in 1899

The church was completed in 1894 as an imposing brick-built building, in the neo-Gothic style. It received some damage in the Second World War, and still has a deactivated American bomb in the basement discovered during the reconstruction in 1999, but the church survived the war. With the division of Berlin in 1945, the church building found itself within the Soviet occupation zone, with most of the parishioners in the neighbouring French zone. This meant that when the Berlin Wall was constructed in 1961, it ran directly in front of the church on its western side and behind it on the eastern side, preventing access to everyone except the border guards, who used its tower as an observation post. The church building was destroyed in 1985 in order ‘to increase the security, order and cleanliness on the state border with West Berlin’ according to the official justification by the GDR (German Democratic Republic) government. Less than five years later, the Wall fell.

The present-day Chapel of Reconciliation: exterior

View from within the outer chapel wall 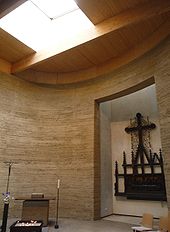 Interior of the chapel

Detail of the altarpiece

In the summer of 1990 the removal of the border fortifications began, leaving the land where the Church of Reconciliation had once stood overgrown with grass and shrubs. While the general trend was to get rid of the physical evidence of Berlin’s division, the Reconciliation Parish considered the most suitable use for the site, in a way that commemorated its past whilst looking towards the future. The result was to build a chapel on the site; a modern construction that considered ecological and historical concerns as well as the needs of its parishioners.

The Berlin architects Rudolf Reitermann and Peter Sassenroth were commissioned to design the chapel. Wooden columns were used for the outer oval wall, which recreates the shape of the chapel’s predecessor and the inner oval of the chapel is made from pressed clay and follows the usual east-west orientation of churches. The chapel was constructed in 1999 under the leadership of the Austrian clay artist Martin Rauch. Volunteers from Open Houses (a German charity founded in 1989 that specialises in preserving endangered historical monuments in east Germany, with the help of foreign volunteers) came form fourteen eastern and western European countries to support the building project. To construct the walls, 30 cm of moist clay was put into position and then compressed by 8 cm, giving the wall’s structure its strength. Within the clay, pieces of stone and even glass are visible and these came from the rubble of the previous church. It is the first clay-built public building to be built for over 150 years in Germany and the first clay-built German church. On the 9th November 2000, on the eleventh anniversary of the fall of the Berlin Wall, the Chapel of Reconciliation was consecrated. 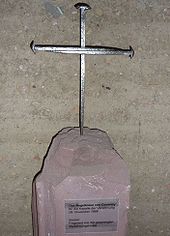 Chapel's replica of the Coventry Cross of Nails

The chapel unites architectural and ecological modernity with remembrance, standing as a triumph against its predecessors destruction. Its memorial and reconciliation roles are recognised by the chapel being part of Gedenkstaette Berliner Mauer (Berlin Wall Memorial) and with it being included in Coventry Cathedral’s Community of the Cross of Nails: a world symbol for reconciliation and peace. The chapel also has a replica of Coventry Cathedral’s Statue of Reconciliation, a gift of the Cathedral found in Hiroshima and Belfast too – also places emerging from the destructiveness of war.

After helping with the construction, Open Houses has continued its involvement with the chapel. Every year volunteers from around the world work at the chapel and help the parish with their work.