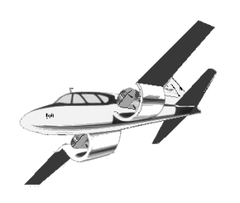 The channel wing is an aircraft wing principle developed by Willard Ray Custer in the 1920s. The most important part of the wing consists of a half-tube with an engine placed in the middle, driving a propeller placed at the rear end of the channel formed by the half-tube. 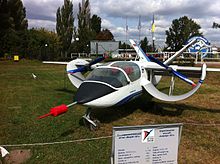 In 1925, Willard Custer had himself observed how very strong winds had managed to lift the roof of a barn. Custer realized it was the high velocity of the wind that created this suction, even when the barn itself was obviously not moving. He started studies into this phenomenon, and by 1928 he had made the first models of a wing with a half-tube-formed section instead of the usual wing profile. This was patented in 1929. Development of the half-tube channel wing was then refined further, and on November 12, 1942, the CCW-1 (Custer Channel Wing 1) airplane was flying for the first time. Custer built additional experimental aircraft; the last one was CCW-5, of which a few were manufactured in 1964. 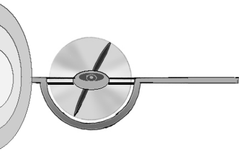 A wing functions because the air over the wing has a lower pressure than the air under it. The conventional aircraft must reach a significant minimum speed before this pressure differential become large enough that it generates sufficient lift to become airborne.

The layout was for a long time not successfully proven in an aircraft, even though Custer showed theoretically and experimentally that the principle was capable of vertical flight. Since they were built with conventional rudders needing some minimum airspeed to be functional, none of the aircraft designed by Custer were capable of full vertical takeoff, but instead were characterized as STOL (short takeoff and landing). The required runway for takeoff was very short, however, 200 feet (61 m) for the CCW-1, 66 feet (20 m) for the CCW-2, with a take off speed of as low as 20 miles per hour (32 km/h). Full vertical takeoff is theoretically feasible, but would require additional modifications and means of control.

Custer investigated both aircraft with pure channel wings as well as aircraft with additional conventional wings located outside of the channels. The construction functions very well at relatively low speeds. At higher speeds, at high propeller RPM, oscillations would occur in the areas around the propeller, causing increased noise as well as creating long term destructive vibrations in the structure.

The twin engine layout featuring two channel wing features, was the most tested configuration. The twin layout had a higher risk of loss of control during a single engine failure situation, and required very high nose up attitude for STOL flight compaired to conventional twin engine aircraft.[1]

Two of Custer's CCW aircraft survive. The CCW-1 is located at the Smithsonian´s National Air & Space Museum in Suitland, Maryland. The CCW-5, which was based on the Baumann Brigadier executive aircraft, is exhibited at the Mid-Atlantic Air Museum in Pennsylvania.

Later, research performed by NASA concluded that the advantage in lift and field length performance achieved did not offset the layout's many deficiencies in climb and high speed ability, and problems meeting certification requirements for general aviation.[2] The main issue is that the semi-circular beam wing configuration incurs increased profile drag and weight penalties over a conventional wing of the same lifting planform, and a common straight wing could provide almost the equivalent lift enhancement when exposed to the same slipstream induced increased dynamic pressure.

From 1999-2004 A joint research project lead by Georgia Institute of the Technolgy Research Institute in Atlanta was funded by Langley Research Center. Aircraft were tested using channel wing principle layouts with circulation control devices that leveraged the Coandă effect. Performance of the wing was increased, and angle of attack was lowered, reducing some of the drawbacks of the design. The resultant design has been patented.[3]