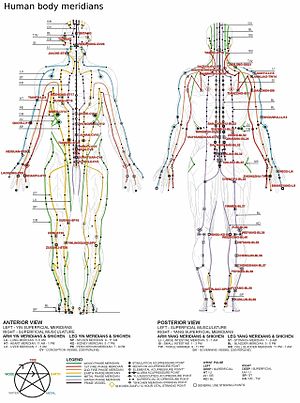 The meridian (simplified Chinese: 经络; traditional Chinese: 經絡; pinyin: jīngluò) is a path through which the life-energy known as "qi" is believed to flow, in traditional Chinese medicine. There is no physically verifiable anatomical or histological basis for the existence of acupuncture points or meridians.

There are about 400 acupuncture points and 20 meridians connecting most of the points, however by the 2nd Century CE, 649 acupuncture points were recognized in China.[1][2] These 20 meridians include the "twelve regular channels" or "twelve regular meridians", with each meridian corresponding to each organ; nourishing it and extending to an extremity. There are also "Eight Extraordinary Channels" or meridians, two of which have their own sets of points, and the remaining ones connecting points on other channels[3][4][5].

The table below gives a more systematic list of the twelve standard meridians:[7]

The eight extraordinary meridians are of pivotal importance in the study of Qigong, T'ai chi ch'uan and Chinese alchemy.[8] These eight extra meridians are different to the standard twelve organ meridians in that they are considered to be storage vessels or reservoirs of energy and are not associated directly with the Zang Fu or internal organs. These channels were first systematically referred to in the "Spiritual Axis" chapters 17, 21 and 62, the "Classic of Difficulties" chapters 27, 28 and 29 and the "Study of the 8 Extraordinary vessels" (Qi Jing Ba Mai Kao) by Li Shi Zhen 1578.

The eight extraordinary vessels are:[9]

In 1694, during the "quarrel of the Ancients and Moderns", after having seen some meridian diagrams from the Lèi Jīng and misinterpreting them as anatomical drawings, British Scholar William Wotton wrote this famous criticism of TCM[10]:

It would be tedious to dwell any longer upon such Notions as these, which every page of Cleyer's book is full of. The Anatomical Figures annexed to the Tracts, which also were sent out of China, are so very whimsical, that a Man would almost believe the whole to be a Banter, if these Theories were not agreeable to the occasional hints that may be found in the Travels of the Missionaries. This, however, does no prejudice to their [Medicinal Simples], which may, perhaps, be very admirable, and which a long Experience may have taught the Chineses to apply with great success; and it is possible that they may sometimes give not unhappy Guesses in ordinary Cases, by feeling their Patients Pulses: Still, this is little to Physic, as an Art; and however, the Chineses may be allowed to be excellent Empiricks, as many of the West-Indian Salvages [Savages] are, yet it cannot be believed that they can be tolerable Philosophers; which, in an Enquiry into the Learning of any Nation, is the first Question that is to be considered.