The Cham Islands (Vietnamese: Cù lao Chàm) constitute a group of 8 small islands of Quảng Nam, which form a part of the Cu Lao Cham Marine Park, a world Biosphere Reserve recognized by UNESCO, in South China Sea in Vietnam.[1] The islands are approachable from Cửa Đại beach. The islands are also recognized as Vietnam’s national scenic site.[2][3]

The occupation of the people of the islands is mainly fishing.[5]

Cu Lao Cham Islands' ancient landscape offers many sand beaches, forested hills and the sea. Facilities for camping, swimming and scuba diving are available. The corals and marine life are an attraction in these island waters.[6] 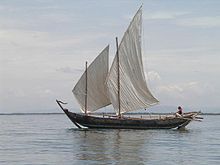 Canoeing to the Islands

The agglomeration of the one large island surrounded by seven small islands cover a sea area of 15 square kilometres (5.8 sq mi); located in South China Sea, 16 kilometres (9.9 mi) from the coast and 19 kilometres (12 mi) to the east of ancient Hoi An town.[3][7]

The largest island, circular in shape, has an area of 1,317 hectares (3,250 acres) with an average altitude of 500 metres (1,600 ft); the two peaks seen on the island are: one a 517 metres (1,696 ft) peak in the centre of the island and another 326 metres (1,070 ft) peak at the western end. On this largest island, the two fishing villages are Bai Lang with docking piers and the smaller village is called Bai Huong.[6] Bai Chong Beach is the most impressive beach on the island. The islands fall under the administrative jurisdiction of Hoi An and acts as a defensive wall for the ancient town.[1][8]

Seafarers were attracted to these ancient islands for favourable anchorage facilities off the Bai Lang village on Hon Lao island where fresh water supply was also located. This is corroborated by early Chinese charts from 700 AD.[8]

The islands are approached by canoeing over three hours journey or by speed boats in about half hour from the nearest coastal shore point.[6]

Archaeologists claim that Cu Lao Cham was first settled by Cham people about 3,000 years ago.[citation needed] However, business contacts were established with other countries about 1,000 years ago. The Cham islands were used for transhipment to the mainland by the Cham.[9] Many architectural monuments dated to the 18th and 20th century are reported, which include Than Yen Sao shrine built in 1843 at Bai Huong, and Hai Tang Pagodas built in 1753 on the western hillside of Hon Lao.[6] Small monuments, Dikes and basins to grow rice on terraces are also seen in the interior forest areas.[6]

The rich aquatic resources of the islands consist of 165 hectares (410 acres) of coral and 500 hectares (1,200 acres) of sea weeds. 135 species of coral, four species of tiger shrimp and 84 species of mollusc are also found in the waters surrounding the islands; some of these species are listed in the Vietnam’s and the World’s Red Book of Endangered Species. Medicinal plants have also been inventoried on the islands.[3]

The traditional resources of the Cham people of the islands comprise rice farming, fishing, trading in pepper, cinnamon bark, ivory and wood with neighbouring countries, accessed through the port of Hoi An.[10]

The islands are known for the Salanganes (Swallows) whose nests have been a source of revenue to the local people. These are in demand as a delicacy, favoured by the rich and famous. The popular expensive Chinese dish made out of these nests is the bird's nest soup. The nests and nest harvesters can be seen on a clear day on the hills of the islands. Thus, Swallow nest harvesting has become an industry in the islands, which provides important revenue to the state.[6][7] The annual Swallow harvest is reported to be about 1.4 tons, valued at US$4,000 per kilogram.[1][6][8]