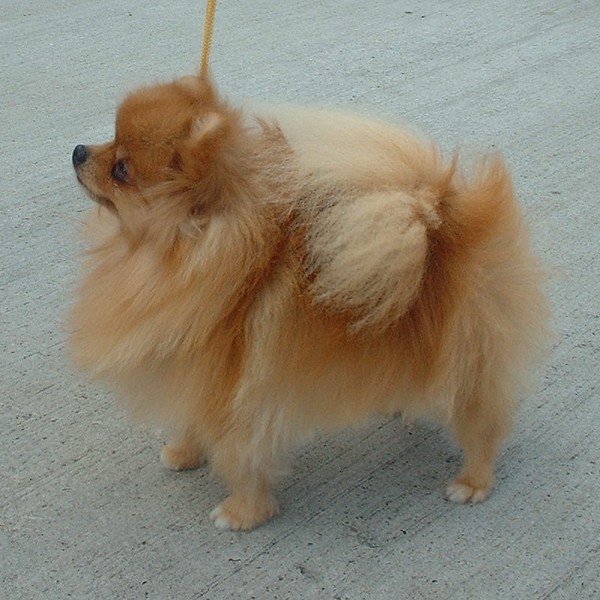 |thumb
image_caption = An orange-sable pomeranian
kcukgroup = Toy
kcukstd = http://www.the-kennel-club.org.uk/discoverdogs/toy/y917.htm
name = Pomeranian
nickname = Pom
nzkcgroup = Toy
nzkcstd = http://www.nzkc.org.nz/br156.html
ukcgroup = Companion Breeds
ukcstd = http://mail.ukcdogs.com/UKCweb.nsf/80de88211ee3f2dc8525703f004ccb1e/43a722d0866052448525704400512701?OpenDocumentThe Pomeranian (often known as a Pom) is a breed of of the type, named for the region in (which today is part of modern eastern and northern ) and classed as a breed because of its small size. As determined by the the Pomeranian is part of the breed, and in many countries, they are known as the Zwergspitz ("`Dwarf` Spitz"), or Toy German Spitz.

One breed standard calls for a cobby, balanced dog: no longer than it is tall.

The head of the Pomeranian is wedge-shaped, making it somewhat y in appearance. The ears are small and set high. Its is characteristic of the breed and should be turned over the back and carried flat, set high. When born, the tail is not spread out; it may take months for it to grow over the Pomeranian's back, and flatten. Beneath the Pomeranian's fur is a small but muscular dog, similar in appearance to a .

At an average of 3 to 7 lb (1.4 to 3.2 kg) according to AKC standards, the Pomeranian (Pom) is the most diminutive of the northern breeds. There are some that may weigh up to 15 pounds or more, and some very rare cases can weight as much as 32 to 35 pounds and have traits back to the larger sled dogs.

The Pom's coat possesses two coats, an undercoat and a top coat; the first is soft, thick, and fluffy; the latter is long, straight and coarse. The undercoat is shed once a year by males, and by intact females when they are in season, after delivering a litter, and during times of stress.

Coat colors vary across the breed. All colors, patterns and variations thereof are acceptable according to the 1997 standard and should be judged on an equal basis. Such colors include: black, black & tan, blue, blue & tan, chocolate, chocolate & tan, cream, cream sable, orange, orange sable, red, red sable, and sable, beaver, brindle, chocolate sable, white, and wolf sable. Patches of one or more colors over a white undercoat are called "Parti-Color." Pomeranians also come in the color merle. There are also tri-color Pomeranians that may be any combination of these colors.

Poms often live 12-19 years. Some very healthy Poms have even been known to live past 20 years of age or more.Fact|date=October 2008

The most common problem in Pomeranians is . Also and hip dysplasia can occur, but are rare in this small breed. (a congenital heart defect) and have become serious problems in Poms.

, tear duct disorders and s that can appear in young adulthood and often lead to blindness are also common. Skin diseases are quite common, especially allergies (that often leads to acute moist dermatitis or "hot spots") and (also known as alopecia X). Other problems that occur regularly include , , and . Occasionally, can occur in Pom puppies. Poms, like many toy breeds, are prone to bad teeth and harmless episodes of . Also, it is important that Poms are trained not to mingle around peoples feet. Because of their loyal tendencies, they will follow from room to room, easily getting stepped on. Their delicate bodies will injure easily this way.

Coat care for the Pomeranian is similar to the . A daily or twice weekly (damp) brushing against the hair is essential to keep the thick, plush coat, which sheds seasonally, free of mats. Brushing also helps to prevent dry skin and dandruff. A Pomeranian's coat needs very little trimming only every now and then. Combing is seldom necessary and sometimes totally unnecessary. Some people prefer to keep the coat short and trimmed, often referred to as a "puppy cut" (hair is cut down to one to two inches long), but most prefer to maintain the long coat with regular brushing and grooming. Regular ear and nail care is recommended, along with generally only peak-seasonal bathing. It is unadvisable to bathe Pomeranians too frequently as excessive bathing can damage their skin and coat by removing essential oils, especially if using anti-flea products. Pomeranians are also prone to teeth problems, and it is recommended that their teeth be brushed at least once a week. Ideally, their teeth should be brushed daily and the dog receive dental and vitamin treats.

Pomeranians are typically very friendly, playful and active. They are very intelligent as toy breeds go and are easily housebroken and trained. Pomeranians socialize well with other dogs and animals. Pomeranians are extroverted and have a lot to say. They can develop the habit of barking excessively if the behavior is rewarded (i.e. allowed to beg for food). Because of their long double-coat, they tend to seek out cooler environments and it is not uncommon to find them laying down on a cold floor or hard surface. Pomeranians have been known to play in their water bowls or spill water in order to lay in it and keep cool on hot days. Pomeranians tend to interact well with their owners in unique ways. They have been known to stare at people, a behavior which many owners find soulful and charming. They also will spin once or twice in a circle when excited. Pomeranians can also walk on their hind legs quite well. Although many people believe the Pomeranian to be a , the breed typically does not like to be held or sit on a person's lap for long periods of time. They are extremely loyal and will sit or lay content at an owner's feet, but normally prefer not to be overhandled. Pomeranians should not be allowed to run free and should always be kept on a leash or enclosed in some kind of yard or inside. They tend to usually be good with kids from the age of 3+ if raised with them from the start. Because of their size, they do well in condominiums and apartments, but they pretty much adapt to any situation or environment. Overall, these dogs make great loving companions.

The Pomeranian originated from the s of and , which were eventually brought into in Pomerania. This region, bordered on the north by the , has been under the control of Wendish Slavs, Poles, Swedes, Danes, Prussians and Germans, at various times, and most recently Poles again. This region extends from the west of the Rügen Island to the . The name "Pomorze" or "Pommern" comes from Slavic "along the sea". Breeders in Pomerania improved the coat and bred the dogs down for city living, but they were still 20 pounds or more when they reached .

English breeders, through trial and error and Mendelean theories, are credited for reducing the dog's size and developing the many colors. The Pomeranian of today is small due to selective breeding, but the breed still retains the hardy disposition and thick coat typical of dogs in cold climates.

Queen Charlotte first introduced the Pomeranian to English nobility; however, the Pom gained international popularity when her granddaughter Victoria returned from vacation in Florence, Italy with a Pomeranian named Marco.

The dogs owned by Queen Charlotte & Queen Victoria were much larger and a . The same is true of any other historical Pom from before the 20th century.

The FCI classifies the as one family consisting of the Dwarf (Pomeranian), Small and Standard (), and Wolfsspitz (). Additional close relatives of the Pomeranian are the , the , and possibly the Samoyed.

The Pomeranian has been among the most popular of dog breeds, consistently in the top 15 of registered AKC dog breeds over the last 10 years. It came in at #13 in the most recently released 2007 rankings and number 10 in 2008. The breed also shows up regularly on television shows and commercials.

* had a Pom who would sit and watch him paint the Sistine Chapel.
* had 2 Poms.
* had a Pomeranian who once upset a candle on his important papers, which contained more than 20 years of research.
* had 3 Poms.
* had 2 poms - one named Turi.
*
* Had a pom named Charlie.
* had a Pom named Snow.