The Challenge 1934 was the fourth and last FAI International Tourist Plane Contest (French: Challenge International de Tourisme), that took place between August 28 and September 16, 1934 in Warsaw, Poland. The four Challenges, from 1929 to 1934, were major aviation events in pre-war Europe. The 1934 Challenge was won by the Polish pilots, who had also won the previous year. 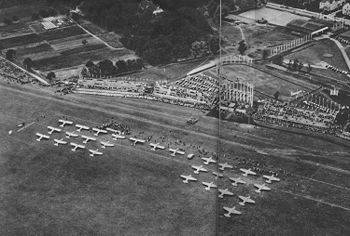 The opening ceremony, from the left: Polish team, three-aircraft Czechoslovak team, German team. The Italian team had not arrived yet.

Poland and the Polish Aero Club organized the contest, because a Polish pilot Franciszek Żwirko won the previous Challenge in 1932. In June 1933 the contest rules were announced. Like the previous contest, it consisted of three parts: technical trials, a rally over Europe and a maximum speed trial, but their details changed. Since one of the aims of the Challenges was to stimulate progress in tourist aircraft development, this time a stress in grading scale was put upon aircraft performance and quality, however pilots' skills remained crucial.

The opening ceremony was held on August 28, 1934 at noon at Mokotowskie field in Warsaw (the Italian team was late by two hours due to weather and arrived during the ceremony). During an air show, a Polish fighter PZL P.7a performing aerobatics crashed, but the pilot survived with injuries.

The number of crews and aircraft that eventually took part in the 1934 Challenge was smaller - 34 compared to 43 in 1932 Challenge, because the contest was getting more difficult with time. The aircraft flew with two-man crews (pilot and mechanic). Teams from only four countries entered the Challenge in 1934: Poland (12 crews), Germany (13 crews), Italy (6 crews) and Czechoslovakia (3 crews). The British aviator Walter MacPherson entered the contest in the Polish team. The French team of eight crews resigned from the contest, because a development of the new plane Caudron C.500 had not finished in time and its weight was too big. The first prize in the Challenge was 100,000 French franc, the second - 40,000 FRF, the third 20,000 FRF, the fourth - 10,000 FRF, 15 other crews would get 6,000 FRF.

The Challenge was to be a contest of tourist aircraft, so competing aircraft had to be able to take at least two persons aboard, take off and land on a short field and cover a distance with a good cruise speed. For this Challenge, all countries designed new aircraft especially to meet the contest demands, the only exception was a single MacPherson's de Havilland Puss Moth, but it was modified as well. All these aircraft were monoplanes with 3 or 4 seats in an enclosed cab, an advanced wing mechanization (flaps, slats and some other devices) and mixed or metal construction.

The Polish PZL.26 of Ignacy Giedgowd in the Challenge markings

On August 29 the technical evaluation of the competing planes' construction started. Since it was a tourist plane contest, features such as: a comfortable cabin with a good view, a presence of the third and fourth seats, seats placed side-by-side, a rich set of controls, ease and time of engine starting, ease of wings' folding, safety devices and a modern construction with usage of metal, were also awarded with points. The view was evaluated by placing a lamp in the cab, in a dark hangar and examining light area. All the German aircraft, two Italian and the Puss Moth exceeded empty weight limit of 560.56 kg and had to have some unnecessary parts dismounted. The first technical trial to be completed was a quick engine starting, carried on 31 August-1 September. Most aircraft scored maximum 24 points in it.

On September 3-4, there was a short take off trial, which required the crews to fly over an 8 m high gate. The best was the Czech Vojtěch Žaček, taking off from the closest distance 74.5 m (Aero A.200), then Jerzy Bajan (RWD-9) and Ján Ambruš with the second A.200. The Polish RWD-9s and PZL.26s and the German Fi 97s were also high, while the Italians and most other German aircraft appeared worse, with results above 100 m. For comparison, the best result from the previous Challenge was 91.6 m.

Next, on September 4-5 followed a short landing trial, behind an 8-m high gate. The best result, 75 m (210 points) achieved Hans Seidemann (Fi 97). In the first ten scores there were other Fieselers, the Polish RWD-9s and PZL.26s and MacPherson's Puss Moth. The Czech A.200s had worse results (above 117 m), along with Bredas and Bf 108s. The best result from the previous Challenge was 92.4 m.

A fuel consumption trial on a 594-km closed circuit was held on September 5. The best were three Bf 108s, scoring 86-95 pts, then five Poles with 73-79 points. Quite good results scored also the Italians, while the German Fi 97s and Kl 36s and the Czechs were worse in this trial.

A minimal speed trial started on August 31, but it had to be continued on September 2 due to weather and some crews completed it only on September 6. The Pole Jerzy Bajan flying the RWD-9 was the slowest with 54.14 km/h speed. Good results below 60 km/h obtained also other RWD-9s, the Czechs and the German Kl 36s and Fi 97s, the worst were Italian Bredas - above 75 km/h, what was not scored (a new device - slots in wings fitted in Bredas, proved useless in practice).

On September 1 there was a trial of quick folding of wings, which was a feature to save place in hangars. Also plane's dimensions and the way of folding were awarded. The trial was completed only on September 6, and first 7 results were of RWD-9s with 36 points, followed by 4 Italians.

One German and one Italian crews damaged their aircraft during technical trials (Bf 108 and PS-1) and had to quit. It was however the best ratio of crews to complete the technical trials of all Challenges. Generally, top places were taken by RWD-9s and Fi 97s, while Bf 108s, Kl 36s and PZL.26s proved average, and Italian machines closed a list with 559-801 points.

The second part of the Challenge was a 9537.4 km rally over Europe and northern Africa, on a path: Warsaw - Königsberg - Berlin - Köln - Brussels - Paris - Bordeaux - Pau - Madrid - Seville - Casablanca - Meknes - Sidi Bel Abbes - Algiers (stage waypoint) - Biskra - Tunis - Palermo - Naples - Rome - Rimini - Zagreb - Vienna - Brno - Prague - Katowice - Lwów - Wilno - Warsaw. There were also 8 checkpoints, among others, in Tanger, Messina and Castelfranco Veneto. The route was far longer and more difficult, than in previous contests. Awarded were, first of all, a cruise speed on a whole track, then a regularity of flight. Three nights apart from appointed airfields or a cruise speed below 130 km/h caused disqualification.

The rally started on September 7, in rain, between 5 and 5.30 am. The Bf 108s could take advantage of their speed and were first to reach Berlin. That day 24 fastest crews reached Paris, flying 1752.4 km (10 Poles, 8 Germans, 3 Czechs and 3 Italians). The German Wolfgang Stein (Kl 36) and the Italian team's captain Ambrogio Colombo (Ba-42) had to land and quit due to engine faults. Several crews had similar problems, but managed to repair them.

On the next day, many crews, who started early, especially flying Bf 108s, had problems with locating an airfield in Bordeaux due to heavy fog and had forced landings, lowering their cruise speed (on that occasion, Theo Osterkamp and Gerhard Hubrich had problems with the local police). One Klemm Kl 36 was damaged during a forced landing and had to withdraw (Ernst Krüger). Most - 14 crews reached Seville that day, 9 stayed in Madrid, while last two crews remained in Bordeaux, including Stanisław Płonczyński (RWD-9). Two Poles (Andrzej Włodarkiewicz and Szczepan Grzeszczyk on PZL.26s) reached as far, as Casablanca (3715.2 km).

On September 9 all crews, that remained in the rally, reached Africa, with Andrzej Włodarkiewicz and three Bf 108s being in the lead. 18 crews reached Algiers that day (9 Poles, 6 Germans and 3 Czechs), flying 4774 km in total. Last two crews reached Meknes, including Stanisław Płonczyński. Several crews withdrew that day: Fritz Morzik (the winner of 1929 and 1930 Challenges, flying Kl 36) had three forced landings before Algiers due to a fuel pump fault, also Szczepan Grzeszczyk's PZL.26's engine failed and he had a forced landing before Sidi Bel Abbes. Other German Kraft Eberhard (Kl 36) withdrew in Spain due to wing damage, the Pole Tadeusz Karpiński (RWD-9) quit in Seville because of low cruise speed, and one Italian quit because of illness (Pierro de Angeli). On September 10 the rest reached Algiers, and thus 24 crews completed the first part of the rally. The Pole Stefan Florjanowicz (RWD-9) had to withdraw there due to engine fault.

The contestants left Algiers on September 11, after a rest, and 23 crews reached Tunis that day. On September 12, the crews left for Palermo, over the Mediterranean Sea. The flight was secured by the Italian Navy and the French floatplanes. 22 crews reached Rome that day, one Italian pilot withdrew due to engine damage.

On September 13 the weather was bad, but all but two crews reached Prague (7924 km). The fastest that day was Theo Osterkamp (Bf 108), but other two Bf 108 pilots had forced landings near Trieste due to weather and spent night at Zagreb, what lowered their cruise speed.

On September 14, sixteen crews finished in Warsaw, greeted by crowds, the first was the Pole Ignacy Giedgowd (PZL-26). Among them were five Poles, six Germans, three Czechs and two Italians. That day, the fastest Polish pilot Andrzej Włodarkiewicz (PZL-26) had to land near Tarnów before Lwów and withdrew due to engine fault, also Walter MacPherson (Puss Moth) dropped out for the same reason before Lwów.

On September 15 last three crews reached Warsaw (Werner Junck and Karl Francke flying Bf 108s and Piotr Dudziński flying PZL.26). The last to drop out was Jan Balcer (PZL.26) due to a compressor damage, before Wilno. Fritz Morzik (Kl 36), Tadeusz Karpiński (RWD-9) and Andrzej Włodarkiewicz (PZL.26) finished that day in Warsaw, after repairing their aircraft, flying off the contest.

Only 19 crews out of 32 completed the rally. The only team to finish in complete was the Czechoslovak one; apart from their A.200s, all Fieseler Fi 97s completed the contest. In spite of highest maximum cruise speeds, a result of fastest Bf 108s was hampered by low cruise speeds in other stages of the rally. Best results were obtained by pilots, who managed to maintain a good cruise speed during the whole rally. All participants, who completed the rally, scored maximal amount of 160 points for regularity, spending nights on appointed airfields only.

The last part of the Challenge was a maximum speed trial, on a 297 km triangular course. The trial was carried out on Sunday, September 16, from 4 pm, at the Mokotowskie airfield in Warsaw.

Due to a handicapping system, contestants took off in order of general classification, with proper intervals, and an amount of points given in the speed trial meant, that the first on the finishing line would be the winner of the contest. Each km/h above 210 km/h was awarded with one point.

The fastest were three German Bf 108s, with Theo Osterkamp at the lead (291 km/h). Next three places were taken by the Polish RWD-9s: Stanisław Płonczyński, Jan Buczyński, Jerzy Bajan and Henryk Skrzypiński, the later ex eaquo with Hans Seidemann (Fi 97). The Pole Ignacy Giedgowd (PZL.26) and the Italian Ernesto Sanzin (Ba-39S) had to land due to engine faults and scored 0 points. 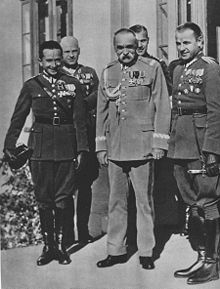 A closing ceremony was held soon after the maximum speed test on September 16. The winners were the Polish crew of pilot Jerzy Bajan and mechanic Gustaw Pokrzywka. Their success was not only a result of their aviation skills, but also of the technical features of their Polish-designed RWD-9. Due to their victory, Poland had a right to organize the next Challenge in 1936, but it decided not to, because of financial reasons. The FAI proposed that other countries organize the contest, but Germany, Italy and France declined. The 1934 Challenge remained the last Challenge and the Polish Aero Club was given a right to retain a transitory cup.