Downtown Detroit is the city's central business district and a residential area, bordered by the Lodge Freeway to the west, the Fisher Freeway to the north, Interstate 375 (Chrysler Freeway) to the east, and the Detroit River to the south. The area contains most of the prominent skyscrapers in Detroit, including the Renaissance Center, the Penobscot Building, and the Guardian Building. The downtown area features high-rise residential living along with a number of parks including those linked by a promenade along the Detroit International Riverfront.[2] In 2007, downtown Detroit was named among the best big city neighborhoods in which to retire by CNN Money Magazine editors.[3]

The Elwood Bar and Grill is listed on the National Register of Historic Places and is within the Grand Circus Park Historic District.

Foxtown is a name used in Detroit for the Grand Circus Park Historic District, with Kales Building, Grand Park Centre, The Fillmore Detroit, Comerica Park, and Ford Field located in it. It is named after the Fox Theatre, a National Historic Landmark. Interstate 75, Grand River Avenue, Woodward Avenue, Interstate 375, Michigan Avenue/US 12, and Gratiot Avenue all pass through or close to Foxtown.[4] The Detroit People Mover has a station in Foxtown on the south end of Grand Circus Park.[2]

The Detroit Opera House is located at Broadway and Grand Circus. The east necklace of downtown links Grand Circus and the stadium area to Greektown along Broadway. The east neckace contains a sub-district sometimes called the Harmonie Park District, which has taken on the renowned legacy of Detroit's music from 1930s through the 1950s to the present.[5] Near the Opera House, and emanating from Grand Circus along the east necklace are other venues including the Music Hall Center for the Performing Arts and the Gem Theatre and Century Club. The historic Harmonie Club and Harmonie Centre are located along Broadway. The Harmonie Park area ends near Gratiot and Randolph. The Detroit Athletic Club stands in view of center field at Comerica Park. Part of the east necklace, the area contains architecturally notable buildings planned for renovation as high-rise residential condominiums such as the Gothic Revival Metropolitan Building at 33 John R St. The Hilton Garden Inn is also in the Harmonie Park area. The east necklace area is serviced by the People Mover at Cadillac station and Broadway station.

Greektown is located less than half a mile (800 m) from the Renaissance Center in the downtown area. The neighborhood is a popular restaurant and entertainment district, having many restaurants that serve Greek cuisine, as well as one of the city's three casinos, Greektown Casino. Certain buildings on Monroe Street are themed to resemble the Parthenon, Pegasus, and other forms of Greek architecture. Greek music is also played on Monroe Street throughout the day. Well-known restaurants include The Laikon Cafe, Cyprus Taverna, Pegasus Taverna, and Pizza Papalis. St. Mary Roman Catholic Church, founded by German immigrants, is located in the heart of the district. The Second Baptist Church once served as "station" for the Underground Railroad. The Detroit People Mover has a station at the Greektown Casino on Beaubien Street between Monroe Street and Lafayette Boulevard.[2] 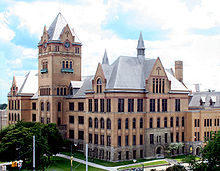 Midtown Detroit is an area covering roughly two square miles between Downtown Detroit to the south and New Center to the north. Its boundaries are the Ford, Chrysler, Fisher, and Lodge Freeways. It includes the Art Center and the Medical Center in the northeast quadrant, Wayne State University's campus, the Detroit Public Library, and the Detroit Historical Museum in the northwest, and the Cultural Center including various restaurants, galleries, newly constructed lofts/condos and nightlife venues along Woodward in the center, among other things.[6][7]

Detroit's Cultural Center is located in the Midtown neighborhood, about two miles (3 km) north of downtown, centered on the Cultural Center Historic District, which is listed in the National Register of Historic Places. The Cultural Center is roughly bounded by Cass Avenue to the west, Interstate 75 to the east, Interstate 94 to the north and Warren Avenue to the south. It also includes the East Ferry Avenue Historic District.[2] Attractions include the Detroit Institute of Arts, the Charles H. Wright Museum of African American History, the Scarab Club, the Detroit Historical Museum, the Museum of Contemporary Art Detroit, the main library of the Detroit Public Library system and the Detroit Science Center. The College for Creative Studies is located adjacent the Scarab Club and opposite the East face of the Detroit Institute of Arts. The main campus of Wayne State University is located adjacent to the area, on the opposite side of Woodward.[2] 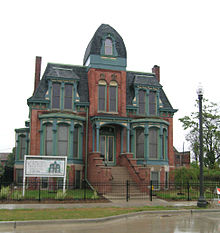 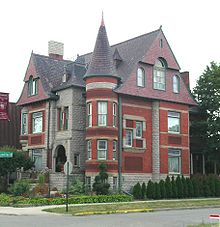 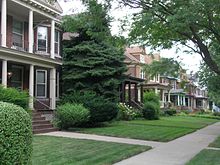 Homes on Avery in Woodbridge. 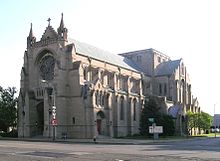 The New Center area is a mixed use commercial and residential district adjacent to Midtown and located approximately three miles (5 km) north of the city's downtown, and one mile (1.6 km) north of the Cultural Center Historic District, around the intersection of Woodward Avenue and Grand Boulevard (which is sometimes referred to as The Boulevard).[2] Developed in the 1920s, it was designed to create a business hub that would offer convenient access to both downtown resources and outlying areas. Some historians believe that the New Center may be the original edge city - a sub-center remote from but related to an urban core. From 1923 to 1996, General Motors maintained its world headquarters in the New Center (in what is now Cadillac Place) before relocating downtown to the Renaissance Center. Cadillac Place, a National Historic Landmark is now occupied by State of Michigan government offices. The Detroit St. Regis Hotel is across from Cadillac Place. The descriptor "New Center" derived its name from the New Center News, an automotive-focused free newspaper begun in 1933 that continues to operate under the name Detroit Auto Scene. The CityFest, a five-day street festival held around Independence Day, takes place on the streets of New Center. The Fisher Building, a National Historic Landmark, is considered an Art Deco masterpiece, sits in the New Center.[2] 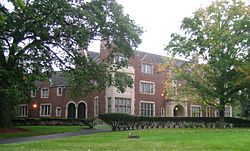 The area includes the Detroit Golf Club and neighborhoods which surround the main campus of the University of Detroit Mercy.[1] Pilgrim Village, developed in the 1920s, is nearby and bounded by Livernois, Idaho, Puritan and Fenkell. It is the birthplace of the Honey Baked Ham Company, which started on Fenkell in 1957.[2]

Palmer Park Apartment Building Historic District, along with the nearby Palmer Woods Historic District, was largely constructed before World War II. Adjacent to the neighborhood is a 140 acre (0.6 km²) park named Palmer Park. The neighborhood and the park were the property of Thomas Witherell Palmer. The neighborhood consists of stately apartment buildings as well as some single-family detached homes. Palmer Park, along with the nearby cities of Ferndale and Royal Oak, are among the gay populated areas with several gay-oriented businesses. The 1990s saw an increase in African-American residents to the area. The 2000s have brought increased investment to the neighborhood with older homes and apartment buildings being restored.[2]

Palmer Woods Historic District is known for its elm-lined streets, large brick homes, and Tudor style architecture. Palmer Woods is located on the west side of Detroit. It is bordered by 7 Mile Road, 8 Mile Road, Woodward Avenue, and the Sherwood Forest neighborhood. The area was developed from farmland in the 1920s as an exclusive enclave for the business class. Lots are large, with ample room for trees, play equipment, and a good expanse of grass. It is still the home of physicians, politicians, business owners, artists, executives and their families.[2]

Detroit Public Library operates the Bowen Branch Library at 3648 West Vernor Highway. On December 28, 1912 the branch opened in its current location.[22] The area includes the historic Michigan Central Station and the Ambassador Bridge.