Hayim Nahman Bialik (Hebrew: חיים נחמן ביאליק‎; January 9, 1873 – July 4, 1934), also Chaim or Haim, was a Jewish poet who wrote in Hebrew. Bialik was one of the pioneers of modern Hebrew poets and came to be recognized as Israel's national poet.

Bialik was born in Radi, Volhynia in Russian Empire to Yitzhak Yosef Bialik, a scholar and businessman, and his wife Dinah (Priveh). Bialik's father died in 1880, when Bialik was 7 years old. In his poems, Bialik romanticized the misery of his childhood, describing seven orphans left behind—though modern biographers believe there were fewer children, including grown step-siblings who did not need to be supported. Be that as it may, from the age 7 onwards Bialik was raised in Zhitomir by his stern Orthodox grandfather, Yaakov Moshe Bialik.

In Zhitomir he received a traditional Jewish religious education, but also explored European literature. At the age of 15, inspired by an article he read, he convinced his grandfather to send him to the Volozhin Yeshiva in Lithuania, to study at a famous Talmudic academy under Rabbi Naftali Zvi Yehuda Berlin, where he hoped he could continue his Jewish schooling while expanding his education to European literature as well. Attracted to the Jewish Enlightenment movement (haskala), Bialik gradually drifted away from yeshiva life. Poems such as HaMatmid ("The Talmud student") written in 1898, reflect his great ambivalence toward that way of life: on the one hand admiration for the dedication and devotion of the yeshiva students to their studies, on the other hand a disdain for the narrowness of their world.

At 18 he left for Odessa, the center of modern Jewish culture in the southern Russian Empire, drawn by such luminaries as Mendele Mocher Sforim and Ahad Ha'am. In Odessa, Bialik studied Russian and German language and literature, and dreamed to enroll in the Modern Orthodox Rabbinical Seminary in Berlin. Alone and penniless, he made his living teaching Hebrew. The 1892 publication of his first poem, El Hatzipor "To the Bird," which expresses a longing for Zion, in a booklet edited by Yehoshua Hone Ravnitzky (a future collaborator), eased Bialik's way into Jewish literary circles in Odessa. He joined the so-called Hovevei Zion group and befriended Ahad Ha'am, who had a great influence on his Zionist outlook.

In 1892 Bialik heard news that the Volozhin yeshiva had closed, and rushed home to Zhitomir, to prevent his grandfather from discovering that he had discontinued his religious education. He arrived to discover his grandfather and his older brother both on their deathbeds. Following their deaths, Bialik married Mania Averbuch in 1893. For a time he served as a bookkeeper in his father-in-law's lumber business in Korostyshiv, near Kiev. But when this proved unsuccessful, he moved in 1897 to Sosnowiec (then in Russia) a small town near the border to Prussia and to Austria. In Sosnowiec, Bialik worked as a Hebrew teacher, and tried to earn extra income as a coal merchant, but the provincial life depressed him. He was finally able to return to Odessa in 1900, having secured a teaching job. 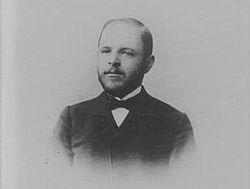 For the next two decades, Bialik taught and continued his activities in Zionist and literary circles, as his literary fame continued to rise. This is considered Bialik's "golden period". In 1901 his first collection of poetry was published in Warsaw, and was greeted with much critical acclaim, to the point that he was hailed "the poet of national renaissance." Bialik relocated to Warsaw briefly in 1904 as literary editor of the weekly magazine HaShiloah founded by Ahad Ha'am, a position he served for six years.

In 1903 Bialik was sent by the Jewish Historical Commission in Odessa to interview survivors of the Kishinev pogroms and prepare a report. In response to his findings Bialik wrote his epic poem In the City of Slaughter, a powerful statement of anguish at the situation of the Jews. Bialik's condemnation of passivity against anti-Semitic violence is said to have influenced the founding Jewish self-defense groups in Russia, and eventually the Haganah in Palestine. Bialik visited Palestine in 1909.

Throughout the years 1899-1915 Bialik published about 20 of his Yiddish poems in different Yiddish periodicals in Russia. These poems are often considered to be among the best achievements of modern Yiddish poetry of that period. In collaboration with Ravnitzky, Bialik published Sefer HaAggadah (1908–1911, The Book of Legends), a three-volume edition of the folk tales and proverbs scattered through the Talmud. For the book they selected hundreds of texts and arranged them thematically. The Book of Legends was immediately recognized as a masterwork and has been reprinted numerous times. Bialik also edited the poems of the medieval poet and philosopher Ibn Gabirol. He began a modern commentary on the Mishnah, but only completed Zeraim, the first of the six Orders (in the 1950s, the Bialik Institute published a commentary on the entire Mishnah by Hanoch Albeck, which is currently out of print). He additionally added several commentaries on the Talmud.

Bialik lived in Odessa until 1921, when Moriah publishing house was closed by Communist authorities, as a result of mounting paranoia following the Bolshevik Revolution. With the intervention of Maxim Gorki, a group of Hebrew writers were given permission by the Soviet government to leave the country. While in Odessa he had befriended the soprano Isa Kremer whom he had a profound influence on. It was through his influence that she became an exponent of Yiddish music on the concert stage; notably becoming the first woman to concertize that music.

Bialik then moved - via Poland and Turkey - to Berlin, where together with his friends Ravnitzky and Shmaryahu Levin he founded the Dvir publishing house. Bialik published in Dvir the first Hebrew language scientific journal with teachers of the rabbinical college Hochschule für die Wissenschaft des Judentums contributing. In Berlin Bialik joined a community of Jewish authors and publishers such as Samuel Joseph Agnon (sponsored by the owner of Schocken Department Stores, Salman Schocken, who later founded Schocken Verlag), Simon Dubnow, Israel Isidor Elyashev (Ba'al-Machshoves), Uri Zvi Greenberg, Jakob Klatzkin (founded Eschkol publishing house in Berlin), Moshe Kulbak, Jakob-Wolf Latzki-Bertoldi (founded Klal publishing house in Berlin in 1921), Simon Rawidowicz (co-founder of Klal), Salman Schneur, Nochum Shtif (Ba'al-Dimion), Shaul Tchernichovsky, elsewhere in Germany Shoshana Persitz with Omanuth publishing house in Bad Homburg v.d.H. and Martin Buber. They met in the Hebrew Club Beith haWa'ad ha'Ivri בית הועד העברי (in Berlin's Scheunenviertel) or in Café Monopol, which had a Hebrew speaking corner, as Eliezer Ben-Yehuda's son Itamar Ben-Avi recalled, and in Café des Westens (both in Berlin's more elegant western boroughs). The then still Soviet theatre HaBimah toured through Germany, renowned by Albert Einstein, Alfred Kerr and Max Reinhardt. Bialik succeeded Saul Israel Hurwitz after his death (8 August 1922) as Hebrew chief editor at Klal publishing house, which published 80 titles in 1922.[1] On January 1923 Bialik's 50th birthday was celebrated in the old concert hall of the Berlin Philharmonic bringing together everybody who was anybody.[2] In the years of Inflation Berlin had become a centre of Yiddish and Hebrew and other foreign language publishing and printing, because books could be produced at ever falling real expenses and sold to a great extent for stable foreign currency. Many Hebrew and Yiddish titles were also translated into German. Once the old inflationary currency (Mark) was replaced by the new stable Rentenmark and Reichsmark this period ended and many publishing houses closed or relocated elsewhere, as did many prominent publishers and authors. 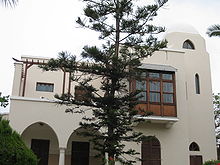 In 1924 Bialik relocated with his publishing house Dvir to Tel Aviv, devoting himself to cultural activities and public affairs. Bialik was immediately recognized as a celebrated literary figure. He delivered the address that marked the opening (in 1925) of the Hebrew University in Jerusalem and was a member of its board of governors. In 1927 he became head of the Hebrew Writers Union, a position he retained for the remainder of his life. In 1933 his 60th birthday was celebrated with festivities nationwide, and all the schoolchildren of Tel Aviv were taken to meet him and pay their respects to him.

Bialik wrote several different modes of poetry. He is perhaps most famous for his long, nationalistic poems, which call for a reawakening of the Jewish people. However no less effective are his passionate love poems, his personal verse or his nature poems. Last but not least, Bialik's songs for children are a staple of Israeli nursery life. From 1908 onwards, he wrote mostly prose.

By writing his works in Hebrew, Bialik contributed significantly to the revival of the Hebrew language, which before his days existed primarily as an ancient, scholarly tongue. His influence is felt deeply in all modern Hebrew literature. The generation of Hebrew language poets who followed in Bialik's footsteps, including Jacob Steinberg and Jacob Fichman, are called "the Bialik generation".

To this day, Bialik is recognized as Israel's national poet. Bialik House, his former home at 22 Bialik Street in Tel Aviv, has been converted into a museum, and functions as a center for literary events. The municipality of Tel Aviv awards the Bialik Prize in his honor. Kiryat Bialik, a suburb of Haifa, and Givat Hen, a moshav bordering the city of Raanana, are named after him. He is the only person to have two streets named after him in the same Israeli city - Bialik Street and Hen Boulevard in Tel Aviv. There is also a High School in Montreal, Quebec named Bialik High School,and a cross communal Jewish Zionist school in Melbourne called Bialik College, both named after him.

Bialik's poems have been translated into at least 30 languages, and set to music as popular songs. These poems, and the songs based on them, have become an essential part of the education and culture of modern Israel.

Bialik wrote most of his poems using "Ashkenazi" pronunciation, while modern Israeli Hebrew uses the Sephardi pronunciation. Consequently, Bialik's poems are rarely recited in the meter in which they were written.

Bialik died in Vienna, Austria, on July 4, 1934, following a failed prostate operation. He was buried in Tel Aviv: a large mourning procession followed from his home on the street named after him, to his final resting place.