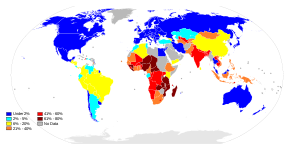 The poverty threshold, or poverty line, is the minimum level of income deemed necessary to achieve an adequate standard of living in a given country.[1] In practice, like the definition of poverty, the official or common understanding of the poverty line is significantly higher in developed countries than in developing countries.[2][3]

Determining the poverty line is usually done by finding the total cost of all the essential resources that an average human adult consumes in one year.[6] This approach is needs-based in that an assessment is made of the minimum expenditure needed to maintain a tolerable life. This was the original basis of the poverty line in the United States, whose calculation was simplified to be based solely on the cost of food and is updated each year.[citation needed] The largest of these expenses is typically the rent required to live in an apartment, so historically, economists have paid particular attention to the real estate market and housing prices as a strong poverty line affector.

Individual factors are often used to account for various circumstances, such as whether one is a parent, elderly, a child, married, etc. The poverty threshold may be adjusted each year.

The poverty threshold is useful as an economic tool with which to measure such people and consider socioeconomic reforms such as welfare and unemployment insurance[citation needed] to reduce poverty.

A measure of absolute poverty quantifies the number of people below a fixed real poverty threshold.[citation needed] It is a level of poverty as defined in terms of the minimal requirements necessary to afford minimal standards of food, clothing, health care and shelter.[7] (See definition from Glossary of Sociology.) For the measure to be absolute, the line must be the same in different countries, cultures, and technological levels. Such an absolute measure should look only at the individual's power to consume and it should be independent of any changes in income distribution. Such a measure is possible only when all consumed goods and services are counted and when PPP-exchange rates are used (see purchasing power parity).[citation needed] The intuition behind an absolute measure is that mere survival takes essentially the same amount of resources across the world and that everybody should be subject to the same standards if meaningful comparisons of policies and progress are to be made. Notice that if everyone's real income in an economy increases, and the income distribution does not change, absolute poverty will decline.

Measuring poverty by an absolute threshold has the advantage of applying the same standard across different locations and time periods, making comparisons easier. On the other hand, it suffers from the disadvantage that any absolute poverty threshold is to some extent arbitrary; the amount of wealth required for survival is not the same in all places and time periods. For example, a person living in far northern Scandinavia requires a source of heat during colder months, while a person living on a tropical island does not.

According to a UN declaration that resulted from the World Summit on Social Development in Copenhagen in 1995, absolute poverty is "a condition characterised by severe deprivation of basic human needs, including food, safe drinking water, sanitation facilities, health, shelter, education and information. It depends not only on income but also on access to services."[8]

David Gordon's paper, "Indicators of Poverty & Hunger", for the United Nations, further defines absolute poverty as the absence of any two of the following eight basic needs:[8]

A measure of relative poverty defines "poverty" as being below some relative poverty threshold. For example, the statement that "households with an accumulated income less than 60% of the median equivalized household disposable income are living in poverty" uses a relative measure to define poverty. In this system, if everyone's real income in an economy increases, but the income distribution stays the same, then the rate of relative poverty will also stay the same.

Relative poverty measurements can sometimes produce odd results, especially in small populations. For example, if the median household in a wealthy neighborhood earns US$1 million each year, then a family that earns US$100,000 would be considered poor on the relative poverty scale, even though such a family could meet all of its basic needs and much more. At the other end of the scale, if the median household in a very poor neighborhood earned only 50% of what it needs to buy food, then a person who earned the median income would not be considered poor on a relative poverty scale, even though the person is clearly poor on an absolute poverty scale.

The term relative poverty can also be used in a different sense to mean "moderate poverty" –- for example, a standard of living or level of income that is high enough to satisfy basic needs (like water, food, clothing, shelter, and basic health care), but still significantly lower than that of the majority of the population under consideration.[citation needed]

Some measurements combine certain aspects of absolute and relative measures. For example, the Fraser Institute publishes a basic needs poverty measure for Canada. According to the Fraser Institute, "the basic-needs approach is partly absolute (the list [of necessities] is limited to items required for long-term physical well-being) and partly relative, reflecting the standards that apply in the individual's own society at the present time."[9] The Fraser Institute's list of necessities for living creditably in Canada includes not only food, shelter, clothing, and health care, but also personal care, furniture, transportation, communication, laundry, and home insurance. It is criticized for not including any entertainment items like cable television, daily newspapers, and tickets to movies or sporting events.[9][10]

CIA World Factbook based map showing the percentage of population by country living below that country's official poverty line.

National estimates are based on population-weighted subgroup estimates from household surveys. Definitions of the poverty line may vary considerably among nations. For example, rich nations generally employ more generous standards of poverty than poor nations. Thus, the numbers are not comparable among countries.

India's official poverty level, on the other hand, is split according to rural vs. urban thresholds. For urban dwellers, the poverty line is defined as living on less than 538.60 rupees (approximately USD $12) per month, whereas for rural dwellers, it is defined as living on less than 356.35 rupees per month (approximately USD $7.50).[15] By this measure, only 27.5% of Indians live in poverty,[citation needed] whereas by the World Bank standard of $1.25 per day, 42% of Indians live in poverty[citation needed] – this is the third highest rate in South Asia after Bangladesh and Bhutan.

In the year 2011 there was a crossfire between National Advisory Council of India (NAC) & Planning Commission of India. The row was sparked when Planning Commission informed the Supreme Court that for an average Indian urban dweller, Rs.32 per day is adequate to carry out his/her living and that those who earn more than Rs.32 ($ 2 in terms of PPP) in Urban areas & Rs.25 ($ 1.56 in terms of PPP) in Rural areas shall not be considered as poor anymore. Former NAC member Jean Dreze said the health expenditure estimated by the Tendulkar panel was “barely enough to buy an aspirin”. Food rights activist Colin Gonsalves described the definition as “shocking”. The per capita expenditure of Rs 32 per day in cities won’t be sufficient even for food. He also quoted saying that “A person cannot feed himself properly with this money. Where from he will spend on clothing, health and other things?”.

A poverty threshold relies on a quantitative, or purely numbers-based, measure of income. If other human development-indicators like health and education are used, they must be quantified, which is not a simple (if even achievable) task.

In-kind gifts, whether from public or private sources, are not counted when calculating a poverty threshold. For example, if a parent pays the rent on an apartment for an adult son directly to the apartment owner, instead of giving the money to the son to pay the rent, then that money does not count as income to the son. If a church or non-profit organization gives food to an elderly person, the value of the food is not counted as income to the elderly person. Rea Hederman, a senior policy analyst in the Center for Data Analysis at the Heritage Foundation, said

The official poverty measure counts only monetary income. It considers antipoverty programs such as food stamps, housing assistance, the Earned Income Tax Credit, Medicaid and school lunches, among others, "in-kind benefits" – and hence not income. So, despite everything these programs do to relieve poverty, they aren't counted as income when Washington measures the poverty rate.[16]

Studies measuring the difference between income before and after taxes and government transfers, however, have found that without these programs poverty would be roughly 30% to 40% higher than the official poverty line indicates, despite many of their benefits not being counted as income.[17][18]