The Coup d'état of Yanaon (Hindi: Yanam Rājyaghātuka Charya) was an incident which brought interest for both India and France when both governments were in an ongoing negotiations in Delhi and Paris regarding the future of French settlements in India in 1954. 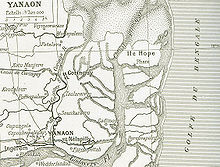 The immediate cause is said to be the decision of Consul General Sri Kewal Singh on the night of 11 April 1954 at the conference at Kandamangalam[citation needed]. Since Yanam was small in area and population, he requested Dadala for a plan for its liberation which ultimately resulted in the coup d'état de Yanaon.

On 10 December 1953, Consul General R.K. Tandon was transferred and Kewal Singh took his place. He stood behind Sellane Naicker and Dadala. He was able to detach the pro-French leaders and members of the assembly (Assemblée représentative) from the French camp and took them to New Delhi.

The unification movement gathered momentum under V. Subbiah, when the pro-French leader Edouard Goubert switched his loyalty to the pro-merger camp. A momentous event in the freedom movement of Pondichéry occurred on 18 March 1954, when the members of the executive council and mayor of Pondichéry and seven adjoining communes proclaimed their decision to merge with the Indian Union without a referendum. All the communes in Karikal also followed suit. This decision was to be confirmed by the Representative Assembly.

When the French India Socialist Party was preparing to move the merger resolution, the French Governor scuttled it by postponing the session. Provoked by this, the Socialists planned to capture the outlying communes one by one and move to Pondichéry. The Communist Party was also ready to launch a campaign of direct action to merge Pondichéry with India. Accordingly, the leaders of the French India Socialist Party hoisted the Indian National Flag atop the Nettapakkam police station on the last day of March in 1954. Thus, a Provisional Government with Edouard Goubert as the head, was formed in the enclave of Nettapacom. The Indian Armed Reserve was posted round its borders.

In the meanwhile, negotiations were going on between the French Government and Indian Government governments in Delhi and Paris. Sri Kewal Singh met all the leaders of the Provisional Government at a conference in Kandamangalam in the night of 11 April 1954. He explained that the French authorities were making fun of the petty Provisional government of Nettapacom. He suggested that if the leaders wanted real liberation of all settlements, they should occupy any of the big four settlements. While dropping Dadala at his home from the meeting, Sri Kewal Singh asked Dadala what he thought of the plan and if he had any ideas. Subsequently, a plan was formed for Dadala to try to liberate Yanam.

On 13 April 1954, Dadala arrived in Yanam for working out a possibility of its liberation from the French. On arrival he realised that Yanam was very much dominated by the pro-French atmosphere and hence, there was no living nationalism signs. On 14 April 1954, he proceeded to Kakinada, a border town to Yanam which was coming under East Godavari District of Andhra Pradesh State in India. There he met all the district leaders and officials for help and aid. However, he didn’t find any encouraging response from them. Likewise, in Yanam, his handful of friends and relatives warned him that he would be captured and killed if he ventured to start a nationalist agitation there. Everybody in Yanam seemed to have stood four square behind the French administration. Next day when Dadala stepped in to meet some of his followers in Farampeta village, he was ambushed by the French Police. He pulled out his revolver, fired in the air and escaped over a nearby flood bank. From there he hastily retreated to the Indian territory.

Returning to Kakinada, he purchased a large number of Congress flags and started a house-to-house campaign, requesting students and their leaders to organise a meeting in the town hall grounds. Along with his new nationalistic recruits, he hired lorries with congress flags and people, made tours in the streets of Yanam, inviting them to the meetings. Once the meetings were organised, he urged the people to help him in his struggle for liberation of Yanam.

Then the French police raided some of the villages on Indian territory. Dadala sent a telegram to Kewal Singh complaining about the high handedness of the French police. He installed loudspeakers around Yanam town, played patriotic songs and explained to people the reasons for merger with India. Inside Yanam, the pro-French leaders (Samatam Krouschnaya and Kamichetty Sri Parasurama Varaprasada Rao Naidu) organised daily meetings and processions against the merger and normally ended them with effigies being burnt.

At the beginning of June, the Secretary General of the French administration of Pondicherry met Dadala and informed him that the government was transferring the two European officials who were residing in Yanam. He requested safety of these officials from the nationalist volunteers while leaving the place. Dadala followed the two officials till Kakinada from where they departed by train (Circar Express) to Pondicherry.

Preparation for the Coup

Now with all white French leaders in fear of any mob fury, the merger leaders decided it was the right time to strike. Dadala made arrangements to take the administration of Yanam after consultation with the officials of Kakinada and other local Yanam leaders Madimchetty Satianandam (Mayor of Yanam), Yerra Jagannatha Rao, Kamichetty Sri Parasurama Varaprasada Rao Naidu and Kanakala Tatayya Naidou (Two Members of Representative Assembly from Yanam). Though Kamichetty Parasuram Naidu was a pro-French leader because of his father, The Grand old man of Yanam, Kamichetty Venougopala Rao Naidou, he accepeted to join the pro-merger camp.

During this time, Maddimsetti fled from Yanam, which made his supporters angry and led to pillage of his home. A 78-year-old doctor, Samatam Krouschnaya, became the interim Mayor of Yanam. He was the lone pro-French leader to fight against pro-merger leaders. Samatam was a poet, historian and an Ayurvedic doctor. He wrote many books in Telugu and French.

Since Yanam was extremely predominant with pro-French feelings, it made the interference of Indian military unavoidable.

In the early morning on Sunday, 13 June 1954, Dadala marched at the head of a few thousand volunteers from Kakinada towards the bungalow of the Administrator of Yanam, in order to capture it and hoist the Indian Flag. Bayankar Achary, another Indian revolutionary and patriot was a member of the volunteer corps. Marching 50 yards ahead of his volunteers with a megaphone, he requested the French police and other officials to cooperate and surrender. The French police retaliated and threw grenades, which fell at 20 meters from Dadala and exploded harmlessly. Then they started firing on the volunteers.

The volunteers took shelter behind the Manyam Zamindar’s choultry and fired against the French police who were in the open in front of the police station. About four policemen were wounded, while the remaining policemen stopped firing and ran away to lock themselves inside the police building fearing mob fury. Dadala surrounded them and had them disarmed. The volunteers combed the town and arrested all pro-French leaders and conducted a court martial against them. When they admitted to their guilt, clemency was shown to them. The coup d'état of Yanam was announced by All India Radio and Press.

The Indian National Flag was hoisted on the top of administrator's bungalow. Then pro-merger group formed the Revolutionary Provisional Government of Yanam headed by Dadala and adopted a resolution declaring Yanaon A Libéré (Yanam liberated).

Another significant event that happened that day was the death of Samatam Krouschnaya. During that day, he battled alone against all pro-merger group for French Sovereignty in Yanam. The location of Samatam was communicated to Satianandam by his brother Satianarayana. When Samatam was trying to jump from a wall at Pydikondala house and take shelter, he was shot by Maddimchetty Satianandam who had a pistol given to him by one of his close friends. It was known that Maddimchetty thought that because of Samatam only his house got pillaged. Samatam died there, but even before his death he did not stop shouting Vive la France.

The news of Samatam's death brought tears to many people in Yanam. Had Samatam survived that day, the coup d'état would have been an utter failure. His death is considered by the French a conspiracy by India. For locals of Yanam, it was still a mystery about the real murderer of their beloved leader. There was also a rumour that his body was cut into pieces and was thrown in adjoint Godavari River after the coup.

The coup d'état de Yanaon enraged the French authorities of Pondicherry. Rumours were spread to the effect that the French government was dispatching a cruiser to Yanam to capture Merger Leaders and to re-establish their authority. Just three days before the coup, the last administrator of Yanam, George Sala, was recalled by André Ménard, then Governor General of Pondicherry.

Dadala was also appointed as Acting Commissioner for Yanam for 14 days. Towards the end of June 1954, Sri Kewal Singh paid a visit to Yanam and requested Dadala's return to Pondicherry to continue his activities there. On 3 July, on Kewal Singh's request, Dadala left Yanam, after having made all arrangements for its proper administration.

France declared it was not responsible for the events occurred after 13 June 1954 in the Treaty of Cession signed by French and Indian authorities on 28 May 1956.

Monsieur Dadala was appointed as high ranking officer in the department of the state of Andhra Pradesh until he retired on 29 June 1963, three days before merger of Yanam into the newly formed Union territory of Pondicherry.

The events described above raised some unsolved questions, which lost importance over a matter of time: