William John Arthur Charles James Cavendish-Bentinck, 6th Duke of Portland KG, GCVO, PC, TD, DL (28 December 1857 – 26 April 1943), known as William Cavendish-Bentinck until 1879, was a British landowner, courtier and Conservative politician. He notably served as Master of the Horse between 1886 and 1892 and again between 1895 and 1905.

Portland was the son of Lieutenant-General Arthur Cavendish-Bentinck by his first wife Elizabeth Sophia Hawkins-Whitshed, daughter of Sir St Vincent Hawkins-Whitshed, 2nd Baronet and grand-daughter of Admiral Sir James Hawkins-Whitshed, 1st Baronet. His paternal grandparents were Lord Charles Bentinck and his second wife Lady Anne Wellesley, daughter of Richard Wellesley, 1st Marquess Wellesley. Lord Charles was the third son of Prime Minister William Cavendish-Bentinck, 3rd Duke of Portland by his wife Lady Dorothy Cavendish, daughter of William Cavendish, 4th Duke of Devonshire and Lady Charlotte Boyle. Portland's mother died only a few days after his birth. He was educated at Eton.[1] He inherited the Cavendish-Bentinck estates, based around Welbeck Abbey in Nottinghamshire, from his cousin William Cavendish-Scott-Bentinck, 5th Duke of Portland, in 1879. He also succeeded his stepmother as second Baron Bolsover in 1893. His half-sister Lady Ottoline Morrell was a society hostess and patron of the arts associated with the Bloomsbury Group.

He also served as Lord-Lieutenant of Caithness from 1889 to 1919 and as Lord Lieutenant of Nottinghamshire from 1898 to 1939 and was a Deputy Lieutenant of Ayrshire and a trustee of the British Museum. From 1937 to 1943 he was Chancellor of the Order of the Garter.[1] At the coronation of King George VI Portland carried the crown of Queen Elizabeth, whose mother (the Countess of Strathmore and Kinghorne) was his cousin. It was at his estate in Langwell that the Sunderland Flying boat carrying the Duke of Kent (the King's youngest brother) crashed while in route to a RAF Base in Iceland.

Portland inherited the estate and stud farm near Clumber Park in North Nottinghamshire. Among the horses he owned was St. Simon, who won the 1884 Ascot Gold Cup. He also bred and owned Ayrshire and Donovan, who won the 1888 and 1889 runnings of the Epsom Derby.

Portland died in April 1943, aged 85, and was succeeded by his eldest son, William. The Duchess of Portland died in July 1954, aged 90.[1] The department of Manuscripts and Special Collections, The University of Nottingham holds estate papers of the 6th Duke in the Portland (London) Collection (Pl).[2] 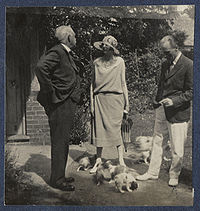 The Duke of Portland to the left with Rosamond Rose and an unknown man.