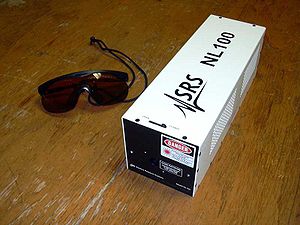 A nitrogen laser is a gas laser operating in the ultraviolet range[1] (typically 337.1 nm) using molecular nitrogen as its gain medium, pumped by an electrical discharge.

The gain medium is nitrogen molecules in the gas phase. The nitrogen laser is a 3-level laser. In contrast to a ruby laser or to other more typical 4-level lasers, the upper laser level of nitrogen is directly pumped, imposing no speed limits on the pump. Pumping is normally provided by direct electron impact; the electrons must have sufficient energy, or they will fail to excite the upper laser level. Typically reported optimum values are in the range of 80 to 100 eV per Torr·cm pressure of nitrogen gas.

There is a 40 ns upper limit of laser lifetime at low pressures and the lifetime becomes shorter as the pressure increases. The lifetime is only 1 to 2 ns at 1 atmosphere. In general

The strongest lines are at 337.1 nm *wavelength in the ultraviolet. Other lines have been reported at 357.6 nm, also ultraviolet. This information refers to the second positive system of molecular nitrogen, which is by far the most common. No vibration of the two nitrogen atoms is involved, because the atom-atom distance does not change with the electronic transition. The rotation needs to change to deliver the angular momentum of the photon, furthermore multiple rotational states are populated at room temperature. There are also lines in the far-red and infrared from the first positive system, and a visible blue laser line from the molecular nitrogen positive (1+) ion.

The metastable lower level lifetime is 40 μs, thus, the laser self-terminates, typically in less than 20 ns. This type of self-termination is sometimes referred to as “bottlenecking in the lower level”. This is only a rule of thumb as is seen in many other lasers: The helium-neon laser also has a bottleneck as one decay step needs the walls of the cavity and this laser typically runs in continuous mode. Several organic dyes with upper level lifetimes of less than 10 ns have been used in continuous mode. The Nd:YAG laser has an upper level lifetime of 230 µs, yet it also supports 100 ps pulses.

Repetition rates can range as high as a few kHz, provided adequate gas flow and cooling of the structure are provided. Cold nitrogen is a better medium than hot nitrogen, and this appears to be part of the reason that the pulse energy and power drop as the repetition rate increases to more than a few pulses per second. There are also, apparently, issues involving ions remaining in the laser channel.

Nitrogen lasers can operate within a resonator cavity, but due to the typical gain of 2 every 20 mm they more often operate on superluminescence alone; though it is common to put a mirror at one end such that the output is emitted from the opposite end.

For a 10 mm wide gain volume diffraction comes into play after 30 m along the gain medium, a length which is unheard of. Thus this laser does not need a concave lens or refocusing lenses and beam quality improves along the gain medium. The height of the pumped volume may be as small as 1 mm, needing a refocusing lens already after 0.3 m. A simple solution is to use rounded electrodes with a large radius, so that a quadratic pump profile is obtained.

Microscopic description of a fast discharge

Spark gaps use a high density of gas molecules and a low density of initial electrons to favor streamers. Electrons are removed by a slowly rising voltage. A high density gas increases the breakdown field, thus shorter arcs can be used with lower inductance and the capacity between the electrodes is increased. A wide streamer has a lower inductance.

Gas lasers use low density of gas molecules and a high density of initial electrons to prevent streamers. Electrons are added by preionisation not removed by oxygen, because nitrogen from bottles is used. Wide avalanches can excite more nitrogen molecules.

Inelastic scattering heats up a molecule, so that in a second scattering the probability of electron emission is increased. This leads to an arc. Typically arcing occurs after lasing in nitrogen. The streamer in the spark gap discharges the electrodes only by means of image charge, thus when the streamer touches both electrodes most of the charge is still available to feed the arc, additional charge is stored on the distribution plates. Thus arcing in the spark gap starts before lasing.

Conditions for pulsed avalanche discharges are described by Levatter and Lin.[2] 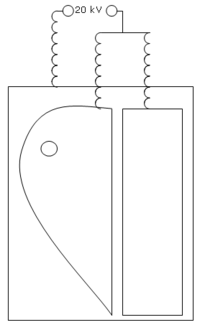 Low inductance implemention top view. Erratum: Caps should be slightly longer than the channel and have rounded corners.

The speed of either circuit is increased in two steps. Firstly, the inductance of all components is reduced by shortening and widening conductors and by squeezing the circuit into a flat rectangle. The total inductance is the sum of the components:

The intense discharge is reported to distort oscilloscopes nearby. This can be reduced by building the laser symmetrically into a grounded cylinder with the spark gap at the bottom, the laser at the top, capacitor 1 left and right, and capacitor 2 left and right stacked onto capacitor 1. This has the further advantage of reducing the inductance. And this has the disadvantage that the laser channel cannot be inspected for sparks anymore.

Secondly, transmission line theory and waveguide theory is applied to achieve a traveling wave excitation. Measured nitrogen laser pulses are so long that the second step is unimportant. From this analysis it follows that:

Paschen's law states that the length of the spark gap is inverse-proportional to the pressure. For a fixed length to diameter ratio of the spark, the inductance is proportional to the length (source [1], compare with: dipole antenna ). Thus the electrodes of the spark gap are glued or welded on a dielectric spacer-ring. To reduce the danger due to the pressure, the volume is minimized. To prevent sparks outside space ring in the low pressure the spacer usually gets thicker outwards in an s-shaped manner.

Connection between spark gap and laser channel based on traveling wave theory:

The breakdown voltage is low for helium, medium for nitrogen and high for SF6 ([2]), though nothing is said about the spark thickness variations.

8E10A/s are possible with a spark gap ([3]) this nicely matches the typical rise times of 1E-8s and typical currents of 1E3A occurring in nitrogen lasers.

A cascade of spark gaps allows to use a weak trigger pulse to initiate a streamer in the smaller gap, wait for its transition into in arc, and then for this arc to extend into the larger gap ([4]). Still the first spark gap in the cascade needs a free electron to start with, so jitter is rather high.

Avalanches homogenize a discharge fast mostly along the field lines. With a short duration (<10 ms) since the last laser pulse enough ions are left over so that all avalanches overlap also laterally. With low pressure (<100 kPa) the max charge carrier density is low and the electromagnetic driven transition from avalanche to spark is inhibited.

In other cases UV radiation homogenizes a discharge slowly perpendicular to a discharge. These are brought into balance by placing two linear discharges next to each other 1 cm apart. The first discharge is across a smaller gap and starts early. Due to the low number of initial electrons streamers typically 1 mm apart are seen. The electrodes for the first discharge are covered by a dielectric, which limits this discharge. Therefore the voltage is able to rise further until avalanches can start in the second gap. These are so many that they overlap and excite every molecule.

With about 11 ns the UV generation, ionisation, and electron capture are in a similar speed regime as the nitrogen laser pulse duration and thus as fast electric must be applied.

The gas pressure in a nitrogen laser ranges from a few mbar to as much as several bar. Furthermore, air provides significantly less output energy than pure nitrogen or a mixture of nitrogen and helium. The pulse energy ranges from µJ to mJ (a commercial version using a spark gap delivers 300 microJ) and a peak power in the range of kW to more than 3 MW can be achieved. The pulse temporal width is between a few hundred picoseconds (typically at 1 atmosphere partial pressure of nitrogen) and a maximum of approximately 30 nanoseconds at reduced pressure (typically some dozens of Torr), though fwhm pulsewidths of 6 to 8 ns are typical.

The transverse discharge nitrogen laser has long been a popular choice for amateur home construction, owing to its simple construction and simple gas handling. It was described by Scientific American in 1974, as one of the first laser home-construction articles.[3]