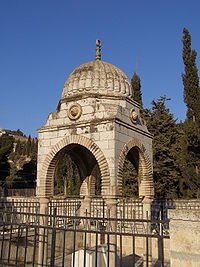 Grave of Mujir al-Din, at the base of the Mount of Olives, Jerusalem.

Commonly known simply as Mujir al-Din or the son of Quttainah,he was born 'Abd al-Rahman ibn Muhammad al-'Ulaymi (Arabic: مجير الدين عبدالرحمن الحنبلي العليمي الشهير بأبن قطينه ‎) during the period of Mamluk rule over Palestine into a family of notables native to the city of Jerusalem.[3][5] Among his many nisbas is al-Hanbali, referring to the Islamic school of thought to which he adhered. Another is al-'Umari, denoting that his ancenstral lineage traces back to 'Umar ibn al-Khattāb (c. 590-644), the second Rashidun caliph. This nisba and a third, the shuhra ("nickname") of al-'Ulaymi, indicate his association with a prominent 15th century Jerusalemite family of Hanbali scholars and judges, one of whom was the chief Hanbali judge of the city, Shams al-Din al-'Umari al-'Ulaymi.[5]

Mujir al-Din's father, Muhammad ibn 'Adb al-Rahman, was a scholar, and he instructed his son in the religious sciences. His formal education began early, and by the age of six, Mujir al-Din was successfully tested on his knowledge of Arabic grammar by another of his instructors, Taqi al-Din al-Qarqashandi, a Shafi'i sheikh, with whom he also studied the hadiths. At ten years old, he studied Quranic recitation with a Hanafi faqih (one who has received the Islamic equivalent of a Master of Law).[5]

He attended Islamic jurisprudence classes given by Kamal al-Din al-Maqdisi, a prominent Shafi'i scholar and qadi, at al-Madrassa al-Salahiyya, the most prestigious college in the city, and at Al-Aqsa Mosque compound.[i] Al-Maqdisi granted Mujir al-Din an ijaza when he was thirteen years old. In his youth in Jerusalem, he also studied hadith with two other Hanafi scholars (ibn Qamuwwa, a faqih, and the sheikh Shams al-Din al-Ghazzi al-Maqdisi), studying grammar and Hanbali fiqh with a Maliki scholar (the chief judge Nur al-Din al-Misri). When he was approximately eighteen years old, he left for Cairo, where he pursued his studies under the tutlelage of Muhammad al-Sa'di, a qadi, for about ten years, returning to Jerusalem in 1484.[5]

Extensive knowledge of Arabic, Hanbali jurisprudence, and Islamic theology, as well as his hailing from highly regarded and well-connected family, led to Mujir al-Din's procuring important posts as a public servant. He was appointed the qadi of Ramla in 1484, and the chief Hanbali qadi of Jerusalem in 1486, holding this position for almost three decades until completing his service in 1516.[5]

Mujir al-Din's writings included two volumes of Quranic exegesis, a biographical dictionary of Hanbali scholars, a general history from the time of Adam through to the Middle Ages, and a work on the visitation of holy places, but the only one of these to be published was "The glorious history of Jerusalem and Hebron".[5] The central focus of the book, despite its title, is the history of Jerusalem. Though many books had been written by other Arab and Muslim authors on the virtues of Jerusalem, including about 30 composed during the Mamluk period alone, none of these set out to provide a comprehensive history of the city, making Mujir al-Din's work unique in both scope and design.[5]

The book is divided into four parts. The first outlines the history of Jerusalem, and to a lesser degree Hebron, from the time of Adam to the end of 13th century, incorporating both political developments and events of importance to Islamic and pre-Islamic monotheistic traditions. The second part provides a physical description of shrines and landmarks in Hebron and Jerusalem, with a focus on Muslim sites. Biographies of the various governors of Jerusalem and Hebron in the Ayyubid and Mamluk periods, as well as those of notable Mamluk figures who undertook special works in these cities are provided in part three. The fourth part concerns itself with the history of Jerusalem during Mujir al-Din's own lifetime, under the rule of Mamluk Sultan Qait Bay.[6] Composed in Jerusalem, Mujir al-Din alternates in referring to his place of residence as Filastin ("Palestine") and al-Ard al-Muqaddasa ("the Holy Land").[7]

Mujir al-Din's writings are quoted extensively in the works of 19th century Orientalists and 20th and 21st century scholars alike.[8] It is particularly valuable for what it reveals about the topography and social life of 15th century Jerusalem.[8] A number of copies of manuscripts of al-Uns al-Jalil are kept in libraries in Paris, London and Vienna. El Wahby, a Cairo-based publishing house printed his work in full. A French translation of excerpts of his work with a foreword by Henry Sauvaire was published under the title, Histoire de Jérusalem et d'Hébron depuis Abraham jusqu'à la fin du XVe siècle de J.-C. : fragments de la Chronique de Moudjir-ed-dyn (1876). This compilation was made up of excerpts of his work translated from a manuscript procured in Jerusalem and from the Egyptian edition.[9]

Translated excerpts of al-Uns al Jalil can be found in the work of Joseph Toussaint Reinaud and Joseph von Hammer-Purgstall.[10] Guy le Strange references the work of Mujir al-Din throughout his book Palestine Under the Moslems: A Description of Syria and the Holy Land from A.D. 650 to 1500 (1890), drawing upon his descriptions of various monuments to determine their state, appearance, and measurements at his time of writing.[11]

Mujir al-Din died in 1522.[2] He was buried at the base of the Mount of Olives just outside the walls of the Old City, a little to the north of the Garden of Gethsemane, between it and the Tomb of Mary.[12] His tomb, with its gondola-shaped dome, lies in the middle of the sidewalk on the main road and there are steps leading down from it on both sides to the Tomb of the Virgin.[4][13]

There is also a shrine in Nablus dedicated to the memory of Mujir Al-Din.[14]

It is documented that members of the Jerusalemite family of Quttainah are the descendants of Mujir al-Din al-Hanbali. On a Palestinian geneaology website, they explain that the nickname Quttainah (meaning "dried fig") was given to al-Hanbali family some 300 years ago due to their use of dried figs to cover gold they were trading in within Palestine from road robbers. The Quttainah family continues to own numerous properties in and around the Old City, including waqf properties. Since the 1948 Palestinian exodus, some members of the family live in the Palestinian diaspora, in other Middle Eastern countries and the Persian Gulf region.[15]