The Storm of the Century, also known as the ’93 Superstorm, or the (Great) Blizzard of 1993, was a large cyclonic storm that occurred on March 12–13, 1993, on the East Coast of North America. It is unique for its intensity, massive size and wide-reaching effect. At its height, the storm stretched from Canada towards Central America, but its main impact was on the Eastern United States and Cuba. The cyclone moved through the Gulf of Mexico, and then through the Eastern United States before moving into Canada. Areas as far south as central Alabama and Georgia received 6 to 8 inches (15 to 20 cm) of snow and areas such as Birmingham, Alabama, received up to 12 inches (30 cm) with isolated reports of 16 inches (41 cm). Even the Florida Panhandle reported up to 4 inches (10 cm),[2] with hurricane-force wind gusts and record low barometric pressures. Between Louisiana and Cuba, hurricane-force winds produced high storm surges across northwestern Florida, which along with scattered tornadoes killed dozens of people. Record cold temperatures were seen across portions of the South and East in the wake of this storm. In the United States, the storm was responsible for the loss of electric power to over 10 million customers. It is purported to have been directly experienced by nearly 40 percent of the country's population at that time.[3] A total of 310 people, including 10 from Cuba, perished during this storm.

The 1993 Storm of the Century marked a milestone in U.S. weather forecasting. By March 8 (and by some accounts even earlier), several operational numerical weather prediction models and medium-range forecasters at the US National Weather Service recognized the threat of a significant snowstorm. By March 12, many had reviewed the data and were convinced that a serious threat loomed overhead. This marked the first time that National Weather Service meteorologists were able to predict accurately a system's severity five days in advance. Official blizzard warnings were issued two days before the storm arrived, as shorter-range models began to confirm the predictions. Forecasters were finally confident enough in the computer-forecast models to support decisions by several Northeastern U.S. states to declare a State of Emergency before the snow even started to fall.[4]

In the South, however, temperatures in the days before the storm were typical for early March. Although large fluctuations in temperature are not unusual in the deep south, many residents doubted that freezing temperatures could return so rapidly or that snow was likely due to the rarity of significant snowfall later than February. Many local TV news stations were reluctant to even broadcast the forecast models, due to the extreme numbers being predicted by the computers, but the models turned out to be right.

During March 11 and 12, temperatures over much of the eastern United States began to fall quickly as arctic high pressure system built into the Midwest and Great Plains. The extratropical area of low pressure formed in Mexico and moved eastward into the Gulf of Mexico along a stationary front, which developed thunderstorm activity near its center. A strong shortwave trough in the southern branch of the polar jet stream accelerated the strengthening of the surface low. As the area of low pressure moved through the central Gulf of Mexico, a shortwave trough in the northern branch of the jet stream phased with the system in the southern stream, which continued significant strengthening of the surface low. A squall line developed along the system's cold front, which moved rapidly across the eastern Gulf of Mexico through Florida and Cuba.[5] The cyclone's center moved into northwest Florida by early on the morning of March 13, taking a significant storm surge into the northwestern Florida peninsula, which drowned several people.

Barometric pressures recorded during the storm were quite low: readings of 976.0 millibars (28.82 inHg) were recorded in Tallahassee, Florida and lower readings of 960.0 millibars (28.35 inHg) were observed in New England. Usually, such low readings near the coast of the Gulf of Mexico are observed only in hurricanes of Category 2 intensity on the Saffir-Simpson hurricane scale,[6] or within cyclonic storms out to sea. As this happened snow began to spread over the eastern United States, and a large squall line moved from over the Gulf of Mexico into Florida and Cuba. The low tracked up the east coast during the day on Saturday and into Canada by early Monday morning. In the storm's wake, cold temperatures for so late in the winter overspread the Southeast for a day or two.

This storm complex was massive, affecting at least 26 U.S. states and much of eastern Canada. Bringing cold air along with heavy precipitation and hurricane force winds, it caused a blizzard over much of the area it affected, including thundersnow from Texas to Pennsylvania and widespread whiteout conditions. Snow fell as far south and east as Jacksonville, Florida,[7] and areas of the Florida Panhandle got several inches of snow,[2] making it the most significant winter storm to affect the state since 1899.[8] Ice pellets (sleet) mixed in with the rain as temperatures in Tampa, in west-central Florida, hovered not far above freezing after the front passed.

Some affected areas in the Appalachian region saw more than 3.5 feet (1.1 m) of snow, and snowdrifts were as high as 35 feet (11 m). Every airport from Halifax, Nova Scotia to Atlanta, Georgia was closed for some time because of the storm. The volume of the storm's total snowfall was later computed to be 12.91 cubic miles (53.8 km3), an amount which would weigh (depending on the variable density of snow) between 5.4 and 27 billion tonnes.

In the South, where public works facilities (in most areas) generally have no reason to be prepared for snow removal, the storm is vividly remembered because it resulted in a complete shutdown of that region for three days. Cities that usually receive little snowfall, such as Chattanooga, Tennessee, received anywhere from 2 to 4 feet (0.61 to 1.2 m) of snow, causing some municipalities to adopt at least an emergency winter-weather plan for the future where one might not have existed before. Birmingham, Alabama, which normally receives 1 inch (2.5 cm) in a year, received 13 inches (33 cm), shattering the records for most snow in a single storm, a single month, and even a single season. The psychological impact in the Southern states, where average high temperatures in March tend to run into the 60s Fahrenheit (the upper teens Celsius), was magnified by the fact that it struck a week before spring. Syracuse, New York, which is accustomed to heavy snowfall due to yearly lake-effect snow storms, received a record 43 inches (110 cm) from the storm, while snowfall totaled over 12 inches (30 cm) in New York City and 2 feet (0.61 m) of snow fell in Hartford, Connecticut and Pittsburgh, Pennsylvania.

The weight of record snows collapsed many factory roofs in the South, and snowdrifts on the windward sides of buildings caused a few decks with substandard anchors to fall from homes. Though the storm was forecast to strike the snow-prone Appalachian Mountains, hundreds of people were nonetheless rescued from the Appalachians, many caught completely off guard on the Appalachian Trail, or visiting cabins and lodges in remote locales. Drifts up to 14 feet (4.3 m) were observed at Mount Mitchell. Snowfall totals of between 2 and 3 feet (0.61 and 0.91 m) were widespread across northwestern North Carolina. Boone, North Carolina—in a high-elevation area accustomed to heavy snowfalls—was nonetheless caught off guard by 36"+ of snow and 24 hours of temperatures below 0 °F (−18 °C) along with storm winds which (according to NCDC storm summaries) gusted as high as 110 miles per hour (180 km/h). Electricity was not restored to many isolated rural areas for a week or more, with power cuts occurring all over the east. Nearly 60,000 lightning strikes were recorded as the storm swept over the country for a total of seventy-two hours, and many may remember their local news organizations touting the term "thundersnow." As one of the most powerful storms in recent history, the storm has been described as the "Storm of the Century" by many of the areas affected.

Across the Northeastern states and eastern Canadian provinces, the storm put down an average of 15 inches (38 cm) of snow, which, though most certainly heavy, is not exceptional by most local standards, but still somewhat unusual for mid-March, especially in the southernmost parts of the region such as the Baltimore-Washington area. In southeastern Ontario and southwestern Quebec, where less severe winter blizzards are relatively common, snowfalls of more than 15 inches (38 cm) in Montreal and Ottawa were nevertheless far above average and came second only to record amounts set during the deadly Eastern Canadian Blizzard of March 1971, an exceptionally brutal Nor'easter still locally referred to in Quebec and parts of New York State as the "Storm of the Century".

The Derecho moves into the Florida coast during the overnight hours of March 13, 1993.

Besides producing record low barometric pressure across a swath of the Southeast and Mid-Atlantic states, and one of the nation's biggest snowstorms, the low produced a potent squall line ahead of its cold front. The squall line produced a serial derecho as it moved into Florida and Cuba shortly after midnight on March 13. Straight-line winds gusted above 100 mph (87 kn, 160 km/h) at many locations in Florida as the squall line moved through. The supercells in the derecho produced eleven tornadoes in the United States. One tornado killed three people when it struck a home which later collapsed, pinning the occupants under a fallen wall.[14]

A substantial storm surge was also generated along the gulf coast from Apalachee Bay in the Florida panhandle to south of Tampa Bay. Due to the angle of the coast relative to the approaching squall, Taylor County along the eastern portion of Apalachee Bay and Hernando County north of Tampa were especially hard hit.[2]

Storm surges in those areas reached up to 12 feet (3.7 m); higher than many hurricanes. With little advance warning of incoming severe conditions, some coastal residents were awakened in the early morning of March 13 by the waters of the Gulf of Mexico rushing into their homes.[15] More people died from drowning in this storm than during Hurricane Hugo and Hurricane Andrew combined.[3] Overall, the storm's surge, winds, and tornadoes damaged or destroyed 18,000 homes.[16] A total of 47 lives were lost in Florida due to this storm.[2] 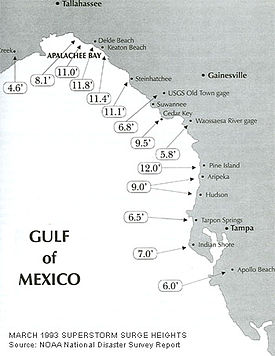 In Cuba, wind gusts reached 100 miles per hour (160 km/h) in the Havana area. A survey conducted by a research team from the Institute of Meteorology of Cuba suggests that the maximum winds could have been as high as 130 miles per hour (210 km/h). It is the most damaging squall line ever recorded in Cuba.

There was widespread and significant damage in Cuba, with damages estimated as intense as F2.[5] The squall line finally moved out of Cuba near sunrise, leaving 10 deaths and US$1 billion in damage on the island.

Tornadoes spawned by the storm

Under the weight of snow, a tree falls next to a car in Asheville, North Carolina

Temperatures accompanying the storm were unseasonably cold for late winter so close to spring: average daily maximum temperatures, in mid-March, are around 46 °F (8 °C) in Boston, 51 °F (11 °C) in Philadelphia, and 65 °F (18 °C) in Atlanta. During the 1993 storm, these places were all below freezing, and parts of New England saw daily maximum temperatures as low as 14 °F (−10 °C). Record low temperatures for March were recorded in much of the southern U.S. Birmingham recorded a record low of 2 °F (−17 °C) during the storm.

Comparisons to past storms