Primerica, Inc. (NYSE: PRI) is a referral marketer[6] of financial products and services using a hybrid model of direct selling, franchising and distribution.[1][7] [8]

Headquartered in unincorporated Gwinnett County, Georgia,[9][10] Primerica spun off from its former parent company Citi through an initial public offering on April 1, 2010. It is a financial services marketing organization in North America with 100,000 or more independent representatives,[11] including 22,000 Financial Industry Regulatory Authority (FINRA) Series 6 licensed[1] through Primerica's securities broker-dealer affiliate PFS Investments, Inc. in the United States, and through PFSL Investments Canada Ltd. in Canada. The company focuses on the sale of term life insurance,[1] as well as providing various financial products and services through its affiliates that have been added over the years, including mutual funds, variable annuities, segregated funds, managed accounts, loans, long-term care insurance, pre-paid legal services, auto insurance, home insurance, credit monitoring and debt management plans. Its client base was in excess of 6.3 million as of 2010.[11]

Founded in 1977 by Arthur L. Williams, Jr. as A.L. Williams & Associates (A.L. Williams), the company established its base by mass-marketing the concept of "Buy Term and Invest the Difference."[7] With "BTID" the company claimed its mostly middle-income client base could purchase sufficient protection with term life insurance and systematically save and invest in separate investment vehicles, such as mutual fund Individual Retirement Accounts.[1] A.L. Williams was initially established as a privately held general agency, at first selling term life insurance policies underwritten by Financial Assurance, Inc. (FAI).

PennCorp's growth due to MILICO's underwriting caught the attention of Bill Woodside, Chairman & CEO of American Can Company, a former Dow Jones 30 blue chip can and container producing company based in Greenwich, Connecticut founded in 1901.[12] Due to the growing rise of plastic as a replacement for aluminum cans, the company looked to acquire financial services providers and move away from the dying manufacturing industry, having acquired life insurance holding company Associated Madison from Gerry Tsai Jr in 1982. With this acquisition Woodside created a new financial services division for American Can and hired Tsai, who succeeded him as Chairman & CEO, as the new head. In September, 1982 American Can and PennCorp signed a merger agreement. In 1983 the merger was finalized, making American Can the parent company of PennCorp and MILICO, signing a new contract with ALWC through the year 2000. In 1986 Nelson Peltz's Triangle Industries bought American Can's packaging division, along with rights to the name of the company. Therefore on March 6, 1987 American Can announced that it would change its 86-year-old name to Primerica Corporation,[13] hence giving birth to the new and currently recognized name "Primerica."

The newly-named Primerica Corporation targeted Smith Barney as the first significant purchase that moved the company completely into financial services with the May 1987 announcement of its intent to buy the Wall Street brokerage for $750 million,[14] which would later end up as Primerica's sister company under Citigroup in 1998.[15]

In 1985 ALWC began the procedure to open business in Canada. After encountering legal and cultural roadblocks to expanding outside the United States, ALWC began selling insurance products of Pennsylvania Life Insurance Company, a Primerica subsidiary, in Canada in 1986.

In November, 1989, Primerica purchased the remaining 30% of ALWC that it did not previously own and the privately held General Agent, A.L. Williams, Inc. In 1991, Primerica Corporation changed the name of A.L. Williams to Primerica Financial Services. The following year MILICO, Primerica's life insurance underwriter, changed its name to Primerica Life Insurance Company, and its broker-dealer FANS changed to PFS Investments, Inc.[15]

In December 1997, Primerica announced it was going to begin offering pre-paid legal through Pre-Paid Legal Services, Inc., at the time both subsidiaries of Travelers Group, Inc.[22]

In 1998, the U.S. Securities and Exchange Commission (SEC) censured and fined PFS Investments Inc., the securities arm for Primerica, for failure to properly supervise a group of registered representatives in Dearborn, Michigan. The SEC found that PFS Investments Inc. had failed to have in place effective policies and procedures to follow up adequately on three complaints received about the Dearborn registered representatives, "selling away" activities. Prior to the SEC's ruling, PFS Investments Inc. hired an independent consultant to review its supervisory and compliance policies and procedures to prevent and detect violations of the federal securities laws. By the date of the ruling, PFS Investments reported it had complied with the final recommendations made by the independent consultant.[23]

In 1998, Travelers Group and banking giant Citicorp merged creating Citigroup (NYSE: C). Primerica and its affiliates continued to operate as subsidiaries of Citigroup, although the Travelers insurance business was spun off in 2002. Along with Primerica, other major brand names under Citigroup included Citibank, CitiFinancial, Citicorp Trust Bank, Smith Barney, and Banamex.

Long-time veteran executives John Addison and Rick Williams, whom Art Williams quoted in his book Coach as "two true sons of A.L. Williams",[24] were hired as co-CEOs in 2000, with Glen Williams promoted to President in 2005.

55,000 representatives attend the 2007 convention at the Georgia Dome 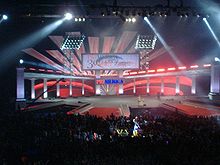 View of the 2007 Convention Stage

Due to the general economic downturn and Citigroup's acceptance of government bailout funds totaling nearly $45 billion in 2008, in February 2009 its management decided to cancel Primerica's 2009 convention and a trip to the Atlantis Resort in the Bahamas for top agents, days before the trip was to take place.[27] However, in spite of the cancellation, Primerica's executives in August 2009 announced the company was holding two new trips for top producers within the company to Maui and Las Vegas planned to occur back to back in February 2010. It was stated that the trips would be fully funded from Primerica profits, and that this justified the merits of the sales force.[28]

The company announced on June 17, 2010 that it will hold its biannual convention in the Georgia Dome June 15–18 in 2011.[29] This will mark the first time since its acquisition by the Primerica Corporation in 1990 the company has had one as an independent entity. It is expected to attract around 60,000 attendees.[30]

Citigroup attempted to sell Primerica in 2008,[31] having received several bids from life insurance companies and private equity firms interested in buying.[32][33] At the time the market value of the company was estimated to be $7 billion, roughly 15 times its annual earnings[34] and Citi was trying to match various bidders in groups that could bid for the unit together. Initially, a sale to JC Flowers & Co. LLC and Protective Life Corp was underway until the deal was canceled last minute for publicly undisclosed reasons.[35]

In May 2009 the Primerica executive team led by co-CEOs John Addison and Rick Williams approached private equity firm J.C. Flowers & Co. yet again, as well as Blackstone Group LP and TPG Inc [31] in a new attempt to have the company bought, a plan which Citigroup did not endorse.[36]

On November 5, 2009 Citi announced that it intended to spin off Primerica through an initial public offering.[37] The Primerica executive and legal team filed an S-1 with the U.S. Securities and Exchange Commission (SEC),[38] having officially publicly announced the intention of becoming a public company. Citi would claim all profit from the primary offering, as well as continue to receive income from a significant portion of existing Primerica business,[39] with Citi Holdings CEO Michael Corbit claiming the move to be "the best separation alternative for this franchise.[37]

Primerica filed a final amended S-1 and preliminary prospectus with the SEC on March 17, 2010, indicating that it will offer 18 million shares[40] to the public through the IPO, with underwriters having the option to purchase an additional 2.7 million shares. The first trading occurred on April 1, 2010. Initially, the expected share price was in the $12 – $14 range, having ended up being priced $15 a share on March 31, 2010,[41] resulting in Citi raising 27 percent or $30 million more than $290 million projected through the IPO by selling 3.36 million more shares than the anticipated 18 million.[42] The first day of trading saw the stock surge 31 percent to end up closing at $19.65 a share.[43] In a separate offering, Private equity firm Warburg Pincus has bought 17.2 million shares, resulting in a 23 percent stake in Primerica, and up to 33 percent if Warburg decides to exercise warrants to purchase an additional 4.3 million shares from Citi.[44] It is expected Citi will have a stake between 32 percent and 46 percent and will divest its interest in Primerica "as soon as possible"[45] to fulfill its original goal of raising cash by shedding assets to improve financial performance.

In 2005[46] Primerica representatives were able to begin using the TurboApps[47] application developed by the Primerica Field Technology team via Palm handheld devices,[48] allowing the insurance quotes to be obtained instantly and applications filled out electronically, effectively speeding up the underwriting process for Primerica Life.[49] In 2007 the electronic application process was extended to include the $.M.A.R.T. loan program.

In the summer of 2009, Primerica's IT department started rolling out its line of TurboApps software on the windows mobile platform. With this change, wireless submission of applications is now possible.[50]

Primerica's life insurance underwriter Primerica Life Insurance Company and its New York subsidiary National Benefit Life are rated A+ as "Superior" with an outlook of stable by A. M. Best as of June 2011.[51] Standard & Poor's has the company rated AA as "Very Strong."[52] The Insurance Marketplace Standards Association, a non-profit organization based out of Bethesda, Maryland with the intent to create ethical standards for the insurance industry, has renewed qualification for Primerica Life and National Benefit Life for high standards and quality business, "continuing dedication to ethical business practices."[53]

In 2009 the Better Business Bureau changed their rating system from “satisfactory/unsatisfactory” to an letter-based rating. Primerica received an A+ rating from the BBB, and is also a BBB Accredited Business since January 1, 1980.[55]

In 2010, Primerica has paid a total of $503,115,928 in compensation to their agents. These licensed Primerica agents, who are licensed in life insurance, each earned an average of $5,296 in compensation during 2010. The income level that an agent achieves varies based upon the licenses obtained, contract level at which the agent receives commissions and the amount of personal production and commission-based businesses written in the field as well as the size and activity of an agent's organization. This is also dependent on whether the agent is an RVP and is also licensed in securities, debt, and other financial parts of the company. Actual gross cash flow is, among other factors, dependent upon the size and scale of a representative’s organization, the number of sales and the override spread on each sale, and the ability of each of their agents.[56]