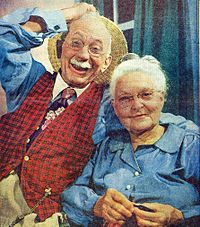 Boob and Neva Brasfield in 1958

Laurence Brasfield was born in Smithville, Mississippi and cited his mother Nonnie's humor as a major influence in becoming a comedian. In 1912, at age 14, he joined the Mighty Haag Circus as a roustabout. The next year he did blackface comedy with a horse-and-wagon show[1] and later joined a New Orleans, Louisiana stock company. Soon he was traveling with the Redpath Chautauqua tent circuit which often featured William Jennings Bryan. Early in his career, he adopted the nickname Boob.

For the next ten years, Brasfield appeared on Broadway and in the road companies of hit shows.[2] In 1920, he had a part in Miss Lulu Bett, and was stage manager for Enter Madame which had a two-year Broadway run. In 1922, he became stage manager for the smash hit Abie’s Irish Rose at the Republic Theatre.[1]

Neva I. F. Greevi was born in Luther, Michigan and attended Ouachita Baptist College in Arkadelphia, Arkansas for three years. She worked as a cashier before marrying Brasfield, nine years her junior, in 1919; and was a leading lady with the W. I. Swain tent show.[1]

Beginning in the mid-1920s, the Brasfields were featured players with (Jess) Bisbee's Comedians, a popular touring tent repertory troupe based in Memphis, Tennessee which was part of Bisbee's Dramatic Shows. Boob played the requisite "Toby" character as a hillbilly, and was known as the King of Tobys for his quick ad-libbing ability and comic facial contortions. Brasfield was the highest-paid of the Bisbee troupe; he wrote, directed and appeared in most of its plays.[1] His younger brother, comedian Rod Brasfield, joined him and they performed with the troupe with Rod as Boob's straight man.

In 1933, after a tent show folded in Lewisburg, Kentucky, where he was the headliner, Brasfield organized the performers into his own troupe, the Century Players. They were based out of Centerville, Tennessee during the winter of 1933–34 and appeared at schoolhouses in surrounding towns including Little Lot, Bon Aqua and Hohenwald. On their nights in Centerville, native Minnie Pearl would perform.[1] Boob also owned a circle stock company from 1939–42 that played in the Gadsden Theatre in Gadsden, Alabama.[3]

Brasfield adopted the Uncle Cyprus character, shortened to Cyp, when he began performing on radio programs with his brother Rod in the mid-1940s. Neva became his frequent stage partner as Aunt Sap. The characters were created by Rod for his routines about fictional residents in his adopted hometown of Hohenwald, Tennessee.[4] Cyp and Sap were an older married couple who quibbled over everyday matters, with Cyp often coming off as a henpecked husband. They continued touring the country through the 1940s, doing tent shows and sketch comedy. Boob also wrote Grand Ole Opry skits for Rod and Minnie Pearl, among others. By the early 1950s, they retired to their ranch called Rancho Pocito in the Rio Grande Valley near Edinburg, Texas.[5] Both were made Kentucky colonels, an honorary title bestowed by the governor of the state.

In 1955, long-time friend Red Foley convinced them to return to show business on ABC-TV's Ozark Jubilee in Springfield, Missouri.[2] They became mainstays and were among the few performers with the show for its entire run. The couple, often introduced with the opening bars of "Turkey In The Straw", usually performed small-town domestic sketch comedy together, sometimes involving others on the show. Uncle Cyp also performed solo; or with Foley, Bill Ring, announcer Joe Slattery or even Brenda Lee. They had one daughter, Bonnie Inez Brasfield, who occasionally appeared in their routines. Rod also once appeared on the show with Cyp in 1957. Boob appeared on other TV programs as well, including The Ed Sullivan Show in 1956.[6]

In January 1958, The Billboard reported the Brasfields and Rod had begun filming a series of 52 fifteen-minute comedy programs for syndicated distribution.[7] During the summer of 1958, the couple toured with Bisbee's Comedians in Kentucky and Tennessee and flew to Springfield on alternate Saturdays to appear on the Jubilee.[8] On August 29, 1959, Uncle Cyp was a fill-in host on the show;[9] and in October 1959, Boob sustained minor injuries from a backstage fall during a Cotton Bowl performance with Foley and a Jubilee touring unit at the Texas State Fair.[10]

After the Jubilee was canceled in 1960, the Brasfields appeared on its spin-off, Five Star Jubilee, in 1961; and Boob toured with Foley through 22 states that summer.[11] The couple then retired from show business for the final time and returned to Texas. Uncle Cyp appeared on the 1963 Decca LP, The Red Foley Show (DL-4341).