The Package Q Airstrike was the largest air strike of the Gulf War,[3] and the largest strike of F-16s in military history. It was also the only time during the war that any aircraft other than the F-117 was used to attack targets in Baghdad, which was considered to be the most heavily defended area of Iraq. The main target of the strike was the old Osirak Nuclear Reactor in Baghdad, along with many other military sites across the city. The attack was generally a success, but three aircraft were shot down, with two pilots becoming POWs. The majority of the mission goals were met, with the reactor itself completely destroyed and most of the secondary targets hit as well. This attack was the largest of the war and represented an attempt to strike Iraqi defenses a serious blow. Nevertheless, the raid illustrated how a number of small incidents or stresses, none by themselves necessarily serious, could contribute to an unsatisfactory outcome,[3] which eventually convinced USAF commanders to call off further airstrikes against downtown Baghdad.[1]

The air campaign against Iraq was going very well for the Coalition; thousands of sorties had been flown around the clock across targets in Kuwait and Iraq. The Iraqi Air Force had proven to be very reluctant to attack the overwhelming Coalition air power. 56 F-16s from the 388th Tactical Fighter Wing and 401st Tactical Fighter Wing, along with some F-4s from the 561st Fighter Squadron and F-15Cs from the 53d Fighter Squadron were organized into the largest strike of the war and the largest F-16 strike in history.

However, the organization was confused, with many air commanders not receiving their orders until the night of February 18. Overnight three more main targets, in downtown Baghdad, were added. This meant that once the attack force had hit the reactor, which was in the southeast corner of the city, it would have to proceed to the downtown area, which necessitated flying through hundreds of alerted SAMs and AAA, making them easy pickings. However, there was no time to change the mission plans, and the attack went ahead anyway.[3]

Because of the distance between the airfields and Baghdad, the F-4s were lightly loaded, each only carrying 2 HARM anti-radiation missiles because of their high fuel consumption rate. This limited the number of targets the SEAD aircraft could attack. The F-16s on the other hand were very heavily loaded, each carrying Mark-84 bombs, two external fuel tanks, two air-air missiles to protect them from Iraqi aircraft, and 90 bundles of chaff, with fifteen flares.

The Iraqi forces had several air bases within striking distance of the city that could be ready in minutes, all housing MIG-29s. The MIG-29s were armed with the French-made R550 Magic air-air missile. The Iraqi forces also had thousands of AAA and SAM sites throughout the city, ranging from WWII-era flak guns to AA-8 missiles. Overall the Iraqis had the resources to inflict many casualties on the strike force.[4] 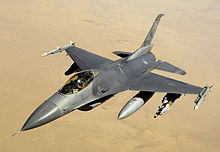 On the afternoon of February 19, all the aircraft took off from Saudi Arabia and Bahrain. From there, they all met with tankers in Saudi Arabia, near the border of Saudi Arabia and Iraq. Link-up and refueling with the tankers ran into problems. There was bad weather along the tanker tracks, and the tankers approached the release point too early. Consequently, they throttled back to minimum speed, which in turn seriously affected the accompanying fighters. The F-16s were soon close to stalling out, and some had to light afterburners just to stay airborne; four fighters coming off the last tanker fell so far behind that their mission commander ordered them to return to base.

After the refueling, all the aircraft turned towards Baghdad, and headed out in force. They had to dodge AAA and SAMs sporadically along the trip, though as the package reached Baghdad airspace, it broke out into the open. Iraqi gunners greeted the Americans with a couple of high-altitude shots in the middle of several formations. Not surprisingly, there were difficulties in communicating among mission groups in the package; the mission commander of the flight attacking downtown Baghdad estimated that he received approximately 80 percent of the calls. Adding to the disarray of the flak exploding below, the Iraqis threw 100-mm shells into the formations. From the moment the package approached Baghdad's air defenses, the Weasels engaged enemy SAM sites. However, there was a problem with the Weasels allocated to the mission; either because of fuel, timing, or the decision of the package commander, not all made it to Baghdad; moreover, some Weasels did not fire all their HARMs, which suggests that they had to leave because of fuel problems.

Approaching their targets, the “downtown” aircraft (flying F-16s with newer model engines) passed F-16s on the way to, rolling in on, and leaving targets all in a hostile environment. On their way to downtown, the F-4 "Wild Weasels" left, being low on fuel. This left the F-16s and F-15Es alone against the air defenses. As Maj. John Nichols rolled in to strike his target, the Iraqi Air Force Headquarters, he heard the Weasels call that they were leaving. Unfortunately, cloud cover obscured the target; Nichols rolled off to turn to an alternate target, an oil refinery which was under attack by a portion of his formation.

Up to this point, the Iraqis had fired most of their SAMs ballistically. Within a short time of the Weasel call that they were leaving, SAMs directly engaged Nichols' flight. Many SAMs were now guided and most of his flight had to take evasive action, which included “last ditch maneuvers” such as jettisoning fuel tanks and bombs. Approximately half of the flight struck the oil refinery; others were en route to alternate targets when SAMs engaged and forced them to jettison ordnance. SAMs hit one F-16 just as the last bombs were striking the oil refinery. As the flight egressed Baghdad, evading SAMs, another missile impacted near another F-16. Both aircraft were lost, but their pilots survived the war. In all, the participants in the wild ride over the capital counted twenty SAMs in the air; one pilot dodged no fewer than six. Many of the F-16 aircraft sustained major or minor damage, but stayed airworthy.

From the VTR tape of that day:
[citation needed]

The commotion for the survivors of the strike did not end when they left Baghdad. To bring an end to their day, eight MiG-29s started closing toward the rear of the F-16s as they exited the capital's environs; the F-15E top cover had apparently left earlier after the F-4s. When F-16s attacked the MiGs, the Iraqis fled. By the time that the F-16s approached the border some were almost out of fuel. One fighter would have crashed short of Coalition territory had not a KC-135 tanker from the Kansas National Guard crossed over into enemy territory. When the F-16s began refueling in Iraqi territory, it had only 800 pounds of fuel on board, in the words of the wing commander, flying as a wingman, “an eye-watering situation.” On the way back, a third F-16 was hit by an Iraqi SAM, and the pilot bailed out just inside the border of Iraq. US Search and Rescue found him before he was captured.[5]

No one factor caused the loss of three F-16s. Rather, a series of stresses, the lateness of the Air Tasking Order, not enough coordination time, a tactical approach that provided the Iraqis considerable warning, fuel problems for the Weasels and other aircraft, bad weather, and insufficient attrition of the defenses combined to create a dangerous situation, one ultimately catastrophic for three aircraft.

There were a number of crucial lessons from Package Q. The most obvious was that Iraqi defenses in Baghdad remained lethal: Consequently, it was not worth the risk to send conventional aircraft into the heart of those defenses, especially when F-117s could strike such targets with little risk as a result of its stealth qualities and magnified by its precision-guided munition capabilities. Iraqi defenses never were able to force F-117s to jettison bombs over populated areas, and the risk of civilian casualties were reduced.

There was, however, a crucial operational turn that the mission's failure caused. General Glosson and his planners had hoped that destruction or at least degradation of Baghdad's air defenses would have allowed them to send large groups packages of F-16s into the capital during the daytime. Their targets, as on the morning of day three, would have been the larger command headquarters and symbols of the regime, such as those of the Ba'ath Party, Republican Guard, and Directorate of General Military Intelligence. These structures were so big that the F-16s, even though less accurate, could hit them with a fair probability of success. As symbols of the regime, the destruction of such headquarters was hoped to have had major political and military effects.[1]

The difficulties that Package Q encountered, as well as the potential for inadvertent bomb release by aircraft under SAM attack, however caused General Horner and his planners to decide against sending any more such F-16 groups against downtown Baghdad. What speaks well for the American leadership in this air war was the fact that it did not repeat Package Q to prove some doctrinal beliefs of the high command at the expense of aircrew lives. American air commanders adapted to the situation as it was. There would be no more conventional attacks into the heart of Iraqi defenses. Moreover, F-16 packages would remain smaller, and thus more manageable and easier to coordinate and fly for the remainder of the war.[3]