Live with Regis and Kelly is a syndicated American television morning talk show, hosted by Regis Philbin and Kelly Ripa. The show, known as Live with Regis and Kathie Lee when Kathie Lee Gifford was co-hosting, has aired since 1983 in New York City and 1988 nationwide. Tony Pigg has been the show's announcer since its conception. The show began broadcasting in high definition in its 2008–09 season.

On January 18, 2011, Regis Philbin announced that he will be leaving the show at the expiration of his current contract.[1][2] On September 6, 2011, Philbin officially announced that his last show will be on November 18, 2011.[3] Producers say that Live will continue with Kelly Ripa, but a new co-host has not yet been announced.

The show's original title was AM Los Angeles, a local show, that was broadcast only in the Los Angeles area. It premiered in 1975, and the original hosts were Regis Philbin and Sarah Purcell. Purcell departed the show in 1978 and was replaced by Cyndy Garvey. AM Los Angeles ended its run in 1981.

Philbin and Garvey relocated to New York City in 1983, resuming their show as The Morning Show on April 4 of that year, again as a local show seen only in the New York City market. In 1984, Garvey left the show, and was replaced by Ann Abernathy. When Ann Abernathy became pregnant in 1985, she also decided to leave the show. She was replaced by Kathie Lee Gifford. Gifford would remain Philbin's co-host from June 24, 1985 to July 28, 2000.

In the weeks leading up to the show's national debut, the title was changed to Live with Regis and Kathie Lee to prepare for the expansion. On September 5, 1988, Buena Vista Television (BVTV) began syndicating the show nationally.

On February 29, 2000, Gifford announced her decision to leave the show to pursue her singing career, and spend more time with her family. Her last show was on July 28, 2000.

After Gifford's departure, the show, renamed Live with Regis, continued with guest co-hosts including Philbin's wife Joy, among others. During this time, Philbin won the Daytime Emmy for Outstanding Talk Show Host, and was also hosting ABC's popular Who Wants to Be a Millionaire. During "auditions" for co-hosts, Kelly Ripa became a favorite and front-runner, especially after a segment on the first episode on which she was a guest host on November 1, 2000.[5]

Ripa was named the permanent co-host on February 5, 2001,[6] and the show was retitled Live with Regis and Kelly. Since Ripa took over, the show's ratings have increased according to E!.[citation needed] Kathie Lee Gifford returned as special co-host alongside Regis and Kelly on September 14, 2007, to celebrate Live's 20 years in national syndication, and as a guest on April 14, 2009.[7] 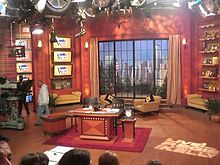 Live with Regis and Kelly set before a live taping.

On January 18, 2011, Philbin announced that he would leave the show by the end of the year. On February 7, 2011, it was confirmed that Philbin will officially retire from hosting sometime in November 2011.

After Philbin's departure in November, the show will be renamed Live with Kelly, mirroring what was done at the time of Kathie Lee Gifford's departure. Various co-hosts will fill in alongside Ripa until a permanent co-host is found; the staff expects this to occur by May sweeps. Producers recently announced that Jerry Seinfeld will be the first of the guest co-hosts. Seinfeld will co-host with Kelly from November 21-23, 2011.[10]

Live, as implied in its name, is broadcast live weekdays at 9 a.m. ET, and on tape delay at 9 a.m. local time on stations west of the Eastern Time Zone, with few exceptions; as such, it is one of the few first-run syndicated programs to broadcast in a common timeslot on most stations carrying it. The show airs on all of ABC's owned-and-operated stations with the exception of WLS-TV in Chicago, where Windy City Live, which replaced The Oprah Winfrey Show, airs in that time slot (similar to Live, Oprah evolved from the former AM Chicago, a morning talk show on WLS hosted by Oprah Winfrey in the 1980s). Instead, Live airs on the local feed of WGN-TV. (Because of syndex laws, it does not air on WGN's superstation feed.)[11]

The show features bantering between Regis and Kelly, phone-in contests, celebrity and non-celebrity guests.[12] It is produced by Michael Gelman.[13] The first 22 minutes, known as "host chat", is improvised and also the most popular segment. During the segment, the hosts often react to stories in the local newspapers or other media. The host chat segment typically plays on the contrast between Philbin's cantankerous on screen persona and Ripa's, and previously Gifford's, more cheerful and sunny disposition. Following the host chat, a home viewer is called to participate in a LIVE's Travel Trivia, with the chance to win a vacation prize package and a prize for the audience. Following the contest, the rest of the show features special segments and interviews with both celebrities and regular people with a story to tell. The final 3 minutes is the "Regis and Kelly's Inbox" segment, when viewer mail is read.

Its latest theme song, composed by Gabriel Saientz after an on-air, $100,000 contest, made its debut on January 5, 2009, the day "Live" started broadcasting in high definition. Slight changes such as new furniture and flooring were made to the set.[14]

Live has consistently been rated among the top daytime talk shows in the US, behind The Oprah Winfrey Show.

The Live series has inspired similarly formatted talk shows. Some have been successful (The View), while others have had limited or no success (The Tony Danza Show, Living It Up! With Ali & Jack). The now canceled British television series, Today with Des and Mel, was based on Live.

Co-host for a Day Searches

In October 2000, before Kelly Ripa was confirmed as the permanent replacement for Kathie Lee Gifford, non-celebrities were chosen as guest co-hosts in the "Real Person Co-host for a Day Search."

In June 2001, five college students were picked to co-host the show with Regis while Kelly Ripa was on maternity leave in the "Co-Ed Co-host for a Day Search." Among those chosen were Stacie Watts, Maria Sansone, and Monica Palumbo.

In August 2009, on-air personalities from ten television stations which carry the show were chosen as guest co-hosts in "From Local to LIVE: Co-host for a Day Search."

Substitutes for Philbin, airing the week of August 3 to 7:[15]

Substitutes for Ripa, airing the week of August 17 to 21:

In August 2010, female broadcasters from different radio stations were chosen as guest co-hosts in the "Women of Radio Co-host for a Day Search."

Substitutes for Ripa, airing the week of August 17 to 20:

In January 2011, five male radio DJ's were chosen to co-host with Ripa during the week of January 24.

Substitutes for Philbin, airing the week of January 24 to 28:

Main article: List of Live with Regis and Kelly episodes

Every season, LIVE! tapes about 260 episodes.

Every season, Regis and Kelly also host a Halloween special where the co-hosts portray some of the best moments and characters of the past year. The days guests also dress up in costumes that follow in the theme of the show (e.g. reality television). Additionally, prizes are awarded to the audience members with the best costumes. For Valentine's Day, Regis and Kelly get into the spirit by allowing male viewers to propose on their show. They also play matchmaker to friends, and marry couples live on the air. Every Mother's Day, the co-hosts celebrate moms everywhere on their annual "Mom's Dream Come True" special where deserving moms get the surprises of a lifetime.

Since the cancellation of The Oprah Winfrey Show, Live! has been rated the top syndicated daytime talk show in the US averaging 5 million viewers per episode according to daytime television ratings.[16]

On September 18, the first show back after the terrorist attacks of September 11, 2001, Live was on the air for an extended time with Philbin and Ripa discussing the attacks. The opening credits featured a still image of an American flag and the World Trade Center.[5]