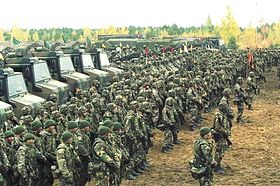 According to legend, Gran Duke of Lithuania Gediminas (ca. 1275 – 1341) dreamt of an iron wolf howling like a thousand wolves on a hilltop and consulted a pagan priest Lizdeika for its interpretation. He was told: "What is destined for the ruler and the State of Lithuania, is thus: the Iron Wolf represents a castle and a city which will be established by you on this site. This city will be the capital of the Lithuanian lands and the dwelling of their rulers, and the glory of their deeds shall echo throughout the world". This city is "eternal capital" of Lithuania Vilnius. Iron Wolf is popular name for various organizations, this name wear football (soccer), rugby, basketball and other sport clubs, subdivision of lithuanian scouts etc. This name represents Lithuanian defense readiness, fighting spirit and heroic inspiration.

MIB "Iron Wolf" - the biggest unit of land forces of Lithuania Armed Forces, consists of the command, its elements and six battalions stationed across Lithuania and named after Lithuanian Great Dukes as the tradition of the Lithuanian Armed Forces goes:

The unit originated in June, 1990, when a separate Defence Squad was created. Same year, in autumn, the Honors Guards Company was created.

The soldiers of the brigade participate in exercises of various levels as in Lithuania as in abroad as well. In addition, they are conducting peacekeeping operations in Afghanistan and stand by period in NATO Response Force and Battlegroup of the European Union. The Brigade constantly takes part in joint projects, international operations, and wargames together with other countries' military units. Among those are the British Armed Forces, the Army of Denmark, the Army of the Czech Republic, the United States Military, Poland and Germany.

The name of the brigade relates to the foundation legend of the city of Vilnius. According to it, Gediminas, the grand duke of Lithuania, had a prophetic dream that involved an iron wolf howling on a hill where the city was later built. The battalions are named after the former rulers of Lithuania.

As of this edit, this article uses content from "Lithuanian Armed Forces :: Structure » Land Forces » Units » Motorised Infantry Brigade Iron Wolf", which is licensed in a way that permits reuse under the Creative Commons Attribution-ShareAlike 3.0 Unported License, but not under the GFDL. All relevant terms must be followed.