English Grammar In Use

English Grammar In Use

English Grammar In Use is a self-study reference and practice book for intermediate to advanced students of English. The book was written by Raymond Murphy and published by Cambridge University Press. 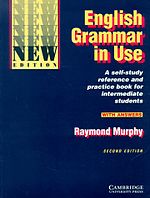 Book cover of the second edition

The book has been widely used by English language students, especially those from non-English-speaking countries, as a practice and reference book. The book has achieved a great reader acceptance because of its accuracy and simplicity. Though the book was titled as a self study reference, the publisher states that the book is also suitable for reinforcement work in the classroom. There are two versions of the book (with or without answer key)[4]. The book is divided into units, each unit (typically of two facing pages) has the lesson itself on the left page, while the right page contains exercises on that lesson. The book's units are ordered according to the lesson simplicity; or starts with the basic topics and goes up to more advanced topics. The author advises readers to flip over and find whichever topics they feel they need improvement on. A study guide is placed at the end of the book, which contains exercises that when solved reveal what topics student needs improvement on, and suggests the unit numbers the student should study; and thus the reader can figure out which units to study and which to omit.

Following is a list of the main book parts (as in the third edition). The number of units and their order slightly differ among different editions.

Other books in the series