A Malfunction Indicator Lamp, this one labeled "Service Engine Soon". 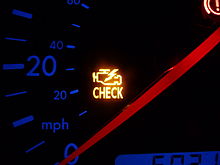 A MIL "Check Engine" light on a Volkswagen Bora indicating a fault in the Engine Management System.

A malfunction indicator lamp (MIL), commonly referred to as the "Check Engine Light", is a tell-tale to indicate malfunction of a computerized engine management system. It is found on the instrument panel of most automobiles. When illuminated, it is typically either an amber or red color. On vehicles equipped with OBD-II, the light has two stages: steady (indicating a minor fault such as a loose gas cap or failing oxygen sensor) and flashing (indicating a severe fault, that will eventually destroy the catalytic converter, such as a misfire). When the MIL is lit, the engine control unit stores a fault code related to the malfunction, which can be retrieved with a scan tool and used for further diagnosis. The malfunction indicator lamp usually bears the legend check engine, service engine soon, or a pictogram of an engine. In the United States, specific functions are required of the MIL by EPA regulations.[1]

The MIL appeared in the early 80s along with computerized engine controls. Even the earliest systems, such as GM's CCC (Computer Command Control) system had self diagnosis functionality. When the computer detected a fault, it illuminated the MIL. Up until OBDII, on most cars the MIL could output codes, when two pins on the ALDL are jumped, the light would flash the codes, for instance (blink) (pause) (blink) (blink) for code 12. Some manufacturers, such as Honda, retained this feature even after OBDII.

Some older vehicles had a single indicator labeled "trouble" or "engine"; this was not a MIL, but an "idiot light" meant to indicate serious trouble with the engine (low oil pressure, overheating, or charging system problems) and an imminent breakdown. This usage of the "engine" light was discontinued in the mid-1980s, to prevent confusion with the MIL. The MIL is commonly referred to today as the "check engine light" or the "service engine soon light".

Some vehicles made in the late 80s and early-to-mid 90s have a MIL that illuminates based on the odometer reading, regardless of what is going on in the engine. For example, in several Mazda models, the light will come on at 80,000 miles and remain lit without generating a computer trouble code. Volvo had a light labeled "Lambda", lambda sond being another name for oxygen sensor. This was done in order to remind the driver to change the oxygen sensor.

Some American-built 1973–1976 Chrysler Corporation vehicles had a similar odometer-triggered reminder: "Check EGR", which was reset after service at a Chrysler dealership. The MIL is also illuminated prior to starting the engine, along with other tell-tales on the dashboard, to demonstrate that the lamp is working and not burned out. The lamp will turn off once the car is started if no monitored faults exist. The MIL will also illuminate if the engine has been cranked but failed to start after returning the ignition to "ON." In most modern vehicles this is usually due to not giving the engine enough cranking time to start. In pre-fuel injection years many cranking attempts were sometimes required to start the car. If the engine fails to start one the second or third attempt then an actual visual check of the engine could be required. If the engine suddenly stalls or is triggered by an overload, such as on a stick shift car, the MIL will also illuminate until the engine is started again.

Higher amounts of methanol/ethanol (or other additives) than the engine is equipped to handle may trigger the MIL(see E85). These burn differently from gasoline, and the EFI system may mistakenly interpret the oxygen sensor's readings as being incorrect. Oxygenated gasoline can cause this false triggering in early EFI systems.[citation needed]