CMGs differ from reaction wheels. The latter applies torque simply by changing rotor spin speed, but the former tilts the rotor's spin axis without necessarily changing its spin speed. CMGs are also far more power efficient. For a few hundred watts and about 100 kg of mass, large CMGs have produced thousands of newton meters of torque. A reaction wheel of similar capability would require megawatts of power.

The most effective CMGs include only a single gimbal. When the gimbal of such a CMG rotates, the change in direction of the rotor's angular momentum represents a torque that reacts onto the body to which the CMG is mounted, e.g. a spacecraft. Except for effects due to the motion of the spacecraft, this torque is due to a constraint, so it does no mechanical work (i.e. requires no energy). Single-Gimbal CMGs exchange angular momentum in a way that requires very little power, with the result that they can apply very large torques for minimal electrical input.

Such a CMG includes two gimbals per rotor. As an actuator it is more versatile than a single-gimbal CMG because it is capable of pointing the rotor's momentum vector in any direction. However, the torque caused by one gimbal's motion often must be reacted by the other gimbal on its way to the spacecraft, requiring more power for a given torque than a single-gimbal CMG. If the goal is simply to store momentum in a mass-efficient way, as in the case of the International Space Station, dual-gimbal CMGs are a good design choice. Instead, if a spacecraft requires large output torque per available input power, single-gimbal CMGs are a better choice.

Most CMGs hold the rotor speed constant. Some academic research has focused on the possibility of spinning up and down the rotor as the CMG gimbals. These so-called variable-speed CMGs (VSCMGs) offer few practical advantages, mostly because the output torque from the rotor is likely orders of magnitude smaller than that caused by the gimbal motion. So, this effect adds nothing of practical value on the time scale of the motion typical of CMGs. However, thanks to the additional degree of freedom, the variable-speed CMG can be used to avoid the geometric singularity that is the most serious drawback of the conventional CMG. The VSCMG also can be used as a mechanical battery to store electric energy as kinetic energy of the flywheels.

At least three single-axis CMGs are necessary for control of spacecraft attitude. However, no matter how many CMGs a spacecraft uses, gimbal motion can lead to relative orientations that produce no usable output torque along certain directions. These orientations are known as "singularities" and are related to the kinematics of robotic systems that encounter limits on the end-effector velocities due to certain joint alignments. Avoiding these singularities is naturally of great interest, and several techniques have been proposed. David Bailey and others have argued (in patents and in academic publications) that merely avoiding the "divide by zero" error that is associated with these singularities is sufficient.[1][2] Two more recent patents summarize competing approaches.[3][4] 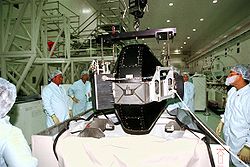 The ISS employs a total of four CMGs as primary actuating devices during normal flight mode operation. The objective of the CMG flight control system is to hold the space station at a fixed attitude relative to the surface of the Earth. In addition, it seeks a Torque Equilibrium Attitude (TEA), in which the combined torque contribution of gravity gradient, atmospheric drag, solar pressure, and geomagnetic interactions are minimized. In the presence of these continual environmental disturbances CMGs absorb momentum in an attempt to maintain the space station at a desired attitude. The CMGs may eventually saturate (absorbing momentum to the point where they can absorb no more), resulting in loss of effectiveness of the CMG array for control. Some kind of momentum management scheme (MMS) is necessary to allow the CMGs to hold a desired attitude and at the same time prevent CMG saturation. Since the CMGs are momentum-exchange devices, external control torques must be used to desaturate the CMGs, that is, bring the momentum back to nominal value. Some methods for unloading CMG momentum include the use of magnetic torques, reaction thrusters, and gravity gradient torque. For the space station, the gravity gradient torque approach is preferred because it requires no consumables or external hardware and because the gravity-gradient torque on the ISS can be very high.[5]

CMG applications and fundamental research are undertaken at several institutions.