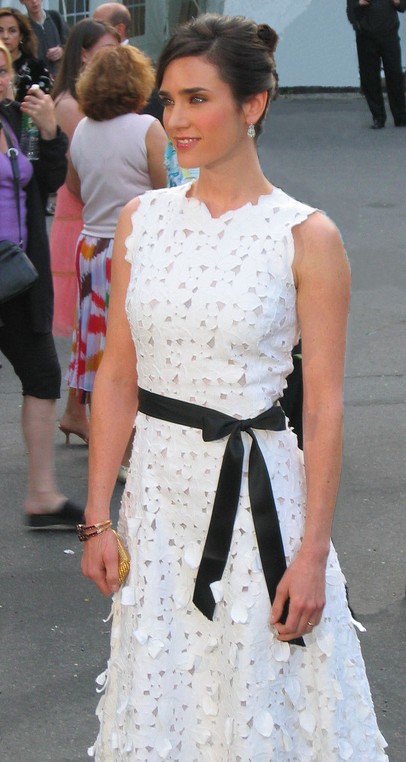 Jennifer Lynn Connelly (born December 12, 1970) is an American film actress and former child model. Although she has been working in the film industry since she was a teenager and catapulted to fame on the basis of her appearances in films like "Labyrinth" and "Career Opportunities", she did not receive wide exposure for her work until the 2000 drama "", and the 2001 "A Beautiful Mind", for which she won an for Best Supporting Actress, as well as the and awards.

Connelly was born in the , , the daughter of Eileen, an antiques dealer, and Gerard Connelly, a clothing manufacturer who worked in the garment industry. [ [http://www.filmreference.com/film/20/Jennifer-Connelly.html Jennifer Connelly Biography (1970-) ] ] Connelly's paternal grandparents were of Irish and Norwegian descent, respectively, while her maternal grandparents were ish, their families having come from and . [Stated in interview on "", 2004] Connelly was raised in Brooklyn Heights, near the , and attended St. Ann's School, except for four years the family spent living in Woodstock, . [Kalogerakis, George. [http://nymag.com/shopping/articles/02/springfashion/connelly.htm "Mind Games"] , "", February 18, 2002. Accessed November 15, 2007. "Connelly grew up mostly in Brooklyn Heights, the daughter of a clothing-manufacturer father and antiques-dealer mother. She attended Saint Ann's and started modeling when she was 10."] One of her father's friends was an executive, who suggested that she audition at a .

At the age of ten, her career started in newspaper and magazine ads, then moved to television commercials. These led to movie auditions and her first film role was as "young Deborah Gelly", a supporting role in Sergio Leone's 1984 gangster epic, "", filmed mostly in 1982 when she was eleven. [ [http://www.imdb.com/title/tt0087843/business Once Upon a Time in America (1984) - Box office / business ] ] She next starred in Italian horror-director 's "Phenomena" (1985) and in the coming-of-age movie "Seven Minutes in Heaven".

Connelly became a star on her next picture, the "Labyrinth" (1986), playing Sarah, a teenager who wishes her baby brother into the world of s ruled by goblin king Jareth (). The film disappointed at the box office, but gained a following among fantasy fans. Connelly starred in several obscure films, such as "Etoile" (1988) and "Some Girls" (1988). The -directed "" (1990) was not a success, either critically or commercially. Another film, "Career Opportunities", was more successful and is considered a teen . It and "Hot Spot" threatened to typecast her in the "sexpot" stereotype with both films emphasizing her voluptuous figure, particularly "Hot Spot", which contained her first topless scene. It would be the first of seven movies in which she appeared nude. Connelly was featured on the cover of "Esquire" in August 1991, as part of the "Women We Love" feature. [citeweb|url=http://www.esquire.com/cover-detail?year=1991&month=8|title=Esquire Cover Gallery|accessdate=2007-07-28|publisher= [http://www.esquire.com Esquire] |date=August 1991] She appeared alongside in the music video for "" in 1992. Connelly began studying English at Yale, and two years later transferred to Stanford.

The big-budget film "The Rocketeer" (1991) similarly failed to ignite Connelly's career; after its failure she took some time off from acting. The 1996 "Far Harbor" played her against type and hinted at a much broader range than she had previously shown. Connelly began to appear in smaller but well-regarded films, such as 1997's "" and 2000's "Waking the Dead". She played a collegiate in 's 1995 ensemble drama, "". The critically favored 1998 film "Dark City" afforded her the chance to work with such actors as , , and . Connelly revisited her ingenue image, although in a more understated way, for the 2000 "Pollock", in which she played 's mistress.

Connelly's big breakthrough was the 2000 film "". Connelly starred alongside and as addicts on the edge of a breakdown. The film firmly established her as a serious actress. Connelly next starred in 's film "A Beautiful Mind" (2001), essaying the role of Alicia Nash, the long-suffering wife of the brilliant, schizophrenic mathematician (played by ). The film was a critical and commercial success and earned Connelly a Golden Globe and an . Her appearance in "A Beautiful Mind" led to a featured article in "Time" magazine. [ [http://www.time.com/time/archive/preview/0,10987,1001669,00.html Jennifer Connelly] by Richard Schickel]

Connelly starred in two films in 2003: "Hulk" and "". "Hulk" was something of a box office disappointment, but afforded Connelly the chance to work with noted director . "", based on the novel by , was reminiscent of much of her independent film work of the late 1990s. Connelly appeared in the 2005 "Dark Water", which was based on a Japanese film. In 2006, Connelly appeared in two films, both of which were nominated for multiple . She played a major role in an adaptation of the novel "Little Children" alongside . Although her role as Kathy Adamson is very important in the novel, director gave her character less screen time, instead focusing on the characters played by Winslet and . She also played a journalist in "Blood Diamond" opposite . She next appeared in "" with , which was given a limited release in the fall of 2007.

Connelly will next appear alongside in the 2008 remake of the 1951 sci-fi classic "The Day The Earth Stood Still", followed by a small independent thriller with her husband , and will have a small role opposite in "He's Just Not That Into You".

She is the face of .