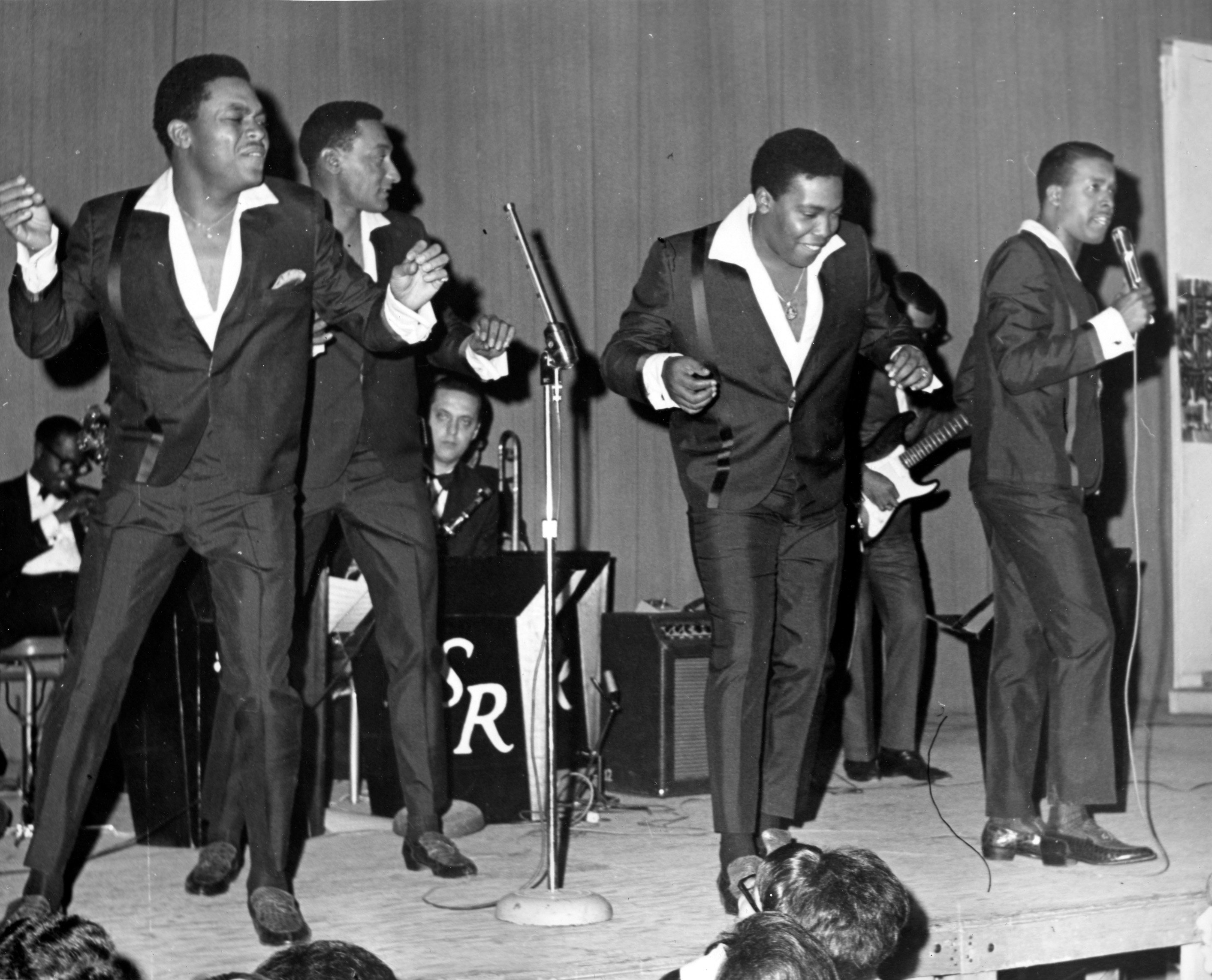 
The Four Tops are an American vocal , whose repertoire has included , , , , , , and . Founded in as The Four Aims, lead singer (a cousin of and brother of ' Joe Stubbs), and groupmates , and remained together for over four decades, finally forced to endure a lineup change when Payton died in 1997. At that time, was added to the lineup; Peoples later replaced Stubbs, who fell ill from a stroke, and assumed Peoples' spot. In July 2005, Benson died of with Payton's son Roquel replacing him. As of 2006, Fakir, McNeir, Payton and Peoples still perform together as the Four Tops.

Among a number of groups who helped define the of the 1960s, including , , , , and , the Four Tops were notable for having Stubbs, a , as their lead singer; most groups of the time were fronted by a . The group was the main male vocal group for the songwriting and production team of , who crafted for the group a stream of hit singles, including two number-one hits: "" and "". After Holland-Dozier-Holland left Motown in 1967, the Four Tops were assigned to a number of producers, primarily Frank Wilson. When Motown left Detroit in 1972 to move to , the Tops stayed in Detroit and moved over to , where they continued to have charting singles into the late-1970s. Since the 1980s, the Four Tops have recorded for, at various times, Motown, and . Today, save for "" (owned by ), controls the rights to their entire post-1963 catalog (through various mergers and acquisitions).

All four members of the group began their careers together while they were high school students in Detroit. At the insistence of their friends, Pershing High students and performed with and from Northern High at a local birthday party. The quartet decided to remain together, and christened themselves "The Four Aims". With the help of Payton's cousin Roquel Davis, The Aims signed to in 1956, changing their name to "Four Tops" to avoid confusion with .Over the next seven years, The Tops endured unsuccessful tenures at Chess, , and . Without any hit records to their name, The Tops toured frequently, developing a polished stage presence and an experienced supper club act. In 1963, , who had worked with Roquel Davis as a songwriter in the late-1950s, convinced The Tops to join the roster of his growing record company.

During their early Motown years, the Four Tops recorded standards for the company's Workshop label. In addition, they filled in time by singing backup on Motown singles such as ' "" and "".

In 1964, Motown's main songwriting/production team of created a complete instrumental track without any idea of what to do with it. They decided to craft the song as a more mainstream pop song for the Four Tops, and proceeded to create "" from the lyric-less instrumental track. Upon its mid-1964 release, "Baby I Need Your Loving" made it to #11 on the Billboard pop charts. However, the song proved to be much more popular on trend-setting radio stations in key U.S. markets; Baby I Need Your Loving was a strong top 10 hit on both in New York, and in Detroit, stations that were watched by other radio people all over the country, because these stations broke new artists and songs. After the single's success, The Tops were pulled away from their jazz material and began recording more records in the vein of "Baby I Need Your Loving."

The first follow-up single, "Without the One You Love (Life's Not Worth While)", missed both the pop and R&B Top 40 charts by only three positions. "Ask the Lonely", released early in 1965, was a Top 30 pop hit and a Top Ten R&B hit, and the from there, the Tops' fortunes began to improve.

After scoring their first #1 hit, the often-recorded and revived "", in April 1965, the Four Tops began a long series of successful hit singles. Among the first wave of these hits were the Top 10 "", "Something About You", "Shake Me, Wake Me (When It's Over)", and "Loving You is Sweeter Than Ever". Four Tops records often represented the epitome of the Motown Sound: simple distinctive melodies and rhymes, call-and-response lyrics, and the musical contributions of . Holland-Dozier-Holland wrote most of Levi Stubbs' vocals in a tenor range, near the top of his range, in order to get a sense of strained urgency in his gospel -inspired leads. In addition, H-D-H used additional background vocals from female background vocalists on many of these songs, to add a high end to the low-voiced harmony of The Tops, with "Loving You Is Sweeter Than Ever" being one of the few exceptions.

August 1966 brought the release of the Four Tops' biggest hit, and one of the most popular Motown songs ever: "", which hit #1 on the U.S. pop charts and soon became The Tops' signature song. It was almost immediately followed by the similar sounding ""; its depictions of heartbreak reflected the polar opposite of the optimism expressed in "Reach Out". It was another Top 10 hit for the Tops.

The Top 10 U.S. hit "Bernadette" centred around a man's complete obsession with his lover, continued the Four Tops' successful run in February 1967, followed by the Top 20 hits "", and "You Keep Running Away". By now, The Tops were the most successful male Motown act in the (in the United States, they were second to ), and began experimenting with more mainstream pop hits. They scored hits with their versions of 's "If I Were A Carpenter" in late 1967 and the 's "Walk Away Renée" in early 1968. These singles and the original "I'm In a Different World" were their last hits produced by Holland-Dozier-Holland, who left Motown in 1967 after disputes with Berry Gordy over royalties and ownership of company shares.

Without H-D-H, the quality of the Four Tops' output, like that of most of Motown, began to decline, and hits became less frequent. The group worked with a wide array of Motown producers during the late-1960s, including Ivy Hunter, Nickolas Ashford & Valerie Simpson, , and Johnny Bristol, without significant chart success.

Their first major hit in a long time came in the form of 1970's "", a pop Top 30/R&B Top Ten hit produced by Frank Wilson. Wilson and The Tops began working on a number of innovative tracks and albums together, echoing Whitfield's work with The Temptations. Their 1970 album "Still Waters Run Deep" was an early ancestor to the . It also served as an inspiration for 's 1971 classic album "", the title track of which was co-written by The Tops' Obie Benson.

The 1971 single "A Simple Game" featured backing vocals from members of . The song did not fare well on the U.S. charts, but reached #3 on the UK charts.

The Motown company began to change in a number of ways during the early 1970s. Older acts such as and were being slowly placed aside to focus on newer acts such as and , Rare Earth, and the now-solo . In addition, the company was slowly moving many of its operations from Detroit to , where Berry Gordy planned to break into the and industries. In 1972, it was announced that the entire company would move to Los Angeles, and that all its artists had to move as well. Many of the older Motown acts, already neglected by the label, opted to stay in Detroit, including backing band, , and the Four Tops.

The Tops departed Motown for , where they were assigned to songwriter-producers Dennis Lambert and Brian Potter, with The Tops' own Lawrence Payton also serving as a producer and arranger. "Keeper of the Castle" was their first pop Top 10 hit since "Bernadette" in 1967; follow-ups such as "Ain't No Woman (Like the One I've Got)",(another top 10 pop hit), the Top 20 "Are You Man Enough" (from the movie "Shaft In Africa"), "Sweet Understanding Love", "Midnight Flower", and "One Chain Don't Make No Prison" all hit the R&B Top Ten between 1972 and 1974. By the release of "Catfish" in 1976, the hits had dried up again, and the group disappeared into obscurity in the late-1970s. Scoring a deal with in 1980, the Four Tops made a comeback in 1981 with the #1 R&B hit "", which just missed the Billboard Pop Top 10, peaking at # 11.

By 1983, The Tops had rejoined Motown, and were featured on the company's "". One of the highlights of the show was a battle-of-the-bands between The Tops and The Temptations, patterned after similar competitions Berry Gordy had staged during the 1960s. Levi Stubbs and Temptation decided the Temptations/Tops battle would be a good one to take on the road, and both groups began a semi-regular joint tour; as of 2007, the two groups continue to play dates together.

The first of The Tops' albums under their new Motown contract was "Back Where I Belong". A whole side of the album was produced by Holland-Dozier-Holland, including the R&B Top 40 single "I Just Can't Walk Away". Only two more Tops albums would be released by Motown, 1985's "Magic" and 1986's "Hot Nights", as the group and the label began to quarrel on matters of marketing and musical direction. In 1987, the Four Tops decided to leave Motown again, this time for , buying back the masters they had recorded for an in-progress album and bringing them with them. The result was 1988's "Indestructible", the title track of which was the group's final Top 40 hit. It was also featured in the 1988 Sci-Fi cop film, "Alien Nation."

In addition to their own recordings, the Four Tops also worked in the fields of and . The group as a whole performed a song for the 1982 film "", and Levi Stubbs performed the vocals for the man-eating plant in the 1986 "Little Shop of Horrors"; and the voice of the evil Mother Brain on the Nintendo-based NBC "" from 1989 to 1991.

Since the late-1980s, the Four Tops have focused on touring and live performances, only recording one album, 1995's "Christmas Here With You", released on Motown. On , , 59-year-old Lawrence Payton died as a result of liver cancer, after singing for forty-four years with the Four Tops, who, unlike many Motown groups, never had a single lineup change until then. At first, Levi Stubbs, Obie Benson, and Duke Fakir toured as a trio called "The Tops". In 1998 they recruited former Temptation to join the act to restore the group to a quartet. By the turn of the century, Stubbs had become ill from ; Ronnie McNair was recruited to fill in the Lawrence Payton position, and Peoples stepped into Stubbs' shoes as lead singer.

The group was featured in several television specials during this time, including , and several by , including a 50th anniversary concert dedicated to the group. The concert turned out to be bittersweet; it featured a brief appearance of the wheelchair-bound Levi Stubbs, and a memorial to Lawrence Payton, announced by Obie Benson. Benson appeared on one more PBS special, and died on July 1, 2005, from . The final PBS special, titled "Motown: The Early Years", featured a message of Benson's passing following the credits. Lawrence Payton's son Roquel (real name Lawrence Payton, Jr.) replaced Benson as new bass (Roquel could be seen in the pledge break interviews of "Motown: The Early Years"). The group performed as part of the "Eat to the Beat" concert series at in in October of 2006. At Epcot, The Four Tops set list featured "Baby I Need Your Loving," "When She Was My Girl," "Ask the Lonely," "Walk Away Renee," "Reach Out I'll Be There," "Bernadette," "Standing in the Shadows of Love," and "(Sugar Pie Honey Bunch) I Can't Help Myself."

"For a detailed listing of albums and singles, see ".

Top Thirty US and UK singles

The following singles reached the top thirty of the singles charts.