The Dam Busters is a 1955 British Second World War war film starring Michael Redgrave and Richard Todd and directed by Michael Anderson. The film recreates the true story of Operation Chastise when in 1943 the RAF's 617 Squadron attacked the Möhne, Eder and Sorpe dams in Germany with Wallis's "bouncing bomb". The film was based on the books The Dam Busters (1951) by Paul Brickhill and Enemy Coast Ahead (1946) by Guy Gibson. 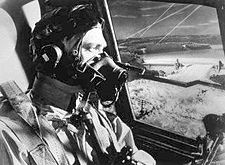 Richard Todd as Guy Gibson in The Dam Busters (1954)

The film falls into two parts. The first part involves Wallis struggling to develop a means of attacking Germany's dams in the hope of crippling German heavy industry. Working for the Ministry of Aircraft Production, as well as doing his own job at Vickers, he works feverishly to make practical his theory of a bouncing bomb which would skip over the water to avoid protective torpedo nets. When it came into contact with the dam, it would sink before exploding, making it much more destructive. Wallis calculates that the aircraft will have to fly extremely low (150 feet) to enable the bombs to skip over the water correctly, but when he takes his conclusions to the Ministry he is told that lack of production capacity means they cannot go ahead with his proposals.

Angry and frustrated, Wallis secures an interview with Sir Arthur "Bomber" Harris (played by Basil Sydney), the head of RAF Bomber Command, who at first is reluctant to take the idea seriously. But he is eventually convinced and takes the idea to the Prime Minister, who authorises the project.

The second part of the film involves Bomber Command forming a special squadron of Lancaster bombers, 617 Squadron, to be commanded by Wing Commander Guy Gibson. He recruits experienced crews, especially those with low-altitude flight experience. While they train for the mission, Wallis continues his development of the bomb but has problems, such as the bomb breaking apart upon hitting the water. This requires the drop altitude to be reduced to 60 feet. With only a few weeks to go, he succeeds in fixing the problems and the mission can go ahead.

The bombers attack the dams. Several Lancasters and their crews are lost, but the overall mission succeeds and two dams are breached. The film's reflective last minutes convey the poignant mix of emotions felt by the characters – triumph over striking a successful blow against the enemy's industrial base is greatly tempered by the sobering knowledge that many died in the process of delivering it. 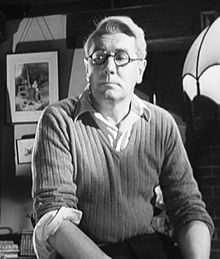 Michael Redgrave as Barnes Wallis in The Dam Busters (1954)

The flight sequences of the film were shot using real Avro Lancaster bombers supplied by the RAF. The aircraft, four of the final production B.VIIs, had to be taken out of storage and specially modified by removing the mid-upper gun turrets to mimic 617 Squadron's special aircraft, and cost £130 per hour to run, which amounted to a tenth of the film's costs. A number of Avro Lincoln bombers were also used as "set dressing."[2] (An American cut was made more dramatic by depicting an aircraft flying into a hill and exploding. This version used stock footage from Warner Brothers of a B-17 Flying Fortress, not a Lancaster.)

The Upper Derwent Valley in Derbyshire (the test area for the real raids) doubled as the Ruhr valley for the film. The scene where the Dutch coast is crossed was filmed between Boston, Lincolnshire and King's Lynn, and other coastal scenes near Skegness. Additional aerial footage was shot above Windermere, in the Lake District.

An Avro Lancaster B.VII modified for the film with cut-out bomb bay and mock bouncing bomb demonstrating to a crowd at Coventry Airport in 1954

While RAF Scampton, where the real raid launched, was used for some scenes, the principal airfield used for ground location shooting was RAF Hemswell, a few miles north and still an operational RAF station at the time of filming. Guy Gibson had been based at Hemswell in his final posting and the airfield had been an operational Avro Lancaster base during the war. At the time filming took place it was then home to No. 109 Squadron and No. 139 Squadron RAF, who were both operating English Electric Canberras on electronic counter measures and nuclear air sampling missions over hydrogen bomb test sites in the Pacific and Australia. However, part of the RAF's fleet of ageing Avro Lincolns had been mothballed at Hemswell prior to being broken up and several of these static aircraft appeared in background shots during filming, doubling for additional No 617 Squadron Lancasters. The station headquarters building still stands on what is now an industrial estate and is named Gibson House. The four wartime hangars also still stand, little changed in external appearance since the war.

Serving RAF pilots from both squadrons based at Hemswell took turns flying the Lancasters during filming and found the close formation and low level flying around Derwentwater and Windermere exhilarating and a welcome change from their normal high level solo Canberra sorties.

Three of the four Lancaster bombers used in the film had also appeared in the Dirk Bogarde film Appointment in London two years earlier.[3] 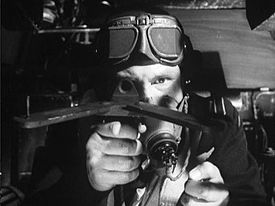 A bomb aimer prepares to drop his bouncing bomb using an improvised device to determine the correct distance from the dam.

The film is accurate historically with only a few minor exceptions, mostly derived from Paul Brickhill's book, which itself was written when much detail about the raid was not yet in the public domain:

The main theme music, the Dambusters March by Eric Coates, is for many synonymous with the film, as well as with the exploit itself. As a reminder of British success, it remains a favourite military band item at flypasts and can be heard at football games during England matches. One version released featured dialogue extracts from the film's (the bombing run).

Work on a remake of The Dam Busters, produced by Peter Jackson and directed by first time director Christian Rivers, began production in 2008. Jackson said in the mid-1990s that he became interested in remaking the 1954 film, but found that the rights had been bought by Mel Gibson. In 2004, Jackson was contacted by his agent, who said Gibson had dropped the rights. The rights were purchased by Sir David Frost, from the Brickhill family in 2005.[5] Stephen Fry is writing the script of the film.[6] It will be distributed by Universal Pictures and StudioCanal.[7] Filming was planned to commence in early 2009, on a budget of USD 40 million,[8] although no project-specific filming had begun as of May 2009.[9]

Weta Workshop is making the models and special effects for the film and have made 10 life size Lancaster bombers.[10]

The last living pilot of the strike team, Les Munro, joined the production crew in Masterton as technical adviser. Jackson will also use newly declassified War Office documents to ensure the authenticity of the film.[11]

The attack on the Death Star in the climax of the film Star Wars Episode IV: A New Hope is heavily influenced by the climactic sequence of The Dam Busters. In the former film rebel pilots have to fly through a trench while evading enemy fire and fire a proton torpedo at a precise distance from the target in order to destroy the entire base with a single explosion; if one run fails another run must be made by a different pilot. In addition to the similarity of the scenes, some of the dialogue is nearly identical in the two films. Star Wars also ends with an Elgarian-style march, like The Dam Busters.[12]

In the 1982 film Pink Floyd The Wall, scenes from The Dam Busters can be seen and heard playing on a television set several times during the film.

Two television advertisements were made for a brand of beer, Carling Black Label, which played on the theme of The Dam Busters. Both were made before the English football team broke a 35-year losing streak against Germany. The first showed a German guard on top of a dam catching a bouncing bomb as if he were a goalkeeper. The second showed a British tourist throwing a Union Flag towel which skipped off the water like a bouncing bomb to reserve a pool-side seat before the German tourists could reserve them with their towels. Both actions were followed by the comment "I bet he drinks Carling Black Label".[13]

In 1999, British television network ITV broadcast a censored version of the film, removing all utterances of "Nigger" (the real name of the unit's mascot, a black labrador). ITV blamed regional broadcaster London Weekend Television, which in turn alleged that a junior staff member had been responsible for the unauthorised cuts. When ITV again showed a censored version in June 2001, it was condemned by Index on Censorship as "unnecessary and ridiculous" and because the edits introduced continuity errors.[14]

In 2004, the magazine Total Film named The Dam Busters the 43rd greatest British film of all time. Although it has been praised as one of the greatest war films of all time it focuses on the technicalities of destroying the enemy's dams, rather than the enemy himself. The film does not attempt to gloss over the losses sustained amongst the airmen nor the devastation caused by the flooding of the enemy countryside.

The British Channel 4 screened the censored American version in July 2007, in which the dialogue was dubbed so as to call the dog Trigger, this screening taking place just after the planned remake was announced. For the remake, Peter Jackson has said no decision has been made on the dog's name, but is in a "no-win, damned-if-you-do-and-damned-if-you-don't scenario", as changing the name could be seen as too much political correctness, while not changing the name could offend people.[15] Further, executive producer Sir David Frost was quoted in The Independent as stating: "Guy sometimes used to call his dog Nigsy, so I think that's what we will call it. Stephen has been coming up with other names, but this is the one I want."[16] In June 2011, Stephen Fry mentioned in an interview that the dog would be called Digger in the remake to avoid offending modern audiences. [N 1] In September 2007, as part of the BBC Summer of British Film series, The Dam Busters was shown at selected cinemas across the UK in its uncut format.

On 16 May 2008, a commemoration of the 65th anniversary was held at Derwent Reservoir, including a flypast by a Lancaster, Spitfire and Hurricane. The event was attended by Richard Todd and Les Munro, the only pilot from the original raid still living, as well as Mary Stopes-Roe, the elder daughter of Sir Barnes Wallis.