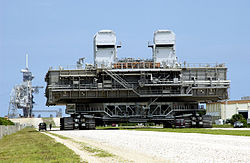 An MLP being carried by a Crawler-Transporter.

The Mobile Launcher Platform or MLP is one of three two-story structures used by NASA to support the Space Shuttle stack during its transportation from the Vehicle Assembly Building (VAB) to Launch Pad 39-A at the Kennedy Space Center as well as serve as the vehicle's launch platform. NASA's three MLPs were originally constructed for the Apollo Program to launch the Saturn V rockets in the 1960s and 1970s, and have remained in service to this day, with substantial alterations.

Originally designated the "Mobile Launcher",[2] the MLP was designed as part of NASA's strategy for vertical assembly and transport of space vehicles. Vertical assembly allows the preparation of the spacecraft in a ready-for-launch position, and avoids the additional step of lifting or craning a horizontally-assembled vehicle onto the launchpad (as the engineers of the Soviet space program chose to do).

The Mobile Launcher Platform is set atop six legs inside the massive Vehicle Assembly building. The Solid Rocket Boosters are mounted on top of the MLP. The External Tank is then lowered between the two boosters and attached to them. After that, the Orbiter is lowered into position and attached to the External Tank. The Crawler-Transporter then carries the combined platform and vehicle to the launch site, and deposits them there together. Once the launch has been completed, the Crawler-Transporter retrieves the empty MLP from the pad to be readied for its next use. 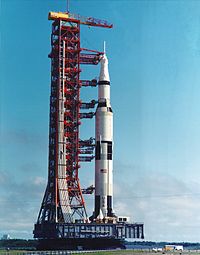 The Saturn V "stack" for the Apollo 11 moon landing mission moves up the ramp toward its launch site on the Mobile Launcher, carried by the Crawler-Transporter.

The MLP was originally constructed for the use of transporting and launching the Saturn V rocket for the Apollo program lunar landing missions of the 1960s and 1970s. Each MLP originally had a single exhaust vent for the Saturn V's motors. The MLPs also featured the distinctive 400-foot (120 m) launch umbilical tower (LUT) with arms that permitted the servicing of the rocket on the launch pad. The arms swung away from the Saturn V at launch. For Skylab and Apollo-Soyuz, MLP #1 was modified with a so-called "milkstool" pedestal that allowed the shorter Saturn IB rocket to use the Saturn V tower and service arms, and Saturn V Ground Support Equipment (GSE) was removed or de-activated and Saturn IB GSE equipment was installed. 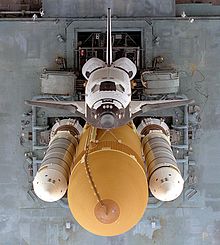 Space Shuttle Atlantis atop the Mobile Launcher Platform and crawler-transporter.

Water is released onto the mobile launcher platform on Launch Pad 39A at the start of a rare sound suppression system test in 2004. During launch, 300,000 US gallons (1,100 m3) are poured onto the pad in only 41 seconds.

In the post-Apollo years, the umbilical towers from Mobile Launchers 2 and 3 were removed. Portions of these tower structures were erected at the two Space Shuttle (or STS, for Space Transport System) launch pads, Pads 39 A and B. These permanent structures are now known as the "Fixed Service Structure" or in NASA's language of acronyms, FSS. The umbilical tower from Mobile Launcher 1 (which was the platform used for the most significant Apollo Missions) was taken apart and stored in the Kennedy Space Center's industrial area. Efforts to preserve it in the 1990s failed, however, for lack of funding and it was scrapped.

In addition to removal of the umbilical towers, each Shuttle-era MLP was extensively reconfigured with the addition of two Tail Service Masts, one on either side of the Main Engine exhaust vent. These 31-foot (9.4 m) masts contain the feed lines through which liquid hydrogen (LH2) and liquid oxygen (LOX) are loaded into the shuttle's external fuel tank, as well as electrical hookups and flares that are used to burn off any ambient hydrogen vapors at the launch site immediately prior to Main Engine start.

The Space Shuttle Main Engine (SSME) vents its exhaust through the original opening used for the Saturn rocket exhaust. Two additional holes were added to vent exhaust from the Solid Rocket Boosters that flank the external fuel tank.

The Space Shuttle assembly is held to the MLP through the use of eight attach posts, also called "hold-down bolts", four on the aft skirt of each Solid Rocket Booster. Immediately before SRB ignition, frangible nuts attached to the top of these bolts are detonated, releasing the assembly from the platform.

When NASA began launching shuttle missions, it became clear that the MLP might inadvertently pose a danger to the crew or the vehicle: massive acoustic shock waves and rocket exhaust can bounce off the platform and hit the shuttle as it lifts off. This was true for the Saturn V launches as well, but there was less risk because the Apollo Modules, atop the 363-foot (111 m) stack, were much farther away from the engines. Because the shuttle is about half the height of the Saturn, the crew-cabin and payload bay are much closer to the platform and much more vulnerable to the tremendous forces bouncing back off the MLP - on the first mission, STS-1, the shock waves damaged many of the protective thermal tiles.

NASA's solution to this danger is to cushion the MLP at every launch with a flood of flowing water. Starting 6.6 seconds before engine ignition, a 300,000-US-gallon (1,100 m3) water tank at the launch site begins dumping water down a pipeline and into the exhaust vents of the MLP. Next, six 12-foot (3.7 m)-high towers known as "rainbirds" begin to spray water over the MLP and into the flame deflector trenches below it. The water absorbs some of the bruising forces of the acoustic waves, and discourages fires that might be caused by the rocket exhaust. This water-dumping mechanism, known as the Sound Suppression System, empties the launch pad tank in around 41 seconds[3]. The giant white clouds that billow around the shuttle at each launch are not smoke, but water vapor generated as the rocket exhaust boils away huge quantities of water.[4] The suppression system reduces the acoustic sound level to approx 142 dB. 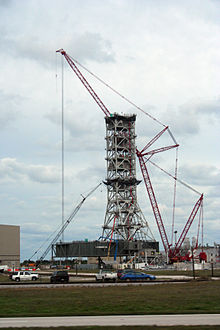 With the retirement of the Shuttle in 2011 and its planned replacement Orion spacecraft and its Ares I launcher in the design and test phase, NASA is converting LC-39B from Shuttle operations to support Ares I launches. The Ares I-X suborbital mission (using a five-segment solid-fueled first stage with four active and one dummy segments and a boilerplate second stage and spacecraft) utilized MLP 1, the same MLP used for Apollo 11, to support the stacking and launch operations. The cancelled Ares I-Y (using a full five-segment first stage, production second stage, and boilerplate Orion spacecraft with an active Launch Abort System) would have used the same MLP.

Starting with Orion 1, NASA would utilize one of three new MLPs, designed by ASRC Aerospace (under the University-Affiliated Spaceport Technology Development Contract [USTDC]) that will support the "stick-like" Orion-Ares I configuration, its launch umbilical tower, and escape equipment. At a weight of about 9.5 million pounds (4,300 metric tons), the new MLPs would allow NASA to utilize the Crawler-Transporter in its current configuration.

The existing Apollo and Shuttle MLPs, after the retirement of the Shuttle, will be overhauled and modified, along with LC-39A, for support of the planned Ares V rocket, the Altair spacecraft, and its launch umbilical tower. The three exhaust ports, in a "triangular" arrangement (due to the "piggyback" nature of the Shuttle stack) would be modified for the in-line nature of the Ares V, and the compartments would be strengthened to support the heavier weight of the launch vehicle. At the same time, NASA would either modify the existing Crawler-Transporters, or even construct replacements, that will allow them to carry both an Orion-Ares I and Altair-Ares V stack from the Vehicle Assembly Building to their respective launch pads if lunar landing missions commence after 2018.[citation needed]