The Military Macaw (Ara militaris) is a large parrot and a medium-sized member of the macaw genus. Though considered vulnerable as a wild species, it is still commonly found in the pet trade industry. A predominantly green bird, it is found in the forests of Mexico and South America.

There are three subspecies, A. m. militaris, A. m. mexicana, and A. m. boliviana. The differences between the subspecies are slight and pertain to minor variations in color and size, generally 70–80 cm, with the militaris subspecies being the smallest and the mexicana being the largest.

The Military Macaw appears superficially similar to, and may easily be confused with the somewhat larger Great Green Macaw.

Military Macaws live in large flocks and can live about 50–60 years in the wild. They can often be heard long before they are seen. They are a very noisy bird making a variety of loud cracking and shrieking sounds, including a loud kraa-aak.

The Military Macaw's diet consists of seeds, fruits, nuts, berries, and other vegetation found on treetops in their forests. Their beaks are well adapted for eating various seeds and nuts as they have the ability to break open the hardest of shells with relative ease.

Military Macaws will leave their roosts in flocks around dawn and head to their feeding areas. They will also visit heaps of clay known as “macaw licks”. These clay licks are found along riverbanks or sometimes in the interior of the Amazon rainforest. Macaws will flock to there to feed on these clay deposits, which appear to detoxify the poisons found in the seeds and vegetation of the rest of their diet. It is also thought that this clay provides the macaws with dietary salt not available in their normal diet.

The three subspecies will breed at different times. However this probably has more to do with the geographical region they are residing in than anything else. Breeding in the militaris occurs from January to March. The mexicana breeds from April to July and the boliviana breeds in November and December. Military Macaws are monogamous and remain with their mates for life. As they fly in large flocks the mates fly together. They will also be found flying in pairs in their feeding and roosting/nesting areas. Females will lay one to two eggs which only she will incubate for a period of approximately 26 days. Military Macaws will reach sexual maturity in two to four years. 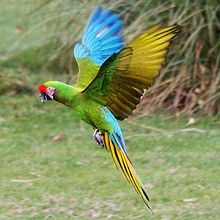 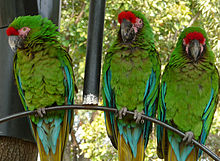 The Military Macaw inhabits arid woodlands and subtropical forests. They typically live at elevations of 600 to 2600 m, higher in the mountains than most macaws ever range. However, these macaws may seasonally fly down to lowlands, where they are likely in humid forests and thorny woodlands.[2] They will nest in the tops of trees and more often in cliff-faces over 600 ft. (200 m) above the ground. The three subspecies of the Military Macaw are distinguished geographically. The Ara m. militaris are often found in areas of Peru, Ecuador, Colombia, and Venezuela. The Ara m. mexicana occupy areas in Mexico and the Ara m. boliviana live in Bolivia and Argentina.

The population and distribution of the Military Macaw has been decreasing over the past fifty years. The abundance of the Military Macaw has now decreased to less than 10,000 globally. This decrease is mostly due to deforestation and the capturing of wild birds for the pet trade industry. Military Macaws are now listed as Vulnerable on the 2006 IUCN Red List Category. They are also listed as CITES (Convention on International Trade in Endangered Species of Wild Fauna and Flora) Appendix I, which protects the birds from being captured for trade.

When considering a Military Macaw as a pet, it is very important to verify the bird was bred in captivity. The U.S. Wild Bird Act forbids the commercial import of any bird listed by CITES. Though it is not among the most popular parrot species sought as a pet, the military macaw is often bred in captivity for trade and can be purchased for $800.00 to $1,000. The most common of the subspecies kept as pets is A. m. mexicana and they can live for more than 60 years in captivity.

Like most macaws, Military Macaws will be even tempered although sometimes they may be difficult and cranky. With proper training they can become a very tame and friendly pet. They are a very social bird who are playful and inquisitive and enjoy human interaction. Though they can be a noisy bird, they are very intelligent and have the ability to mimic human speech. They are considered to be a good choice for a show bird.

It is important to have the proper housing for your pet. The Military Macaw requires a minimum cage size of 36x48x60. A flight cage and plenty of time outside the cage is also highly suggested as the Military needs plenty of room to stretch and exercise its wings. Also, be sure to provide a variety of perch sizes for your bird to exercise its feet. Macaws also like to gnaw and chew so provide plenty of toys for your bird to exercise its beak. Make sure to clean and disinfect the cage regularly and replace all damaged toys and perches regularly.

It is highly suggested to feed your Macaw a specialized pellet diet with seeds in moderation. Fresh fruits and vegetables such as, apples, berries, grapes, carrots, broccoli, and various greens leafy vegetables should be given to your macaw and replaced at least every 24 hours. Also, it is recommended to regularly provide your pet with fresh clean water. Proper bathing and cleaning is also very important for your pet macaw. Provide clean water for bathing. Remove and replace it with fresh clean water when the bird is finished. You may also shower or mist your bird. This is often enjoyed and is usually a fun alternative for your pet and will often generate a playful attitude in the bird. Then allow the bird to sun-dry if possible.

Some common illnesses in pet Military Macaws include chlamydiosis, diarrhea, feather-plucking, and Proventricular Dilatation Disease. Swelling in the beak or eyes, eye or nasal discharge, loss of appetite, coughing, or lethargic activity are all warning signs of an ill pet.