NBC Radio City Studios is the name given to radio and television studio complexes in New York's Rockefeller Center, San Francisco, and the former radio-TV complex located at the northeast corner of Sunset Boulevard and Vine Street in Hollywood, California. 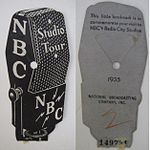 Die-cut bookmark given to those touring the Radio City Studios, 1935.

Prior to occupying its location at Rockefeller Center, NBC had occupied upper floors of a building at 711 Fifth Avenue developed by Floyd Brown, himself an architect.[1] Home of NBC from its construction in 1927,[1] the broadcast company occupied floor designed by Raymond Hood — who designed the tenant's multiple studios as "a Gothic church, the Roman forum, a Louis XIV room and, in a space devoted to jazz, something “wildly futuristic, with plenty of color in bizarre designs.”[1] NBC outgrew 711 Fifth Avenue in 1933.[1]

The Radio City name was first given to the NBC radio facilities located the in RCA Building at 30 Rockefeller Plaza in Rockefeller Center. NBC's studios have occupied most of the lower floors of the building (now called the GE Building) since 1933. The Radio City name also inspired the name for Radio City Music Hall, the movie and concert venue located in another building just northwest of the GE Building in Rockefeller Center. The original radio studio suites were eventually converted to TV use.

The largest and most prominent NBC studio at Radio City is Studio 8-H. 8-H was designed for the live radio concerts of the NBC Symphony Orchestra under Arturo Toscanini and opened in 1937. In 1950 it was converted into a television studio and since 1975 it has been the home of NBC's live comedy program Saturday Night Live (SNL).

While NBC has divested itself of its company-owned radio holdings, television shows like SNL and Late Night with Jimmy Fallon (taped in Studio 6-B) continue to bear the Radio City label. Among other production suites in the New York Radio City Studios are Studio 3-C, housing NBC Nightly News, Studio 3-B, housing Dateline NBC; and Studio 3-K (NBC Sports). 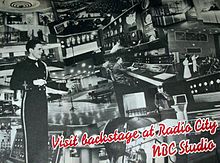 The Radio City studio from which The Tonight Show was broadcast during the Jack Paar and early Johnny Carson years (it first originated at the Hudson Theatre, on 44th Street) — Studio 6-B — later served as WNBC's main news studio until November 2008 [2], when it was converted into the home for Late Night with Jimmy Fallon. News 4 New York then moved to Studio 7-E.

In 1926, NBC launched a 3rd radio network, aside from it's Red and Blue. The Orange network served the West Coast and in 1927 opened it's headquarters in San Francisco at the St. Francis hotel until moving to the 22nd floor of the Hunter-Dolan building at 111 Sutter.

In the 1930's it became clear that NBC West Coast needed a larger facility. They signed a contract for a new Radio City to be constructed at the corner of Taylor and O'Farrell. But by the time the building was finished in 1942, NBC West Coast had already moved to Los Angeles. The new San Francisco building continued to operate until 1967 when it's long-term lease expired. The building went on to house television stations before being turned into offices in the 1990s.

Radio City West was located at Sunset Boulevard and Vine Street in Los Angeles until it was replaced by a bank in the mid-1960s.

The West Coast Radio City opened in 1938 and served as headquarters to the NBC Radio Networks' (Red and Blue) West Coast operations. It served as a replacement for NBC's radio broadcast center in San Francisco, which had been around since the network's formation in 1927. Since NBC never owned a radio station in Los Angeles, the network's West Coast programming originated from its San Francisco station (KPO-AM, which later became KNBC-AM, and is now KNBR).

The architect for the distinctive Streamline Moderne building at Hollywood and Vine was John C. Austin.[3]

In January 1949, NBC launched its newest television station for Los Angeles, KNBH (Channel 4; now KNBC) from Radio City. However, as television production was increasing for NBC, the network and its then-parent RCA decided to build a television studio, nicknamed NBC Color City, that would be exclusively equipped for color broadcasting. For many of the same reasons why CBS eventually built Television City in the early 1950s, the television facilities at Radio City gradually became too small for NBC to produce its television broadcasts.

The newly-christened NBC Color City Studios opened in March 1955, as the first television studio designed specially for the origination of color television broadcasting, although their rivals, ABC and CBS would gradually add color broadcasting to their studio facilities in the later years.

KNBC moved to a new building at NBC Studios in Burbank in 1962. In 1964, the West Coast Radio City building was demolished, as NBC moved more of their West Coast television operations to the Burbank facility. The site is now occupied by a bank.