Christian Peacemaker Teams (CPT) is an international organization set up to support teams of peace workers in conflict areas around the world. These teams believe that they can lower the levels of violence through nonviolent direct action, human rights documentation, and nonviolence training. CPT sums their work up as "...committed to reducing violence by getting in the way ". CPT has a full-time corps of over 30 activists who currently work in Colombia, Iraq, the West Bank, the United States–Mexico border, and Kenora, Ontario, Canada. These teams are supported by over 150 reservists who spend two weeks to two months a year on location.

CPT has its roots in the historic peace churches of North America, and its four supporting denominations are the Mennonite Church USA, Mennonite Church Canada, Church of the Brethren, and Friends United Meeting. It is also sponsored by the several Christian groups: "Every Church a Peace Church", "On Earth Peace", "Presbyterian Peace Fellowship", "Baptist Peace Fellowship of North America", and the "Congregation of St. Basil. In conflict areas it works in partnership with Jewish, Muslim and secular peace organizations, such as the International Solidarity Movement and Peace Brigades International. Another component of CPT's work is to engage "...congregations, meetings and support groups at home to play a key advocacy role with policy makers."[1]

Although it is a Christian-based organization, CPT does not engage in any type of missionary activity. Their website states "While CPTers have chosen to follow Jesus Christ, they do not proselytize."[2] This has raised the question of what distinguishes them from similar "secular", organizations;

"All the groups resemble one another other in that they all work to stop violence, but according to CPT's Web site, it has an advantage over secular groups: "In Muslim areas, the Christian nature of CPT helps to create confidence because of a shared sense of monotheism." The group does not believe that its Christianity might also put it at a dangerous disadvantage in areas of the world where religious tensions run high."[3]

Their website also states that Corp members are Christians, there is not faith requirement for members of CPT's short-term delegations.[4]. For example one of the CPT delegates who was held hostage in Iraq, Harmeet Singh Sooden, is a Sikh.

The Mennonite Church USA Archives is the repository of the official records of Christian Peacemaker Teams. 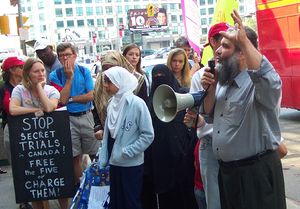 A 2004 protest by CPT outside the Toronto office of the Canadian Security Intelligence Service (CSIS), protesting the detention of non-citizens under security certificates.

The inspiration for the group came from Ron Sider at the Mennonite World Conference in 1984. At it, Sider criticized Mennonites and Brethren in Christ for reducing their peace witness to simple conscientious objection:

Unless we Mennonites and Brethren in Christ are ready to start to die by the thousands in dramatic vigorous new exploits for peace and justice, we should sadly confess that we really never meant what we said.... Unless comfortable North American and European Mennonites and Brethren in Christ are prepared to risk injury and death in nonviolent opposition to the injustice our societies foster and assist in Central America, the Philippines, and South Africa, we dare never whisper another word about pacifism to our sisters and brothers in those desperate lands.... Unless we are prepared to pay the cost of peacemaking, we have no right to claim the label or preach the message.[5]

After a series of meetings, Gene Stoltzfus was hired as the first staff person for the new organization in 1988. Over the next few years CPT trainings and conferences explored various models for international peacemaking. In 1990, just before the Gulf War, CPT sent a team of 13 to Iraq for 10 days. This delegation proved to be the first of a number the group sent its first delegations to Haiti, Iraq, and the West Bank.

CPT has operated in Iraq since October 2002. Since the 2003 invasion of Iraq, they have worked with and advocated for families of people detained by the U.S. Military and collected stories of detainee abuse. In January 2004 they released a report documenting routine abuse of Iraqi prisoners held by Coalition Provisional Authority, well before the photographs of Abu Ghraib prisoners brought international attention to the issue.[6]

On 26 November 2005, four human rights workers associated with CPT were kidnapped in Baghdad:

The four had planned to visit the Muslim Clerics Association, an influential group of Sunni religious leaders formed in 2003 after the collapse of Saddam Hussein's regime, and were about 100 metres from the entrance to a mosque where the meeting was to take place when they were abducted. Their captors are a previously unknown group, the Swords of Righteousness Brigade. The hostages were shown on a video broadcast released worldwide on 29 November by Arab satellite channel Al Jazeera. The captors branded their hostages as spies posing as Christian peace activists. The captors threatened to kill the hostages unless the US freed all Iraqi prisoners held in the US and Iraq.

On March 23, 2006, the three remaining hostages were rescued from a house near the town of Mishahda by a multinational force. None of the kidnappers were found in the house at the time. The Telegraph (UK) reported that "A deal had been struck with a man detained the previous night who was one of the leaders of the kidnappers. He was allowed a telephone call to warn his henchmen to leave the kidnap house. When the troops moved in and found the prisoners alive, they also let him go as promised."[8]

The rescue force was led by elements of 'Task Force Black' - a multinational counter-kidnap unit consisting of British, American and Canadian JTF2 special forces. They were supported by 'Task Force Maroon', a support unit made up of British Paras and marines.[9] The Royal Canadian Mounted Police and Canadian Security Intelligence Service were also involved.[10]

The three surviving hostages were in good medical condition. While captive, they had been allowed to exercise and Kember had received medication he needs.[11]

Although happy that the hostages were freed, CPT placed the responsibility for the kidnapping on the coalition itself: "We believe that the illegal occupation of Iraq by Multinational Forces is the root cause of the insecurity which led to this kidnapping and so much pain and suffering in Iraq." CPT initially made no mention of appreciation to coalition forces for the rescue in its statement, but did so in a later addenda after considerable media attention.[12] It was reported that the CPT had not cooperated with the SAS officials who coordinated the rescue. CPT co-director Doug Pritchard stated that they did not want a "military raid" to occur and preferred to work with diplomats.[13]

CPT has had a team based in Barrancabermeja, Colombia since 2001. The focus of their work has been accompanying a number of communities along the Opon river, a tributary of the Magdalena River. The farmers and fishers from these communities displaced themselves in 2000 due to heavy fighting in 2000 between the United Self-Defense Forces of Colombia (AUC) and the Revolutionary Armed Forces of Colombia (FARC). Since the community members returned to their homes in 2001, the team has had a nearly daily presence in the area to support the people, work to prevent intimidation by both AUC and FARC and document human rights abuses if they occur. The team also works with Colombian women's groups and human rights groups based in Barrancabermeja in an effort to reduce threats and violent acts carried out by the AUC in the city.[14]

CPT has, in the past, also been involved in Chiapas, Mexico, where violence had erupted between the Zapatista Army of National Liberation and the Mexican government. CPT's long-term presence began in June 1998.[15] In Chiapas, CPT partnered with a Christian civil society group called Las Abejas (the Bees) that shares a commitment to pacifism. Their joint activities included going to the bases of the Mexican military to pray.[16]

Work in the Palestinian territories

CPT has two teams in the Palestinian territories, one in Hebron and one in At-tuwani. Part of their daily routines includes school patrol, and monitoring settler violence and soldier home invasions. The teams also work against home demolitions. The CPT says the Israeli occupation is "violent", and that reconciliation between Palestinians and Israelis can only flourish when the occupation ends.[17]

In 2004, two CPT members, Kim Lamberty and Chris Brown in At-Tuwani were severely injured when Israeli settlers attacked them as they were walking children to school.[18] A few days later, the team, along with Operation Dove and Amnesty International members were again attacked. In response to these attacks, the Israeli Knesset Committee for Children's Rights initiated an order to have soldiers escort the Palestinian children to school in At-Tuwani.[19] However, CPT's report records that as of 10 November 2006, settlers had attacked or harassed the schoolchildren 40 times, in spite of the order by the Israeli Knesset Committee for Children's Rights to protect the children.

CPT has however condemned Palestinian violence against Israeli civilians. For example, when Egged bus #18 was bombed two Sundays in a row, CPTer Kathy Kern publicized the fact that she would ride the bus the following Sunday in protest.[citation needed]