The Culture of Peru was shaped by the relationship between Hispanic and Amerindian cultures. The ethnic diversity and rugged geography of Peru allowed diverse traditions and customs to coexist. The coastal European influenced Peru has passed through various intellectual stages - from colonial Hispanic culture to European Romanticism after independence. The early 20th century brought “indigenismo”, expressed in a new awareness of Indian culture. Since World War II, Peruvian writers, artists, and intellectuals such as César Vallejo and José María Arguedas have participated in worldwide intellectual and artistic movements.

Peruvian literature has its roots in the oral traditions of pre-Columbian Los Comentarios Reales de los Incas, published in 1609.

After independence, the monarchy wrote a book that spoke to all of the people. Costumbrism and Romanticism became the most common literary genres, as exemplified in the works of Ricardo Palma.[1] In the early 20th century, the Indigenismo movement produced such writers as Ciro Alegría,[2] José María Arguedas,[2] and César Vallejo.[3] José Carlos Mariátegui's essays in the 1920s were a turning-point in the political and economic analysis of Peruvian history.[4]

During the second half of the century, Peruvian literature became more widely known because of authors such as Mario Vargas Llosa, a leading member of the Latin American Boom.[5]

Peruvian architecture is a conjunction of European styles exposed to the influence of indigenous imagery. Two of the most well-known examples of the Early Colonial period are the Cathedral and the church of Santa Clara of Cuzco. After this period, the mestization reached its richer expression in the Baroque. Some examples of this Baroque period are the convent of San Francisco de Lima, the church of the Compañía and the facade of the University of Cuzco and, overall, the churches of San Agustín and Santa Rosa of Arequipa.

The independence war left a creative emptiness that was filled by the Neoclassicism of the French. The 20th century was characterized by the eclectic architecture, which has been in stark opposition to constructive functionalism. Its most considerable example is San Martin Plaza in Lima.

A Peruvian sling made of alpaca hair

Peruvian music is an amalgamation of sounds and styles drawing on the Peru's Andean musical roots and Spanish musical influences.

Popular celebrations are the product of every town’s traditions and legends. These celebrations include music, dances, meals and typical drinks. In addition to the religious celebrations like Christmas, Corpus Christi there are others that express the syncretism of the indigenous beliefs with the Christians’. An example is the Marinera which is one of the main dances found in Peru. Many families find it fascinating to watch a performance. They also have a guinea pig festival each year. 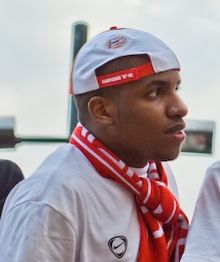 Women's Volleyball is another popular Sport in Peru (Silver medal in Seoul 1988 Olympic Games, Runners- up in World Championship in 1982 and 12 times South American Champion).

Rugby union in Peru is a minor but growing Sport. 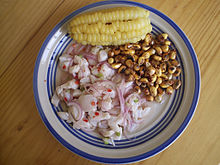 Ceviche, the most typical dish in Peru

Peru has a varied cuisine with ingredients like maize, tomato, potatoes, uchu or Ají (Capsicum pubescens), oca, ulluco, avocado, fruits like chirimoya, lúcuma and pineapple, and animals like taruca (Hippocamelus antisensis), llama and guinea pig (called cuy). The combination of Inca and Spanish culinary traditions, resulted in new meals and ways of preparing them. The arrival of Africans and Chinese immigrants in the 19th century also resulted in the development of Creole cuisine in the city of Lima, where the vast majority of these immigrants settled.

Some typical Peruvian dishes are ceviche (fish and shellfish marinated in citrus juice), the chupe de camarones (a soup made of shrimp (Cryphiops caementarius)), anticuchos (cow's heart roasted en brochette), the olluco con charqui (a casserole dish made of ulluco and charqui), the Andean pachamanca (meats, tubers and broad beans cooked in a stone oven), the lomo saltado (meat fried lightly with tomato and onion, served with french fries and rice) that has a Chinese influence, and the picante de cuy (a casserole dish made of fried guinea pig with some spices). Peruvian food can be accompanied by typical drinks like the chicha de jora (a chicha made of tender corn dried by the sun). There are also chichas made of purple corn or peanut.