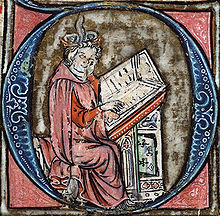 Jacob van Maerlant (born between 1230-1240 near Bruges - died c. 1288-1300 in Damme) was the greatest Flemish poet of the thirteenth century and one of the most important Middle Dutch authors during the Middle Ages.[1]

He was sacristan of Maerlant, in the island of Oostvoorne, where he lived for some time employed as a sexton, whence his surname "de Coster". Later he resided at Damme, near Bruges, where, according to tradition, he held the position of town-clerk.

His early works are Middle Dutch translations of French romances. Jacob's most serious work in the field of romance was his Historie van Troyen (c. 1264), a poem of some forty thousand lines, translated and amplified from the Roman de Troie of Benoît de Sainte-Maure.

From this time Jacob rejected romance as idle, and devoted himself to writing scientific and historical works for the education and, enlightenment of the Flemish and Dutch nobility. His Heimelicheit der Heimelicheden (c. 1266) is a translation of the Secreta secretorum, a manual for the education of princes, ascribed throughout the Middle Ages to Aristotle. Van der Naturen Bloeme is a free translation of De natura rerum, a natural history in twenty books by a native of Brabant, Thomas of Cantimpré; and his Rijmbijbel is taken, with many omissions and additions, from the Historia scholastica of Petrus Comestor. He supplemented this metrical paraphrase of scripture history by Die Wrake van Jherusalem (1271) from Josephus. He also translated a Life of St. Francis (Leven van St. Franciscus) from the Latin of Bonaventure. Jacob's most extensive work is the Spiegel Historiael, a rhymed chronicle of the world, translated, with omissions and important additions, from the Speculum historiale of Vincent de Beauvais. It is dedicated to Count Floris V and was begun in 1283, but was left unfinished at the poet's death. Continuations were given by Philip Utenbroeke and Lodewijc van Velthem, a Brabant priest. He wrote three Arthurian works: Torec, which survives in the massive Lancelot-Compilatie;, and two romances based on the works of Robert de Boron, Historie van den Grale and Boec van Merline, which tell the stories of Joseph of Arimathea and Merlin.

Van Maerlant is also the author of a number of strophic poems, which date from different periods of his life. Of these the best known is the Wapene Martijn ("Alas! Martin") so called from the opening words. It is a dialogue on the course of events held between the poet himself and a character named Martin. Altogether there are three parts, of which the above-mentioned is the first. The other two parts are known as Dander Martijn ("Second Martin") and Derden Martijn ("Third Martin").

Other poems of this kind are Van ons Heren wonden, a translation of the hymn Salve mea! o patrona; Die Clausule van der Bible, an allegorical poem in praise of the Virgin Mary; the Disputacie van onser Vrouwen ende van den helighen Cruce, which bewails the sad situation of the Holy Land. Jacob's last poem Van den Lande van Oversee was written after the fall of Acre (1291) and is a stirring summons to a crusade against the infidels, with bitter complaints about abuses in the Church. The Geesten were edited by Franck (Groningen, 1882). Complete editions of the strophic poems were given by E. Verwijs (Groningen, 1880) and by J. Franck and J. Verdam (Groningen, 1898).

Based on doctoral research (Van Anrooij 1997), it is now thought likely that van Maerlant was also the author of the hitherto anonymous Van neghen den besten ("Nine of the Best"). This would be his last work. It is one of the few works with European distribution whose source text was written in Middle Dutch. The work had a profound and lasting impact on the honor code of the Western European knightly elite.

Jacob died in the closing years of the 13th century. The greater part of his work consists of translations, but he also produced poems which prove him to have had real original poetic faculty. Among these are Die Clausule van der Bible, Der Kerken Clage, imitated from a Complainte of Rutebeuf, and the three dialogues entitled Martijn, in which the fundamental questions of theology and ethics were discussed.

Although Jacob was an orthodox Roman Catholic, he is said to have been called to account by the priests for translating the Bible into the vulgar tongue. In spite of his orthodoxy, Jacob was a keen satirist of the corruptions of the clergy. He was one of the most learned men of his age, and for two centuries was the most celebrated of Flemish poets.

Jacob van Maerlant is the modern name of a medieval Dutch author, who called himself Jacob van Merlant. Merlant was the name of a harbour at the island of Oost-Voorne, which was part of the County of Holland (and Zeeland), where the viscount of Zeeland held residence. In the 14th century Merlant disappeared from the map and became a part of the city of Brielle, also known as Den Briel. In the year 1261 or shortly after Jacob got a job as a 'custos' at the church of Saint Martin at Merlant, from which he took his second name.

The date and year of his birth are unknown. Estimates usually range between 1230 and 1240, due to the 'fact' that his oldest work, Alexanders geesten (The deeds of Alexander [the Great]), was probably written (shortly) after 1260. Also unknown is where Jacob was born and from what parents or family. His language has been analyzed by the Dutch linguists Amand Berteloot and Evert van den Berg, who came to the conclusion that he grew up and learned to speak in the County of Flanders, somewhere south of the city of Bruges, Belgium.

Also unknown is when and where Jacob died. Tradition holds that Jacob must have been alive in 1291, because he is considered to be the author of a poem Vanden lande van Overzee (On the Land across the Sea [the Holy Land]), which was written as a 'complaint' of the fall of the last Christian city in the Holy Land, Saint-Jean d'Acres. This poem however, which survived in only one manuscript (UB Groningen, Ms. 405), has no name attached to it in the manuscript itself. None of the texts in this manuscript bears the name of its author. But since the main body of this manuscript is Jacob van Maerlant's translation/adaptation of Petrus Comestor's Historia scholastica, traditionally known as Rijmbijbel (rhymed Bible) and Jacob's adaptation/translation of Flavius Josephus's De bello judaeico. In his recent edition of the oldest surviving manuscript (BR/KB Brussel, Ms. 15001) Maurits Gysseling treats Jacob's Josephus-translation as belonging to the Comestor-translation, yet it is a different text which Jacob named Die wrake van Jherusalem (The vengeance of Jeruzalem), thereby showing his interpretation of what happened – and why it happened – during the Jewish revolt against the Roman oppressors, which ended in the capture of Jeruzalem and the destruction of the Temple by emperor Vespasianus' son Titus in AD 70. Nineteenth century Dutch scholars who where used to consider rhymed texts as 'poetry' were not too happy with Jacob's rhyming couplets, which they thought were lacking poetical beauty, so they needed his authorship of these 'real' poems at the end of manuscript to prove that he was a real poet or could be a real poet, if only he wanted to.

That Jacob was the author of this poem Vanden lande van Overzee was based on a verse in the 19th and last stanza: "Ghi heren, dit is Jacobs vont. (v. 235): Gentlemen, this is Jacob's creation". This is no evidence in the modern sense of the word, but in the middle of the nineteenth century it was more than enough proof that – considering the subject and the way the poet expresses humself – could not have been anybody else than Jacob van Maerlant. Fact is that Jacob only called himself Jacob when he was young and before he went to Merlant at Oost-voorne. Than he called hemself 'Jacob (die coster) van Merlant'. At older age when he was known and famous as the author of Scolastica in dietschen alias the Rijmbijbel, finished on march 25th 1271, hi simply called himself 'Merlant'. It was not uncommon in medieval literature to use alloniems to give a text more 'weight'. It is very well possible that some poet used the name Jacob – if it wasn't his name, and an often given name to celebrate the apostle Jacobus who lied buried in Santiago de Compostella – to make the impression that it was written by the famous Jacob van Maerlant. The same technique was used to appoint Jacob of Maerlant as the author (and inventor!) of a Dutch poem about the Nine Worthies. In this case the 'pia fraus' was written in Latin.

Recent examination of the manuscript Groningen 405 by bookhistorian Jos Biemans has revealed that this codex is a mixture of older and younger quires. Jacob's Scolastica/Wrake belongs to the younger part, Vanden lande van Overzee to the older part. It took probably some 10 years (1330–1340)? to write and to assemble this book, which was presumably done in the Brabantine city Den Bosch for the nearby monastery 'Marienweerd'. Most likely the main guideline to collect the quires into one codex was not the authorship of Jacob van Maerlant but the virgin Mary, which is in perfect harmony with the name of the monastery 'Marienweert'. To make a long story short: there is no real evidence or reason to think that this manuscript Groningen 405 has to be a 'Maerlant'-collection. There is too much wishful thinking involved.