There are seven titles (referred to as ranks) in the New York City Police Department Auxiliary Police:[2]

In 1950, the 81st Congress of the United States of America passed the Public Law #920, entitled "The Civil Defense Act of 1950" authorizing a Federal Civil Defense Program. In 1951, the New York State Legislature enacted the "Defense Emergency Act" requiring New York City to recruit, train, and equip volunteer Civil Defense wardens who would provide traffic and crowd control and other assistance to police officers in the event of an emergency or natural disaster.

Auxiliary Police recruits must pass a 24 week "Auxiliary Police Basic Training Course" which is classified as "Peace Officer Training". Auxiliary recruits are required by the New York State Municipal Police Training Council to undergo and pass this training course before they become Auxiliary Police officers. The training given in this course includes training in penal law, police science, powers of a peace officer, radio use, unarmed self defense, self defense with a straight wood baton, first aid, handcuffing techniques, and arrest procedures.

In 2008, the NYPD revised the training course to include training in location and use of pressure points, dealing with domestic violence situations, firearm safety, and terrorism awareness. A written and physical exam is given at the end of training. Upon the completion of the Basic Training Course, the physical exam, and the written exam, probationary Auxiliary Police officers are issued their shield and police identification card along with their baton and initial uniform allowance voucher.[3]

All Auxiliary Police officers are required by New York State to pass an annual refresher course in the use of force with the straight baton, arrest procedures, and Equal Employment Opportunity (EEO) in order to maintain their peace officer status.

Auxiliary Police officers are certified as "Peace Officers without Firearms Training" by the New York State Division of Criminal Justice Services-Municipal Police Training Council and are registered as peace officers in the NYS DCJS registry of peace officers.

Although volunteers, Auxiliary Police officers are city employees while on duty and may be eligible for Workers' Compensation in the event of injury while on duty. 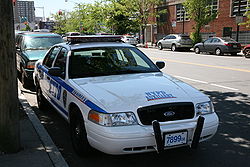 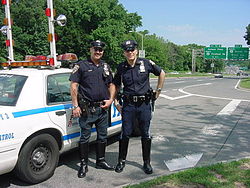 A pair of Auxiliary Police Officers in the Highway Patrol unit.

Auxiliary Police officers increase the public's perception of police "omnipresence" by patrolling in police cars, on foot and on bicycle. The police cars, known as RMPs or Radio Motor Patrols, are dark blue or black with white decals or white with light blue decals. Auxiliary Police officers wear virtually the same uniform as regular officers, and are equipped with straight wood batons, bullet resistant vests, police radios directly linked to the Central Dispatcher, other Auxiliary officers, and regular officers, flashlights, whistles, handcuffs, memo books, and reflective traffic vests. Their badge is a seven point star, in contrast to the shield worn by regular officers.[5]

Auxiliary Police officers patrol presence, observations and reporting of incidents requiring regular police response, as well as interacting with the public, are meant to aid in crime reduction and enhance relations between the community and the police.

Role of the Auxiliary Police Officer

Precinct Patrol: Officers patrol their respective precinct. When performing foot patrol, the area of the precinct that the officer patrols is called a Patrol Area, which are divided into "Foot Posts". RMP and Bike Patrol are also performed.[8]

Housing Bureau: Officers patrol their respective Housing (Police Service Area) precinct, mainly being a uniformed presence within the NYC housing projects. When performing foot patrol, the area of the precinct that the officer patrols is called Patrol Areas, which are divided into "Foot Posts". RMP and Bike Patrol are also performed.[8]

Transit Bureau: Officers patrol their respective Transit District precinct. When performing foot patrol, the area of the precinct that the officer patrols is called a Patrol Area, which are divided into "Foot Posts". RMP Patrol is also performed.[8]

Auxiliary Patrol Support Unit (APSU): Auxiliary Police version of the NYPD's Emergency Services Unit (ESU). Officers wear the same uniform as regular NYPD ESU officers. They assist regular ESU units involving jobs such as dangerous conditions, rescues, vehicle accidents, lockouts, blackouts, blocked roads, natural disasters and other non-tactical calls where ESU is needed. These units carry many specialized tools, generators, lighting and other necessary gear in their vehicles to assist with said jobs. This unit is able to monitor and transmit on both local precinct radio frequencies as well as the SOD (Special Operations Division) citywide frequency. Unlike precinct patrol Auxiliary units, this unit patrols their entire respective patrol borough covering multiple precincts. Officers in this unit are required to go through extra training.[13] As of April 2007, this unit is suspended from patrols for retaliatory reasons, and it is unknown when and if this unit will be allowed to resume patrols. NYPD is currently under investigation by the New York Department of Labor's Public Employee Safety and Health Bureau (PESH) for discriminatory actions taken against the APSU for speaking out on Auxiliary Police safety issues. As of June 30, 2010 all APSU members were transferred to regular patrol assignments. Update as of July 2011. NYPD blatantly refused to reverse the discrimination and wrongdoing on its part. PESH turned out be completely impotent organization without any enforcement capabilities. Investigation into the Safety complaint is still open and passed 1 year mark. PESH has no set time-fame in which it must complete its safety investigations, and PESH is using it to mask its complete inability to affect any changes for the safety of Auxiliary Police Officers, NYPD. It is a wide spread opinion among the members of the Auxiliary Program that PESH and NYPD should be held criminally liable should there be Line of Duty Injuries or Deaths attributed to concerns raised in the safety complaint. For all intents and purposes APSU is disbanded; however it was never officially disbanded through the departmental orders. It raised the concerns among numerous Auxiliary Police Officers that NYPD is perpetrating fraud by diverting APSU intended funds towards other purposes (For instance an EMT class was organized by the NYPD. Despite that most of the students were not members of the APSU, they were instructed to lie should they be questioned about their unit affiliation and state that they are in fact assigned to the APSU) - As of June 2010, the APSU is disbanded and no longer authorized unit [14][15]

Special Task Unit (STU): Officers patrol citywide to high crime areas all over the city that need special attention and extra patrol. However, more typical of this unit is traveling to precincts in Queens and Brooklyn during special events such as concerts, marathons, etc. to increase the police presence. They do not confine themselves to one location or precinct.[16]

Undercover Vice Ops: Officers that have not reached the age of 20 years and 6 months old can be utilized to assist the NYPD Vice Unit for "Quality of Life enforcement" stings which address illegal alcohol, knife, and spray paint sales. Other than this exception, NYPD Auxiliary Police officers are never undercover (*unless authorized by the Police Commissioner or Commanding Officer of the Auxiliary Police) and always patrol in uniform. Officers who have received the necessary "Vice Training" may be used by their Command in non-hazardous surveillance with the supervision of regular police officers.[17]

The Auxiliary Police also has a Ceremonial Unit made up of a small group of Auxiliary officers.[18] 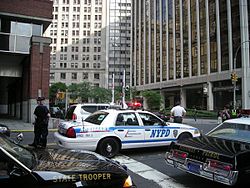 Patrol is one of the most important duties Auxiliary officers can perform. Various types of patrols are possible within different precincts. Almost all precincts perform foot patrol. Other types of patrol include:

The NYPD emulates the safety of its Auxiliary Police officers by requiring that they not pursue dangerous situations, but rather to remove themselves from such danger immediately. During training, recruits are repeatedly told that their purpose is to be the "eyes and ears" of the Police Department, and they are not required to enforce the law unless absolutely necessary. Although they are equipped with wood batons and (optional) handcuffs, they are told that their most powerful weapon is the police radio, which allows them to call for back-up officers to the scene. Auxiliary Police officers are not issued, nor are permitted to carry firearms while on duty, even if they are police officers/peace officers or licensed gun owners.

Up until March 26, 2007, the NYPD did not issue or subsidize ballistic vests to Auxiliary officers. But after the shootings of Pekearo and Marshalik, Mayor Michael R. Bloomberg and Commissioner Raymond W. Kelly asked the New York City Council to earmark more than 3.3 million dollars to provide all Auxiliary Police officers with Level IIIA Vests, the same used by full-time officers. On March 27, 2007, the City Council approved this bill, which had all Auxiliary officers equipped with vests. Since then, in 2010, funding for vest for Auxiliary Police Officers has ran out of the NYPD City Budget. Every Police Precinct, Housing Police Service Area and Transit District has a pool of "loaner" vest for new Auxiliary Police Officers to use while on patrol, afterwards, they are returned and secured by the Auxiliary Coordinator.[21]

In recent years a group calling itself the Auxiliary Police Supervisors Benevolent Association (APSBA,) has attempted to compete with the APBA. It's membership numbers are unknown, but believed to be in the dozens.

Since the establishment of the New York City Police Department Auxiliary Police, 7 officers have died in the line of duty.[22]