The Anabantidae are a family of perciform fish commonly called the climbing gouramies or climbing perches. As labyrinth fishes, they possess a labyrinth organ, a structure in the fish's head which allows them to breathe atmospheric oxygen. Fish of this family are commonly seen gulping at air at the surface of the water; which then passes out of their gills or mouth when they dive beneath the surface. 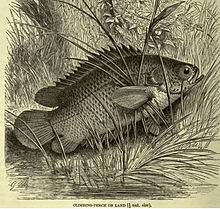 The climbing gouramies originate from Africa to India and the Philippines. They are primarily a freshwater fish and only very rarely found in brackish water. An egg-layer, they typically guard their eggs and young.

Climbing Gouramis are so named due to their ability to "climb" out of water and "walk" short distances. Their method of terrestrial locomotion uses the gill plates as supports and the fish pushs itself using the fins and tail.