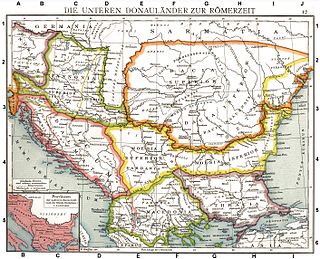 19th century map of the Lower Danube Region in the Roman era, Taurisci settling in the Noricum Province

The Taurisci were a federation of Celtic tribes who dwelt in today's northern Slovenia (Carniola) before the coming of the Romans (c. 200 BC)[1] According to Pliny the Elder, they are the same people known as the Norici.[2][3] The denotation probably stems from Celtic taur meaning "mountain", like in Tauern, and therefore may also refer to highlanders in general.

Affiliated with the Celto-Ligurian Taurini, the Taurisci settled on the upper Sava river after their defeat at the Battle of Telamon in 225 BC. In the wake of the Boii they migrated to northern Italia and the Adriatic coast. The Greek chronicler Polybius (ca. 203–120 BC) mentioned Tauriscian gold mining in the area of Aquileia. With the troops of the Roman Republic they were defeated by invading Germanic Cimbri and Teutons at the Battle of Noreia in 112 BC.

The identity of Taurisci and Norici has not yet been conclusively established: According to historian Géza Alföldy, the Norici were one tribe of the larger highlandic Taurisci federation, while the Reallexikon der germanischen Altertumskunde defines the Norici as Celts settling in the Regnum Noricum in present-day Carinthia with the Taurisci as their southeastern neighbours. Other people settling in the region were the Pannonians in the south-east of Carniola, in the south-west lived the Iapydes, an Illyrian tribe, and the Carni, a Venetic tribe.