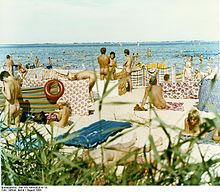 A nude beach is a beach where users are legally at liberty to be nude. Sometimes the terms clothing-optional beach or free beach are used. Nude bathing is one of the most common forms of nudity in public. As beaches are usually on public lands, any member of the public is entitled to use the facilities without membership of any movement or subscription to any philosophy. The use of the beach facilities is normally anonymous. Unlike a naturist resort or facility, there is normally no membership or vetting requirement for the use of a nude beach. The use of nude beach facilities is usually casual, not requiring pre-booking. Nude beaches may be official (legally sanctioned), unofficial (tolerated by residents and law enforcement), or illegal. However, nude beaches are relatively few and some distance from cities, and access is at times more difficult than at a regular beach and the facilities at these beaches tend to be very basic.

Nudist woman getting onto a horse on a clothing-optional beach.

A nude beach should not be confused with a topless beach (or topfree beach), where upper body clothing is not required for women or men, although a swimming costume covering the genital area is required for both men and women. Nude beaches first became popular in the 1950s along the French coast[1] and have since spread around the world, though they are still few and far between. Some nude beaches are part of a larger nude area, such as the Cap d'Agde area. Most beaches in Denmark[2] and all beaches in Norway are clothing-optional.[citation needed]

Nude beaches tend to be segregated or isolated physically from the non-nude areas. In other instances people maintain a comfortable space between beach users. Signage is often used to warn beach users about what to encounter and/or to segregate different areas on the beach. This accommodates people who are not comfortable with nudity (see gymnophobia). This also accommodates beach users who do not like to be watched too much, especially by clothed individuals (see voyeurism).

On an officially sanctioned nude beach beach goers of both sexes have an option to remove their clothing without fearing legal prosecution or official harassment.

Clothes free organizations and free beach associations, such as the Naturist Action Committee, lobby for the removal of laws which prohibit nude swimming and sunbathing. 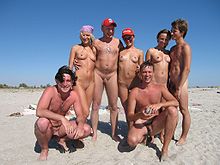 Naturists on a nude beach 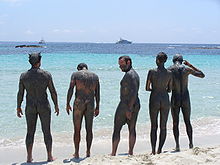 Covered in clay on a Spanish beach

Family in Praia do Abricó, Brazil 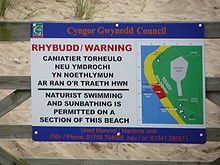 Bilingual sign in Welsh and English at Morfa Dyffryn, an officially sanctioned nude beach in Wales

Most nude beaches had become accepted after many years of use as nude beaches. Many are "unmanaged" beach areas that have been adopted by the local users in an effort to maintain the beach's "quality". Others' right to existence has been recognized as such by the appropriate local authority, and are termed "official" (although not necessarily legitimate).

There are several categories of nude beaches:

Most beaches around the world, including nude beaches, are on public lands. That means that though private resorts and hotels that adjoin a beach may enclose their property behind fences with controlled access, most countries do not allow private ownership of the actual beach area. Thus, while a resort can control access and set clothing standards on its property, these standards would not necessarily apply to the beach itself, which remains subject to local laws or customs, and public access to the beach itself usually remains unrestricted. This applies, for example, to the islands in the Caribbean, Mexico, and Florida. On the Seven Mile Beach in Negril, Jamaica, for example, though the beach is lined with private resorts with fences down to the sand/waterline, the beach itself is open to the public. Though actual clothing standards vary from resort to resort, the beach area is officially designated as "topfree", and public access is unrestricted.

However, unlike nudist resorts and hotels, which can enforce standards of conduct on their properties promptly and effectively, most nude beaches are on public lands, making the enforcement of standards of nude beach etiquette a more personal matter, subject to the deterrence of local laws. The standards of conduct take different forms in different countries. Other than the fact that people using a nude beach expect to find naked people on the beach, most other local laws and customs continue to apply. One should note especially that nude beaches are usually family beaches with children being present.

Nude beaches around the world

Main article: List of places where social nudity is practiced

There are numerous nude beaches around the world, some of which are legally recognised as such and others which are unofficially tolerated. There are also numerous other venues, such as swimming pools, where nude bathing is accepted.

The first nude beach of the United States was established in San Gregorio in Northern California in 1967,[6] as a private "free beach".[7] The number of official nude beaches in the United States has recently increased because of the stewardship of national and local nudist organizations and the establishment of working relationships with—or lobbying of—local municipalities and law enforcement agencies. The tourist potential of clothing-free and topless events and facilities is increasingly being recognized.[8]