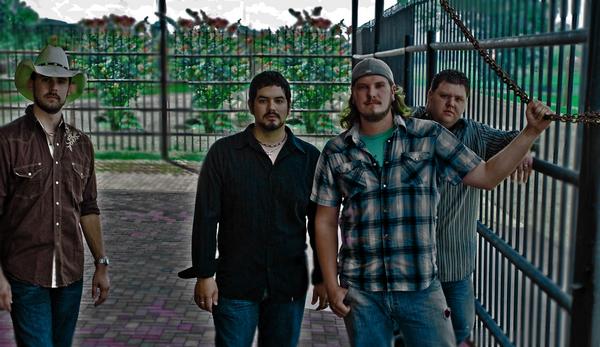 Highspeed Hayride is an American band established in 2002 in Victoria, Texas. The band consists of Eugene Moreno III on lead vocals and rhythm guitars, Shelby David Stockton, Jr. on bass guitar and harmony vocals, Matthew Groll on drums and Bo Carter on lead guitar and harmony vocals. Highspeed Hayride has released three independent albums including "Lights of Town" (2004), "Thought You Should Know" (2006) and the self-titled album "Highspeed Hayride" (2008). Highspeed Hayride has shared the stage with many of their childhood heroes as well as their comrads. Some artists the band has shared the stage with include: ,,,,,,,,,,,and many more!

The tale of Highspeed Hayride is a simple one indeed. Since day one, the band has never expected anything from anyone and never asked for a handout. After observing many others rise and fall, Highspeed Hayride took the step, gritted their teeth, and vowed to succeed on their own volition and with their integrity unbroken. Since spring 2002 the band has taken as much work as possible, covered several hundred thousand miles all across the Midwest, met thousands of new friends, stayed in ratty motels when tips would cover it or the floor of a fan’s house when they didn‘t, and drove two vehicles and several trailers into the ground doing it.

Many friendships were forged during this period with folks from every town they stopped in. Never a group known for putting themselves above the fans, the boys would step off stage amidst the crowd and visit with new and old friends and would usually use their bar tab to buy a fan a beer if they couldn’t afford a shirt. These people have become die-hard supporters of the band and seem more like members of the group rather than patrons of a venue. Dubbing themselves “Speed Freaks” they help the guys spread their music like butter on toast, and will happily do anything possible to make Highspeed Hayride a household name.

Highspeed Hayride’s music isn’t hard to define even though it wears no badge. The band composes songs bred from within, shedding the smoke and lights for straight- up southern country music. While drawing ideas from the early Texas Country and 90’s alternative scenes, with a quick listen you can hear hundreds of other musical influences and directions pushing through the mix like flowers on a sidewalk. Using this, Highspeed Hayride molded a sound that is sincere and unique. Their lyrics range from happy to haunting, and the solid back beat pulls you right in. The band has forever been exactly as they present themselves to be and never wanted to be chained down by definition- they want to put out real, honest music.

Highspeed Hayride’s fans are almost as difficult to define as the group itself. The fan base, ranging from teenagers to old-timers, hippies to presidents, is constantly bulging at the seams with new fans joining the ranks every day. Whether these folks are tired of being bombarded by corporate music, wanting a band with great tunes that can play them well, or just looking for music with substance, they are turning to Highspeed Hayride for the answer.

Gene is the “front man” for the group, supplying lead vocals and rhythm/ lead guitar. He was born in South Texas and grew up on a ranch in Goliad County. Gene is one of the principal songwriters of the band, supplying a hefty portion of the songs on the first two albums and penning every tune on the third. He’s a good old country boy with enough college hours to be a doctor, and is a very driven individual, obsessed with success. He stresses the small things but his attention to detail is priceless when composing music with the band.

David is the bass player, harmony vocalist, and a songwriter for the band. Being the only son to a South Texas blues musician he learned the ropes at a young age. While it’s rumored he has ADD, the truth is his brain runs at full throttle and sometime it‘s hard to keep up. David channels his seemingly unlimited energy into his stage performance. Broken low B string? …check. He has unlimited patience and makes a hobby out of repairing broken equipment. The soldering kit he tucks under the seat comes in handy more times than not. David has a heart of gold and knows no strangers.

Matt is the drummer and youngest member of the group. While growing up on a small ranch in Victoria county he quelled boredom by spinning his parent’s old Gary Stewart and Eagles records on a dusty record player for hours on end. Matt’s folks were avid dancers and their constant trips to Schroeder Hall when he was a child afforded him a chance to connect with the musicians. Matt was known as “The Kid” and was often found at the end of the night asleep next to the drum kit with cotton shoved in his ears. Often referred to as the “long haired country boy” of the band, Matt’s laid back nature, common sense attitude, and the simple way he goes about his work keeps the band grounded and solid.

Bo is the newest addition to Highspeed Hayride. He hails from Lake Jackson, Texas and plays lead guitar and sings harmony vocals. Bo is also a dedicated songwriter and one day hopes get his own side- project off the ground. While long time friends, Bo didn’t actually join the group until early 2008 when a chance meeting brought everyone together. His dedication to the band and his willingness to do anything asked of him make him indispensable to his band mates. The band has seen a couple of member changes over the years while searching for the last puzzle piece and, finally, the piece fits. His talent blended with the already formidable lineup creates an unstoppable tour de force that leaves you wanting more. He’s also a great guy to have around if it ever comes down to fisticuffs.

2008 finds Highspeed Hayride releasing their third album (self titled) and burning up the highway and charts. Staying true to themselves, the band independently funded and recorded the new album with a small group of friends, the way they wanted to, and it has turned out to be the band’s most moving work to date. Painstakingly recorded between tours, the project is a true representation of Highspeed Hayride. Check the calendar and don‘t miss your chance to get involved with this group. They will gladly welcome you to their camp with open arms. “Real music, for real people, done right” was the goal and they hit the mark.

In 2006, "Thought You Should Know" (produced by Mike McClure, formerly of ) spawned two Texas Music Chart Singles. The first, a revamped version of the song "Drivin' My Life Away scored top 40 chart position peaking at #34. The second single, "Get Out of My Way"(EM3,BMI), penned by lead singer Gene Moreno reached #30 on the Texas Music Chart.

In 2008, Highspeed Hayride went to ' Bismeaux Studio, owned by legendary front man of , to record their third independent album, the self-titled "Highspeed Hayride". The group enlisted friend and fellow musician Billy Jo High to produce and play lead guitar on the album. The first single, "Boots" claimed the #19 spot on the Texas Music Chart with a follow up single soon to follow.

"Highspeed Hayride's sound is so fresh and new, these tunes would fit nicely on any country radio station. They sound great!"
Rondal HuckabyKeyboards, George Strait's Ace in the Hole Band


“This is most defiantly the band to keep an eye peeled for. When Highspeed came to town everyone knew it. Fresh sound and great harmonies; catch them once and you’ll be hooked!”
Michael Tucker, Drums-

“Highspeed Hayride puts everything they’ve got into everything they do and it shows. Check them out once, and you’re hooked. I added HH a couple of months ago and the response had been huge!”
JR Schumann-KIXS 107.9 FM, Victoria, TX

“Highspeed Hayride has come a long way in few short years. I’ve been impressed with the way their sound has developed and I think they will soon be headlining shows at venues all over Texas and beyond!”
Frank Edwards-KRYS 99.1 FM, Corpus Christi, TX