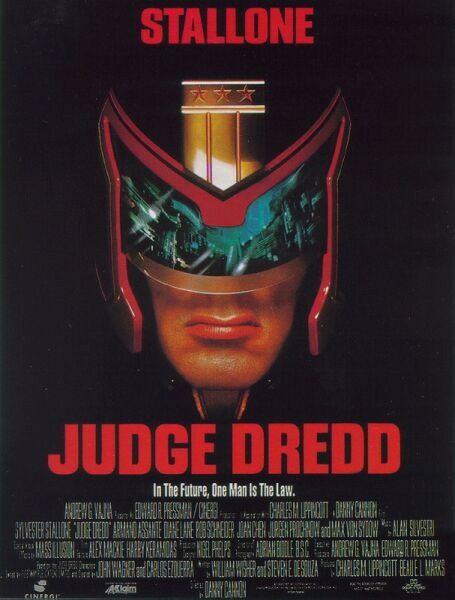 "Judge Dredd" is a 1995 directed by , and starring , , , and . The is based on the strip in the British comic "2000 AD". Certain elements of the film were altered from the comic series, but it still did not find wide mainstream appeal. From the beginning the film was intended to receive a PG-13 rating. Due to excessive violence the MPAA refused to downgrade the initial R rating despite repeated appeals by the studio and Stallone. Mostly because of schedule constraints the film could not be re-cut and was released with an R rating. Fact|date=June 2007

The plot for the film borrows heavily from the comic strip arc "The Day the Law Died", by John Wagner with the role of murdered Chief Justice Goodman falling to Fargo, and aspects of Chief Justice Cal being shared between Griffin and Rico. Dredd being framed for a crime he didn't commit, and sentenced to penal servitude, recalls events in "The Day the Law Died." The movie also adapts elements from "The Return of Rico" (the presence of Rico Dredd) and "The Judge Child Quest" (the presence of the , although the movie depicts the Angels as cannibalistic religious fanatics, rather than the mercenaries they are in the comics).

The year is 2139. It is a future where people live in violent megacities. The place is Mega City One, located in The Cursed Earth: a radioactive desert wasteland formerly known as the USA and violent "block wars" are regularly fought by citizens with machine guns.

In order to combat the rising crime rate, the Mega Cities have created special police forces known as the Street Judges, who have the power to act as judge, jury, and, if need be, executioner.

Heavily armored, trained to perfection, and equipped with highly efficient, customized weapons, the judges roam the streets. And the judges live by a very stringent code in order to prevent misuse of their powers.

One of them has become legend. He ranks as the highest street judge and has been on the streets longer than any other judge. He is Judge Joseph Dredd (), who has been created as part of The Janus Project, a failed genetic engineering program that was intended to create the perfect street judge.

Dredd is idolized by many of the other judges, especially the young cadets at the academy, but he is also feared, and considered dangerous and a menace by more conservative parts of society. News anchors have made it their business to question every step he takes.

A prominent TV news reporter later gets killed, and the incident is captured on video. The killer was wearing the uniform of a street judge, and wearing Dredd’s badge.

Dredd is immediately taken to court, where it also turns out that the bullet that killed the victim was clearly shot from Dredd’s lawgiver gun -- a gun locked by a device that takes and verifies a DNA sample before it allows handling and firing of the weapon.

Sentenced to life behind bars at an Aspen Penal Colony, Dredd's transport plane is shot down en route to the prison by a family of Cursed Earth mutants, providing him with an opportunity to clear his name.

It turns out that as part of an elaborate plot to reactivate the long-dormant Janus project, Griffin had Rico frame Dredd for the murder.

Dredd must make his way back to Mega City One to prevent Griffin and Rico from creating an army of cloned super-criminals.

The film contains several elements that are at odds with the comic series: the face of Judge Dredd is shown in deference to the film's expensive star; a love interest is allowed to develop between Dredd and (), something that is strictly forbidden between Judges in the comics, and the movie is largely missing the ironic humour of the original strip.

tallone's view of the film

Thirteen years after the release of "Judge Dredd", Sylvster Stallone discussed his feelings about the movie in an issue of "Uncut" magazine:

cquote|I loved that property when I read it, because it took a genre that I love, what you could term the 'action morality film' and made it a bit more sophisticated. It had political overtones. It showed how if we don't curb the way we run our judicial system, the police may end up running our lives. It dealt with archaic governments; it dealt with cloning and all kinds of things that could happen in the future. It was also bigger than any film I've done in its physical stature and the way it was designed. All the people were dwarfed by the system and the architecture; it shows how insignficant human beings could be in the future. There's a lot of action in the movie and some great acting, too. It just wasn't balls to the wall.

But I do look back on "Judge Dredd" as a real missed opportunity. It seemed that lots of fans had a problem with Dredd removing his helmet, because he never does in the comic books. But for me it is more about wasting such great potential there was in that idea; just think of all the opportunities there were to do interesting stuff with the Cursed Earth scenes. It didn't live up to what it could have been. It probably should have been much more comic, really humorous, and fun. What I learned out of that experience was that we shouldn't have tried to make it "Hamlet"; it's more "Hamlet and Eggs"... [Sylvester Stallone interviewed in "Uncut" #131 (April 2008), p.118]

Film composer was originally set to score the film, having collaborated with director on his previous film, The Young Americans. Eventually, Arnold was replaced by film composing veteran , but as post-production dates fell further and further behind, Goldsmith was forced to drop out of the project as well, due to prior commitments to score other films ( and Congo). In the end, was selected as the new composer and would go on to score the final film.

The song "Judge Yr'self" by the was originally going to be on the soundtrack. Their guitarist disappeared in early 1995, and since the song was the last written with him in the band, it never made it to the final soundtrack listing. The song was not released until 2003.

Although his association with the project was brief, still managed to compose and record an original piece of trailer music for the film. The music was most notably featured in the film's initial teaser trailer, which was comprised solely of Goldsmith's music (with the exception of a short opening quotation by the film's narrator ) set to a montage of footage from the film. Subsequent trailers in the Judge Dredd's advertising campaign re-used the trailer music in various edited forms. The piece has remained popular over time, as the music has been used on many subsequent movie trailers (Lost in Space, The Phantom, Inspector Gadget, Paycheck), and re-recordings of the music have been featured on film music compilation albums ("Hollywood '95" featuring conducting the and "Trailer Project: Coming Soon - Previews of Coming Attractions" by John Beal).

* The futuristic taxis used in the film are actually 101 Forward Control vehicles (a British Army Gun Tractor from the 1970s & '80s) with a new body shell designed by David Woodhouse. 31 driveable vehicles were built for the film. [ [http://www.talkingpix.co.uk/Reviews%20-%20Judge%20Dredd.html Judge Dredd ] ]