The Cow protection movement was the movement that demanded end of cow slaughter in British India.[1] The movement gained momentum with the support from Arya Samaj and its founding father Swami Dayananda Saraswati. Swami Dayananda and his followers travelled across India which led to the establishment of cow protection societies in various regions of India starting at 1882. In 1893, during the peak of this movement and immediately after an order from a British magistrate who asked Muslims who wanted to sacrifice to register, violence broke out in Mau in Azamgarh district which in the following months culminated in riots across Northern India spreading its tentacles all the way to Bombay and Rangoon.

The movement antagonised many Muslims, who saw it as a Hindu tool of oppression. 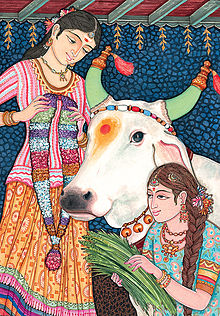 The cow is a sacred animal in the Hindu religion. Dairy products are extensively used in Hindu culture and are one of the most essential nutritional components of Hindu meals. Panchagavya, a mixture of five products of cow milk, curd, ghee, urine and dung,[2] is consumed in Brahmanical rituals. The mixture is also smeared on ulcers as a healing product.[3]

Veneration of the cow increased during medieval times when the rate of cow slaughter increased phenomenally. It is also believed that Muslim sacrifice of cows during Bakr-Id also led to an increase in cow veneration among Hindus.[4]

Arya Samaj propounded the idea that Hindus should cleanse their religion and return to the purer form of Hinduism which existed during Vedic times. While this movement rejected idol worship, polytheism, child marriage, widow celibacy, the caste system by birth and the spiritual superiority of Brahman priests, it accepted the practice of cow worship.[5][6]

In a treatise called Gokarunanidhi, (Ocean of mercy to the cow), published by Dayananda Saraswathi in 1881[7] the author strongly opposed cow slaughter as an anti-Hindu act. Dayananda and his followers travelled all across India giving lectures and founding societies. The advent of trains, buses, and printing presses aided in a much wider dissemination of their messages.

It is also argued that British policy during that time strengthened the organization. In 1888, a high court in Allahabad ruled that cows are not “sacred” animals as defined in section 295 of the Indian Penal Code and Muslims could not be held accountable for slaughtering them.[8]

Muslims used to sacrifice cows during the Bakr-Id festival. Though goat slaughter is also permitted in Islam, cows are cheaper; cow slaughter also became a symbol of Muslims asserting their rights and not bowing down to the demands of their Hindu neighbors.[9] Beef was a popular food for the British living in India as well.[10]

Historians[11] argue that the symbol of the cow was used as a means of mobilizing Hindus. In the 1870s, cow protection movements spread rapidly in the Punjab, the North-West provinces, Awadh and Rohilkhand. Arya Samaj had a tremendous role in skillfully converting this sentiment into a national movement.

The first Gaurakshini sabha (cow protection society) was established in the Punjab in 1882.[12] The movement spread rapidly all over North India and to Bengal, Bombay, Madras and other central provinces. The organization rescued wandering cows and reclaimed them to groom them in places called gaushalas (cow refuges). Charitable networks developed all through North India to collect rice from individuals, pool the contributions, and re-sell them to fund the gaushalas. Signatures, up to 350,000 in some places, were collected to demand a ban on cow sacrifice.[13]

During Dayananda’s time, cow protection was not much regarded as an anti-Muslim phenomenon, and he attempted to build a rational and respectable movement around this sentiment. It gradually became an issue of communal rivalry as it became a legal issue and calls for a legal ban on cow slaughter were raised.[14]

Cow protection sentiment reached its peak in 1893. Large public meetings were held in Nagpur, Hardwar and Benares to denounce beef-eaters. Melodramas were conducted to display the plight of cows, and inflammatory pamphlets were distributed, demonizing those who sacrificed and ate them. Riots broke out between Hindus and Muslims in Mau in the Azamgarh district; it took 3 days for the government to regain control.

The rioting was precipitated by contradictory interpretations of a British local magistrate's order. He had apparently asked all the Muslims interested in cow slaughter to register, which undertaking was in fact performed to identify problem-prone areas. However, Muslims had interpreted this as a promise of protection for those who wanted to perform sacrifices.[15]

The series of violent incidences also resulted in a riot in Bombay involving the working classes, and unrest occurred in places as far away as Rangoon, Burma. An estimated thirty-one to forty-five communal riots broke out over six months and a total of 107 people were killed.[16][17][18]