U.S. Route 97 in Oregon
"OR 4" redirects here. OR 4 may also refer to Oregon's 4th congressional district.

In the U.S. state of Oregon, U.S. Route 97 is a major north–south United States highway which runs through the state of Oregon (among other states). In Oregon, it runs from the Oregon-California border, south of Klamath Falls, to the Oregon-Washington border on the Columbia River, between Biggs Junction, Oregon and Maryhill, Washington. Other than the northernmost stretch (which is known as the Sherman Highway), US 97 (along with U.S. Route 197) is known as The Dalles-California Highway. In May 2009, Oregon Senate passed a bill to rename U.S. Route 97 as "World War II Veterans Historic Highway".

With the exception of Interstate 5, US 97 is the most important north–south highway corridor in the state. It serves two major population centers (Klamath Falls and Bend), and is the main corridor east of the Cascade Mountains. While much of the highway remains in two-lane undivided configuration, significant sections have been upgraded to expressway or freeway status.

The run of US 97 in Oregon (running from south to north) starts at the border between Oregon and California, south of the city of Klamath Falls. The highway starts out as a two-lane road, running through the arid Klamath River basin. Approaching the city of Klamath Falls, 97 becomes a freeway just south of the junction with OR 140 and OR 66. The freeway then runs along the western edge of the downtown region, ending at an interchange with Oregon Route 39 near the Oregon Institute of Technology. Within Klamath Falls is a business route, which runs through downtown via Main Street/Klamath Avenue and Esplanade Avenue, then which turns back to the US 97 mainline via the East Side Bypass (this latter segment co-signed with OR 39).

In La Pine is a junction with Oregon Route 31; this city marks the start of the Deschutes River recreation area; (Crane Prairie Reservoir, the river's source, is located due west of La Pine). North of La Pine, the highway becomes an expressway as it passes by the resort community of Sunriver and heads towards the city of Bend.

In Bend, the highway travels on a RIRO expressway known as the Bend Parkway (though transportation officials like to claim the Parkway is not a freeway—it has a lower speed limit than the non-Interstate maximum of 55 mph (90 km/h) in Oregon); a business route runs parallel to the Parkway along 3rd Street (the prior route of US 97 before the parkway was built). Expected interchange construction over the approaching years will increase the RIRO distance miles past the southern city limits of Bend, linking up with prior ODOT improvements and eliminating two of the five traffic signals along US 97 in Bend, and in the entire 44 miles[1] between La Pine and Redmond. Similar upgrades are possible at the northern boundary of Bend, dependent upon taxpayer and state approval.[2][3] In Bend one finds interchanges with the Century Drive Highway, as well as U.S. Route 20. The busiest part of US 97 is in Bend, with an average of 42,000 cars a day.

North of Bend, the highway continues as an expressway until it reaches the city of Redmond. US 97 follows a new alignment bypassing the downtown area, with the old route designated U.S. Route 97 Business. It maintains a standard 55 mph speed limit on the northern section of this parkway.[4] In Redmond is an intersection with Oregon Route 126. Continuing north out of Redmond, one enters a high desert region marked by numerous deep river gorges, including the Crooked River gorge (which 97 passes over near the Peter Skene Ogden State Scenic Viewpoint and rest area). Towns along the route include Terrebonne, which provides access to Smith Rock State Park, a climbing mecca, and Culver. North of Culver, the highway enters the agricultural community of Madras.

South of Madras is an intersection with U.S. Route 26 headed eastbound; the two routes share an alignment through the city. On the northern edge of town, 97 forks off to the right, heading northeast; and 26 continues northwest towards Portland. The importance of 97 as a transportation corridor diminishes north of Madras, as most traffic continues to Portland.

South of the community of Shaniko, US 97 forks off its only spur route, U.S. Route 197 which continues heading parallel to the Deschutes River towards Tygh Valley and The Dalles. 97 takes a more easterly course, passing through the high desert region of the Columbia Plateau. Towns along the route include Grass Valley and Wasco. Just south of Biggs Junction, the highway descends from the plateau into the Columbia River Gorge. In Biggs is an interchange with Interstate 84 and U.S. Route 30; immediately north of the interchange is the Biggs Rapids-Sam Hill Bridge over the Columbia River. The river serves as the state line between Oregon and Washington. 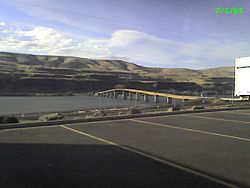 US97 Carried over the Columbia River by the Sam Hil Memorial Bridge, seen from Biggs Junction

US 97 comprises the following highways (see Oregon highways and routes), from south to north:

US 97 Business in Klamath Falls, from south to north, comprises:

US 97 Business in Bend runs from its intersection with the main highway at East 1st Street north of Bend, south on East 1st Street, Deschutes Place, and Wall Street to Newport Avenue, concurrent with U.S. 20 Business, then continues south on a Wall Street-Bond Street couplet and east on Franklin Avenue until it rejoins the main highway at East 3rd Street.

Note: Mileposts are measured from north to south. They do not reflect actual mileage due to realignments.