The Detroit Cobras are an American garage rock cover band from Detroit, Michigan, formed in 1994.

The Detroit Cobras signed with Sympathy for the Record Industry and released their first full-length album, Mink Rat or Rabbit, in 1998. After a three-year gap, they released a second album, Life, Love and Leaving Their retro-garage rock formula proved popular in the UK and prompted the London-based Rough Trade Records[1] to sign the band. They released an EP, Seven Easy Pieces, in 2003 and their third full-length album, Baby, in 2005. Baby broke with the Cobras' tradition in that it included one original song, "Hot Dog (Watch Me Eat)". Baby was picked up for release in the US by Bloodshot[2] (who added the songs from the Seven Easy Pieces EP to the end of Baby . In April 2007, Bloodshot released the band's fourth full-length, Tied & True.

The band is known for multiple lineup changes, as noted in the side bar. They generally have a touring lineup different from their recording lineup. Greg Cartwright of Reigning Sound (aka Greg Oblivian of The Oblivians) has been a constant creative force along with Nagy and Ramirez, who have been around since the group's genesis. 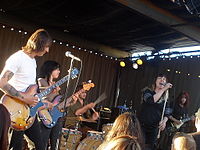