Not to be confused with horsefly.

The housefly (also house fly, house-fly or common housefly), Musca domestica, is a fly of the suborder Cyclorrhapha. It is the most common of all domestic flies, accounting for about 91% of all flies in human habitations, and indeed one of the most widely distributed insects, found all over the world; it is considered a pest that can carry serious diseases. 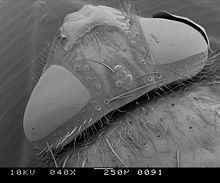 A scan of a house fly taken at 40 magnifications under a scanning electron microscope.

The adults are 8–12 mm long. Their thorax is gray, with four longitudinal dark lines on the back. The whole body is covered with hair-like projections. The females are slightly larger than the males, and have a much larger space between their red compound eyes. The mass of pupae can range from about 8 to 20 mg under different conditions.[1]

Like other Diptera (meaning "two-winged"), houseflies have only one pair of wings; the hind pair is reduced to small halteres that aid in flight stability. Characteristically, the media vein (M1+2 or fourth long vein of the wing) shows a sharp upward bend. Species that appear similar to the housefly include:

Anatomy of a housefly

Each female fly can lay approximately 500 eggs in several batches of about 75 to 150.[2] The eggs are white and are about 1.2 mm in length. Within a day, larvae (maggots) hatch from the eggs; they live and feed on (usually dead and decaying) organic material, such as garbage or feces. They are pale-whitish, 3–9 mm long, thinner at the mouth end, and have no legs. They live at least one week. At the end of their third instar, the maggots crawl to a dry cool place and transform into pupae, colored reddish or brown and about 8 mm long. The adult flies then emerge from the pupae. (This whole cycle is known as complete metamorphosis.) The adults live from two weeks to a month in the wild, or longer in benign laboratory conditions. After having emerged from the pupae, the flies cease to grow; small flies are not necessarily young flies, but are instead the result of getting insufficient food during the larval stage.[3]

The male mounts the female from behind

Some 36 hours after having emerged from the pupa, the female is receptive for mating. The male mounts her from behind to inject sperm. Copulation takes between a few seconds to a couple of minutes.[3] Normally the female mates only once, storing the sperm to use it repeatedly for laying several sets of eggs.

Housefly pupae killed by parasitic wasp larvae. Each pupa has one hole through which a single adult wasp emerged; feeding occurs during the wasp's larva stage. 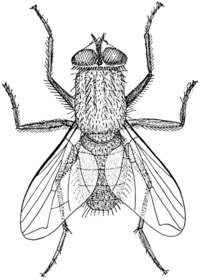 Illustration of a housefly

The flies depend on warm temperatures; generally, the warmer the temperature the faster the flies will develop. In winter, most of them survive in the larval or the pupa stage in some protected warm location.[3]

Houseflies feed on feces, open sores, sputum, and moist decaying organic matter such as spoiled food, eggs, fruit and flesh.[4] Houseflies can take in only liquid foods. They spit out saliva on solid foods to predigest it. They also regurgitate partly digested matter and pass it again to the abdomen.

Even though the order of flies (Diptera) is much older, true houseflies are believed to have evolved in the beginning of the Cenozoic era, some 65 million years ago.[6] They are thought to have originated in the southern Palearctic region, particularly the Middle East. Because of their close, commensal relationship with man, they probably owe their worldwide dispersal to co-migration with humans.[3]

In colder climates, houseflies survive only with humans. They have a tendency to aggregate and are difficult to dispel. They are capable of carrying over 100 pathogens, such as typhoid, cholera, salmonella, bacillary dysentery, tuberculosis, anthrax, ophthalmia, and parasitic worms. Some strains have become immune to most common insecticides.

House flies feed on liquid or semiliquid substances beside solid material which has been softened by saliva or vomit. Because of their high intake of food, they deposit feces constantly, one of the factors that makes the insect a dangerous carrier of pathogens. Although they are domestic flies, usually confined to the human habitations, they can fly for several miles from the breeding place. They are active only in daytime, and rest at night, e.g., at the corners of rooms, ceiling hangings, cellars, and barns, where they can survive the coldest winters by hibernation, and when spring arrives, adult flies are seen only a few days after the first thaw.

Housefly as a transmitter of disease

Mechanical transmission of organisms on its hairs, mouthparts, vomitus and feces: