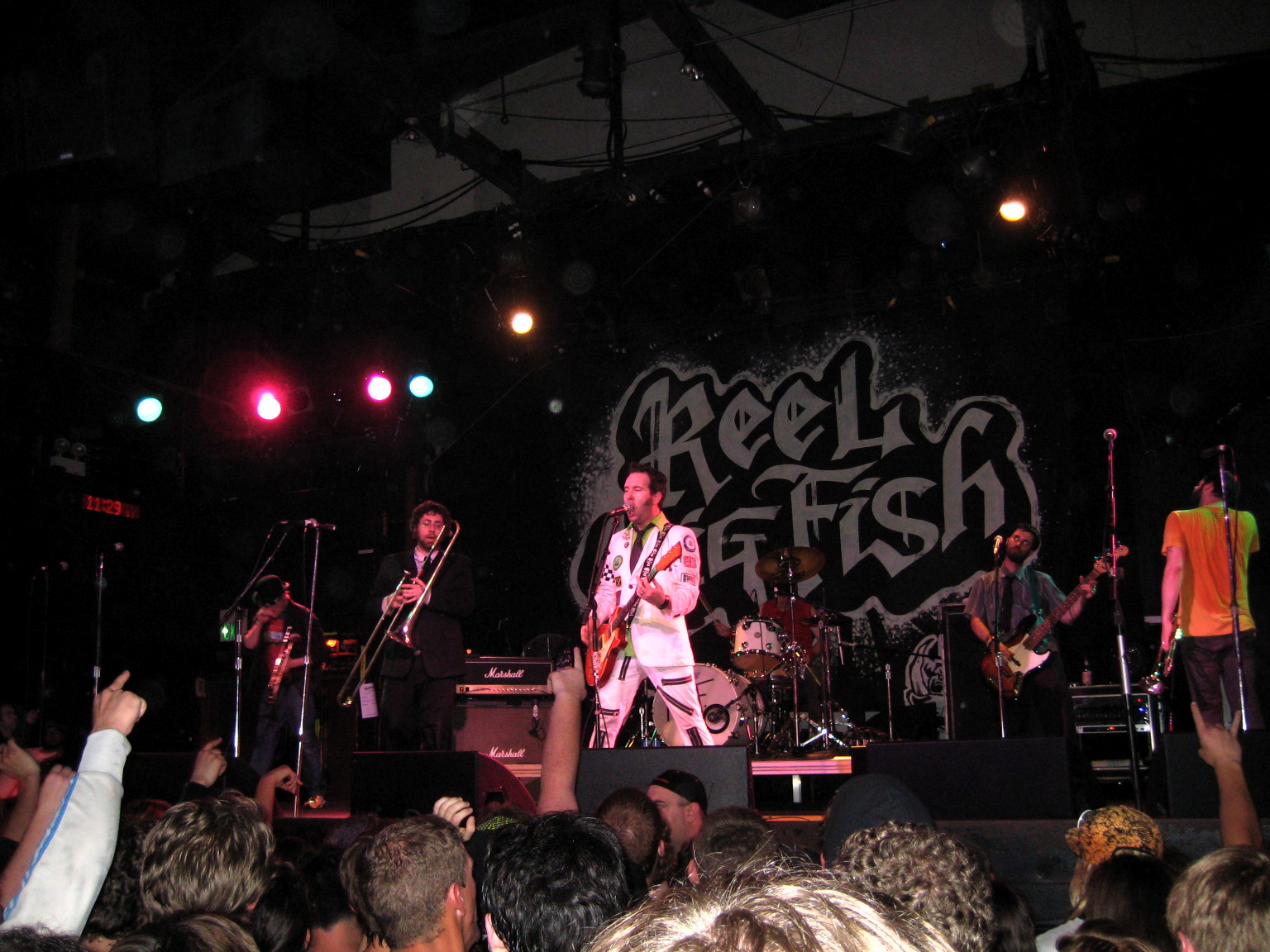 Reel Big Fish is an American band from , best known for the 1997 hit "Sell Out." The band gained recognition in the mid-to-late 1990s, during the third wave of ska with the release of the album "". Since the band's founding in 1992 and their demo "", the only original member remaining is .

The band's debut album, "Everything Sucks", was an underground hit and led to a deal with . The album "" established the band in the ska punk scene, and they began touring throughout the United States. After the single "Sell Out" began breaking into the mainstream, including , the album made an appearance on the charts. However, the ska revival was short-lived, and their 1998 album "" did not lead the band into the mainstream. In 1998, the band appeared in the movie "", performing in the stands to pump up the crowd. "Why Do They Rock So Hard?" was the last album for three members of the band. Trombonist Grant Barry and trumpet player Tavis Werts were either fired or left the band voluntarily, depending on the source. Drummer Andrew Gonzales left the band to spend more time with his family. Reel Big Fish then had a rotating cast of drummers and trumpeters over the next six years.

In 2002 the band fared much better on the rock charts, particularly because of the single "Where Have You Been?", which did not prominently feature the horn section. Former drummer Carlos de la Garza played drums and ex- Tyler Jones tracked trumpet for two songs on "" (because Werts had already done the majority of recording before his departure). De la Garza's last concert with Reel Big Fish was on , at the in Anaheim. That concert was later released as the DVD "". Jones played live in Reel Big Fish for some further time before being fired by Barrett for his excessive drinking. He was replaced by former Forces Of Evil trumpet player John Christianson.

On , , Reel Big Fish released their fourth album on ; "". Justin Ferreira (who replaced De La Garza) was on drums for the recording, but left before the album's release to join the Orange County band (Island Records) and subsequently is listed as an additional musician on the CD. He was replaced by .

Aaron Barrett has stated that "" was "the third record in a trilogy" that began with "". "The first one was about being in a band and trying to make it. Then "" was like, 'we've made it, we're rock stars'. "Cheer Up" we made because we had to make it. But "" is about us being old and jaded now." [ [http://www.inmusicwetrust.com/articles/70h07.html In Music We Trust - INTERVIEW: Reel Big Fish: Aaron Barrett discusses 15 minutes of fame, new record, and SKA's next generation ] ]

While on tour in early 2006, Reel Big Fish received a call from , informing them that they had been dropped from the label, much to the band's delight. The band formed their own label and released a 3-disc live performance CD/DVD set, "". This package became available on , on the Internet and in retail stores on August 22. Jive later released a Reel Big Fish greatest hits album, "", because they owned the rights to all previous songs. The band did not approve of, or make any money from the album, and have spoken out against it.On February 20, 2007, the band released "", which is a split EP with "". It features six cover songs (three from each band), with the vocalist of each band performing in the other band's songs (except in the case of singing in the song, "Say Say Say".) Reel Big Fish announced on their profile that they would be playing a summer tour in 2007 with as their headlining partner along with support from and .

Reel Big Fish released their first studio album since leaving ; "" worldwide on , , on the record label. On , , shortly before its release, the band announced in a Myspace blog that was leaving the band to spend more time with his wife and newborn child. He was replaced by who played bass in and Aaron Barrett's now defunct side project, . Since Matt Wong was very popular with fans, some are skeptical of the new bassist's ability, but the band has stated that Derek is "Matt Wong Approved" and fans have nothing to worry about. Gibbs had been filling in for Wong on various tours since early 2002.

* and were also members of . [ [http://www.thelittlestmanband.com/ The Littlest Man Band Official Site] ]

* , and were also members of , along with former members of and other Orange County musicians. This band broke up in early 2005.Fact|date=April 2008

* Scott Klopfenstein was also a member of a ska band called the .Fact|date=April 2008

* has a project called . Notably, he remixed Reel Big Fish's cover of "Talkin' Bout A Revolution", incorporating different sound bites, including Ali Tabatabaee from Reel Big Fish's live DVD, "You're All In This Together".Fact|date=April 2008