Diagram of the male pelvic and reproductive organs

The path that sperm takes from production to ejaculation

Ejaculation is the ejecting of semen (usually carrying sperm) from the male reproductory tract, and is usually accompanied by orgasm. It is usually the final stage and natural objective of male sexual stimulation, and an essential component of natural conception. In rare cases ejaculation occurs because of prostatic disease. Ejaculation may also occur spontaneously during sleep (a nocturnal emission or "wet dream"). Anejaculation is the condition of being unable to ejaculate.

Premature ejaculation is when ejaculation occurs before the desired time. If a man is unable to ejaculate in a timely manner after prolonged sexual stimulation, in spite of his desire to do so, it is called delayed ejaculation or anorgasmia. An orgasm that is not accompanied by ejaculation is known as a dry orgasm.

Video of an ejaculation.

When a man has achieved a sufficient level of stimulation, ejaculation begins. At that point, under the control of the sympathetic nervous system, semen containing sperm is produced (emission).[3] The semen is ejected through the urethra with rhythmic contractions.[4] These rhythmic contractions are part of the male orgasm. They are generated by the bulbospongiosus muscle under the control of a spinal reflex at the level of the spinal nerves S2-4 via the pudendal nerve. The typical male orgasm lasts several seconds.

After the start of orgasm, pulses of semen begin to flow from the urethra, reach a peak discharge and then diminish in flow. The typical orgasm consists of 10 to 15 contractions, although the man is unlikely to be consciously aware of that many. Once the first contraction has taken place, ejaculation will continue to completion as an involuntary process. At this stage, ejaculation cannot be stopped. The rate of contractions gradually slows during the orgasm. Initial contractions occur at an average interval of 0.6 seconds with an increasing increment of 0.1 seconds per contraction. Contractions of most men proceed at regular rhythmic intervals for the duration of the orgasm. Many men also experience additional irregular contractions at the conclusion of the orgasm.[5]

Ejaculation begins during the first or second contraction of orgasm. For most men the first spurt occurs during the second contraction. The first or second spurt is typically the largest and can contain 40 percent or more of the total ejaculate volume. After this peak the flow of each pulse diminishes. When the flow ends, the muscle contractions of the orgasm continue with no additional semen discharge. A small sample study of seven men showed an average of 7 spurts of semen (range between 5 and 10) followed by an average of 10 more contractions with no semen expelled (range between 5 and 23). This study also found a high correlation between number of spurts of semen and total ejaculate volume, i.e., larger semen volumes resulted from additional pulses of semen rather than larger individual spurts.[6]

Most men experience a refractory period immediately following an orgasm, during which time they are unable to achieve another erection, and a longer period again before they are capable of achieving another ejaculation. During this time a male feels a deep and often pleasurable sense of relaxation, usually felt in the groin and thighs. The duration of the refractory period varies considerably, even for a given individual. Age affects the recovery time, with younger men typically recovering faster than older men, though not universally so.[8]

However, some men are able to achieve sufficient sexual arousal immediately after ejaculation, and others may have refractory periods of fewer than 15 minutes. A short recovery period may allow them to seamlessly continue sexual play from one ejaculation to sexual stimulation in preparation for the next. However, other men are averse to stimulation during the early part of the refractory period.

There are men who are able to achieve multiple orgasms, with or without the typical sequence of ejaculation and refractory period. Some of those men report not noticing refractory periods, or are able to maintain erection by "sustaining sexual activity with a full erection until they passed their refractory time for orgasm when they proceeded to have a second or third orgasm".[9] 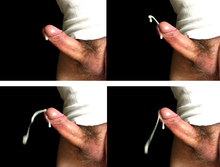 The force and amount of semen that will be ejected during an ejaculation will vary widely between men and may contain between 0.1 and 10 milliliters.[10] (By way of comparison, note that a teaspoon is 5 ml and a tablespoon holds 15 ml.) Adult semen volume is affected by the time that has passed since the previous ejaculation; larger semen volumes are seen with greater durations of abstinence. It is not clear whether frequent ejaculation increases,[11] reduces[12] or has no effect[13] on the risk of prostate cancer. The duration of the stimulation leading up to the ejaculation can affect the volume.[14] Abnormally low volume is known as hypospermia. One of the possible underlying causes of low volume or complete lack of semen is ejaculatory duct obstruction. It is normal for the amount of semen to diminish with age.

The number of sperm in an ejaculation also varies widely, depending on many factors, including the time since the last ejaculation,[15] age, stress levels,[16] and testosterone. Greater lengths of sexual stimulation immediately preceding ejaculation can result in higher concentrations of sperm.[14] An unusually low sperm count, not the same as low semen volume, is known as oligospermia, and the absence of any sperm from the semen is termed azoospermia.

Most first ejaculations (90 percent) lack sperm. Of the few early ejaculations that do contain sperm, the majority of sperm (97%) lack motion. The remaining sperm (3%) have abnormal motion.[17]

^a Ejaculate is jellylike and fails to liquify.
^b Most samples liquify. Some remain jellylike.
^c Ejaculate liquifies within an hour.

Control from the central nervous system

To map the neuronal activation of the brain during the ejaculatory response, researchers have studied the expression of c-fos, a proto-oncogene expressed in neurons in response to stimulation by hormones and neurotransmitters.[18] Expression of c-fos in the following areas has been observed:[19][20]

For most men, no detrimental health effects have been determined from ejaculation itself or from frequent ejaculations, though sexual activity in general can have health or psychological consequences. A very small percentage of men may experience a transient Postorgasmic illness syndrome following ejaculation.[21][22]