The Basilica of St Gregory the Great at Downside, commonly known as Downside Abbey, is a Roman Catholic Benedictine monastery and the Senior House of the English Benedictine Congregation. One of its main apostolates is a school for children aged nine to eighteen. Its graduates are known as Old Gregorians.

Both monastery and school are located at Stratton-on-the-Fosse, southwest of the English city of Bath. 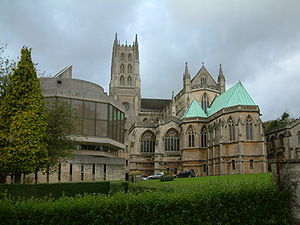 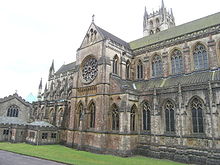 The community was founded at Douai, Flanders, then in the Spanish Netherlands, in 1605, under the patronage of St. Gregory the Great (who had sent St Augustine to England in 597). The founder was Saint John Roberts, who became the first prior and established the new community with other English monks who had entered various monasteries in the Spanish Benedictine Congregation, notably that at Valladolid. In 1611 Dom Philip de Caverel, abbot of St. Vaast's Abbey at Arras, built and endowed a monastery for the community.

The Priory of St. Gregory's, Douai, was therefore the first English Benedictine house to renew conventual life after the Reformation. For nearly 200 years the monastery trained monks for the English mission and six of these men were beatified by Pope Pius XI in 1929. Two of them, SS John Roberts and Ambrose Barlow, were among the Forty Martyrs of England and Wales canonized by Pope Paul VI in 1970.

Expelled from France during the French Revolution, after a period of imprisonment, in March 1795 the community were permitted to proceed to England. They settled for some 20 years as guests of Sir Edward Smythe at Acton Burnell, Shropshire, before finally settling at Mount Pleasant, Downside, in Somerset, in 1814.

The Monastery was completed in 1876 and the Abbey Church in 1925, being raised to the rank of a minor basilica in 1935 by Pius XI.

The building of Downside Abbey Church was begun in the 19th century, and ended with completion of the nave after World War I. The Abbey Church houses the relics of St Oliver Plunkett, an Irish martyr, who entrusted his body to the care of a Benedictine monk of the English Benedictine Congregation. The church is one of only three in the United Kingdom to be designated a minor basilica by the Roman Catholic Church, the others being St. Chad's Cathedral in Birmingham and Corpus Christi Priory, Manchester.

The church is built in the Gothic Revival style, and is designed to rival in size the medieval cathedrals of England that were lost to the Catholic Church through the Reformation. A magnificent ensemble of work is represented by a galaxy of architectural talent of the late nineteenth and early twentieth centuries. The earliest part is the richly decorated transepts by Archibald Matthias Dunn and Edward Joseph Hansom, dating from 1882. The choir is the masterpiece of Thomas Garner (who is buried there), dedicated in 1905. The soaring nave by Giles Gilbert Scott (c. 1923-25) remains unfinished, with its western wall in crude Lias stone standing bare and undecorated. The Lady Chapel is acknowledged as one of the most complete and successful schemes of Sir Ninian Comper, with a reredos and altar furnishings incorporating medieval fragments and a reliquary containing the skull of St Thomas de Cantilupe. The tower, completed in 1938, at 166 feet (55m), is the second highest in Somerset. The choir stalls are modelled on the famous stalls in Chester Cathedral.

Downside Abbey has been designated by English Heritage as a grade I listed building.[1] Sir Nikolaus Pevsner described the Abbey as "the most splendid demonstration of the renaissance of Roman Catholicism in England. If ever there was an excuse for building in period forms in the twentieth century, it is here".

The first pipe organ at Downside was built in 1805 by George Pike England[2] of Tottenham Court Road[3] for the The Music Room in Brighton Pavilion: when removed in 1882 to the South Transept gallery of the new church, it consisted of 16 stops over 2 manuals and pedals.[4] Removed to the parish church of Saint Vigor in nearby Stratton-on-the-Fosse in 1907, it survives today somewhere in America, having been sold following water damage sustained in Stratton during 1969.[5]

The England organ was to be replaced in 1905[6] with a new instrument by Garrard of Lechlade,[7] consisting of three manuals and 55 speaking stops: it was supplied two years later by the renamed firm of Garrard, Spooner & Amphlett, but was never completed satisfactorily.[8]

The current organ in the Abbey Church was built by John Compton in 1931 to replace the Garrard organ: it has 142 speaking stops over four manuals and pedals.[8] This extraordinarily large number of stops is derived from a mere 38 ranks of pipes by means of extension and transmission. The whole instrument is enclosed within three stone and concrete chambers with swell shutters facing upwards, except the Tuba box which speaks down into the transept.[8] Unusually, the casework (designed by Giles Gilbert Scott and carved by Ferdinand Stuflesser of Ortesei in the Austrian Tyrol)[8] has no pipefronts: it is of solid oak with fretwork, but has no roof: consequently, the whole organ speaks up into the transept vaults and projects itself down the nave remarkably well. The console, a typical Compton luminous stop button affair which faces West from near the crossing down the North side of the Nave, is made from timber from H.M.S. Bellerophon, which transported Napoleon after the Battle of Waterloo.[8]

George Gervase was born at Bosham, Sussex in 1569, and seems to have been received into the Catholic Church when he was aged about thirty. He studied for the priesthood at the English seminary at Douai and was ordained in 1603. In 1604 he came to England to begin his missionary work among the recusant Catholic families. In February 1605 he was arrested and banished, at which time he returned to his old college in Douai. In September 1607 he returned to England, but before doing so he visited the monastery of St Gregory at Douai and was clothed as a novice. His novitiate was to be in England, but proved to be very short.

He was arrested only two months after his return to England and condemned to death for his refusal to take the new oath of allegiance, accepting the King as the head of the Church. He was brutally martyred on 11 April 1608 at the age of thirty-nine years.

John Roberts was born in North Wales in 1576 and educated at St John's College, Oxford and the Inns of Court, London. He was received into the Catholic Church in Paris and entered the English seminary at Valladolid, Spain, in 1598. In the following year he joined the Benedictine Order and made his vows at St Martin's Abbey, Compostella on 26 April 1600. He was ordained to the priesthood in 1602 and arrived in England in 1603, where he was appointed vicar of the English monks of the Spanish Congregation on the Mission.

Though arrested, imprisoned and banished, he returned four times. During one exile, he played a role in the foundation of St Gregory's at Douai in Flanders. On his fifth visit to England, whilst working in London, he was seized immediately after Mass on Advent Sunday 1610 and dragged through the streets, still wearing his vestments. He was arrested for the crime of being a Catholic priest; and instead of taking the oath against papal authority for his freedom, he refused.

On 10 December 1610 he was drawn to Tyburn where he was hanged and quartered. Two nights later his body was rescued by a party of Catholics, and his relics were taken to St Gregory's, Douai.

Maurus Scott was born in about 1578 of Protestant parents in Chigwell, Essex. He studied law at Cambridge and in 1603 met John Roberts and was received into the Church. He entered a Benedictine monastery in Spain, made his vows and was ordained to the priesthood in 1610. It was at this time that he went to Douai where he stayed at St Gregory's before crossing over to England. He arrived in England in time to witness the martyrdom of St John Roberts and was himself arrested and imprisoned for a year before being banished to France. On his arrival in France he went to St Gregory's and asked to be received into the community. After staying there for a few months he returned to England and once more was arrested.

On 25 May 1612 he was tried at the Old Bailey and condemned to death for being a Catholic priest. He was taken to Tyburn where he was hanged.

Ambrose Barlow was born in 1585, the son of Sir Alexander Barlow, a fervent Lancastrian Catholic. He entered the English seminary in Douai in 1608 and in 1610 was sent to continue his studies at Valladolid, Spain, returning to Douai two years later.

On a visit to England in 1614 he was imprisoned, and on release he returned to Douai where he entered the Benedictine community of St Gregory's, where he made his vows on 5 January 1616. After his ordination in 1617 he was sent to England, where he worked diligently on the English Mission in Lancashire for twenty-four years. He was four times arrested for the crime of being a Catholic.

Shortly after celebrating Mass on Easter Sunday, he was arrested by the local Anglican parson and a mob numbering 400, tried and condemned for being a Catholic priest. He was hanged and quartered at Lancaster on 10 September 1641.

Philip Powell was born in Wales in 1594. He studied in London and then became a novice at St Gregory's in Douai in 1619. After making his vows and being ordained to the priesthood, he returned to England where he was chaplain to the Poyntz family at Leighland in Somerset.

Whilst sailing to South Wales, he was arrested, taken to London and imprisoned. At his trial he freely acknowledged that he was indeed a Benedictine monk and a priest.

On 30 June 1646 he was drawn on a hurdle to Tyburn where he was hanged until dead and then quartered. His only crime was that of being a Catholic priest.

Thomas Pickering was born in 1621 and in 1660 made his vows at St Gregory's in Douai as a lay brother. In 1665 he was sent to London to be steward for the Benedictine monks who were chaplains to the Catholic wife of King Charles II.

In 1678 Titus Oates bore false witness that Blessed Thomas had attempted to shoot the King. The story was believed and he was arrested.

Although reprieved by the King many times, pressure to execute Blessed Thomas was too great, and on 9 May 1679 he was taken to Tyburn where he was hanged drawn and quartered.

Downside School is a Roman Catholic public school situated near Bath. Monks from the Priory of St. Gregory the Great, which had been established at Douai, Flanders, in 1606, and contributed to a college at the University of Douai, first arrived at Downside in 1814.

During the nineteenth century Downside remained a small monastic school. It was Dom Leander Ramsay who was the founder of modern Downside. He planned the new buildings that opened in 1912 and now form two sides of the Quad.