Mark Feltham (Born, Bermondsey, Southwark, London[1]) is an English musician best known for his harmonica playing. Feltham is a long term member of the British rhythm and blues band, Nine Below Zero, and Rory Gallagher's band; and is often utilised as a session musician. 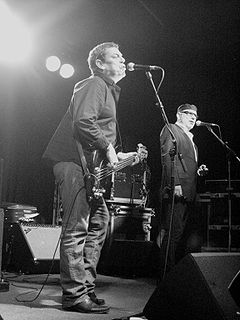 Feltham, right, performing with Gerry McAvoy, to the left, in Nine Below Zero.