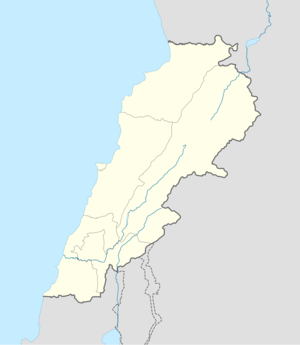 The Name Kousba comes from the word hidden because how the village is hidden in between all the trees and mountains. Kousba is one of the most inhabited villages in the koura district, its is 18km south from and 12km east of , and well placed on the main Highway towards the village . One main highway that runs through Kousba and many other villages is called .

Kousba El-Koura has a population of 4 307 residents, has two schools which are both public and have over 311 students enroled into each of them. In the last municipal elections in 2004, had Kousba 7 193 registered voters with 4 940 voting. Kousba has 23 companies with more than 5 employees. Kousba has no hospitals but has a medical center. Kousba consists of 601 Hectare of lands, including lots of historical monuments, touristic attractions and religious sites such as many churches and monastries, sports clubs, teaching institutions and social clubs.

Late in the 13th century, at Our Lady Monastery in Hamatoura, Saint Jacobbegan his ascetic life. Later, when the monastery was destroyed by theMamelukes*, he reestablished monasticism along the perimeter of the ruinedmonastery. In time, he rebuilt the monastery, regenerating and givingrenewed vigor to monastic life in the area.His spiritual briskness, vivacity, and popularity among believers drew theattention of the Mamelukes who set their minds to stop his verve anddetermination and force him to convert to Islam. He stubbornly refused theirrelentless pressures.When the Mamelukes' horrible coercive attempts failed, they dragged SaintJacob, along with a number of monks and laymen, from Saint GeorgesMonastery, situated atop Mount Hamatoura, to Tripoli City (the capital ofNorthern Lebanon) and handed him to the wali (ruler).For almost a year, he endured tremendous tortures. Nevertheless, he did notgive in or renounce his faith despite receiving both adulations and threatsfrom the Mamelukes.Although intimidated by Saint Jacob's stubbornness and persistence, finally,as was their custom in punishing their enemies, on October 13th, Saint Jacobwas beheaded. In addition, the Mamelukes burned his body to ensure theChurch will not give him an honorable burial as a martyr, a burial befitting asaint.Not long after his death, seeing his sufferings and steadfast faith, our Lordbestowed on him everlasting crowns and graces and today he shines as amartyr as much as he was a beacon during his earthly life; at this time theChurch announced Saint Jacob's holiness and added him to her list ofhonored Martyr Saints and prayed for his intercession.Our Saint was almost forgotten in the course of history. This was due to thesevere sufferings of the Church under various Moslem sultanates that bothweakened Christian spiritual life and resulted in a noticeable drop of Christianliteracy. Additionally, all manuscripts and data that could have been sent andtranslated abroad were either forgotten, lost, or destroyed.However, recorded encounters by the Monastery's pilgrims, upon seeingvisions of Saint Jacob, and many others, who sensed his presence, affirmedand authenticated his sainthood. Glorifying the name of Lord, Saint Jacobalso healed many.We have recently discovered a clear mention of Saint Jacob in a manuscriptpreserved at the Balamand Monastery in a Gerontikon, a hagiography orcompilation of biographical short stories of the lives of holy saints. In aBalamand archival manuscript, numbered 149, it clearly indicates that theChurch commemorates his memory on October 13th.The Monastery of the Dormition of the Theotokos - Kousba, Hamatoura, inLebanon, commemorated his memory, for the first time, on October 13th,2002, in an all-night prayer vigil (agrypnia). A number of priests, deacons,and believers participated in that memorable day, as the attendees chantedSaint Jacob's troparion and Akolouthia, prepared and edited by themonastery's monks.Today, believers and pilgrims are constantly reporting his apparitions,miraculous healings and other Grace-filled deeds. All of this kindled thespiritual fervorness to celebrate the memory of this Saint and give Praise tothe Lord, while honoring Saint Jacob of Hamatoura who is still living amongus in his monastery performing miraculous deeds, calls, and visitations tobelievers.
*Mamelukes: are members of a Moslem sultanate, virtual rulers of Egypt(1250-1517). They were defeated by Napoleon in the Battle of the Pyramids(1798), and destroyed by Mohammad Ali (1811). The Mamelukes wereoriginally a mounted military force, recruited from Circassian or Turkishslaves who converted to Islam, and brought up in the courts of Moslem rulersor caliphs.